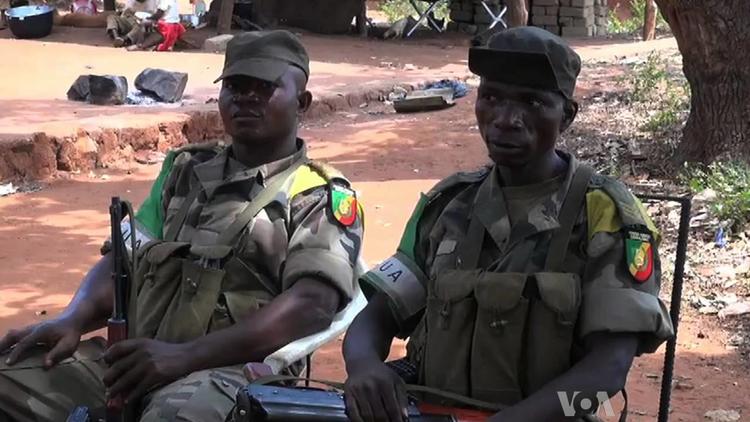 The Central African Republic has a population of 4.5 million, about 15 percent of them Muslim, or about 670,000 people. Those Muslims are now, according to Amnesty International, in serious danger of being ethnically cleansed.

“The group [Amnesty Interntional] said attacks against Muslims had been committed “with the stated intent to forcibly displace these communities from the country,” with many anti-balaka fighters viewing Muslims as “‘foreigners’ who should leave the country or be killed”.

The rights group also said that the attacks against Muslims were committed with the government intending to forcibly displace the Muslims from the country.

To escape the anti-balaka’s deadly attacks, the entire Muslim populace has fled from numerous towns and villages while in others, the few who remain have taken refuge in and around churches and mosques.” “

In a scene out of World War II, a long convoy of Muslims tried on Friday to flee the capital Bangui, meeting with lines of taunting Christians who shouted “We’re going to kill you all.” But to get out of the capital they had to try to go through dangerous Christian neighborhoods, and UN peacekeepers decided to turn them back to a mosque where they could shelter instead.

The tens of thousands of Muslims who have already fled are in a situation of ethnic cleansing according to the UN. (Since there are about 670,000 Muslims in the country, if 67,000 fled abroad, that would be 10 percent).

Christian militias in Bangui say they were originally formed and took up arms to fight off the disproportionately Muslim Seleka (Coalition) rebels who joined in attempts to dislodge the now-overthrown leader of the country Francois Bozizé. The militias have, however, gone well beyond self-defense to active attacks on non-combatant Muslim populations.

Muslims maintain that French and other peacekeepers of Christian background have been reluctant to disarm the Christian militias, concentrating on getting arms away from Muslims and so leaving the latter vulnerable. The Christians call Muslims “balaka,” referring to the machetes wielded by some members of the Seleka (Coalition) Movement.

For tens of thousands of innocent people to be forced out of their country, and for hundreds of thousands to face the same fate in the near term, is a major crisis. You can only imagine the screaming headlines if CAR were a Muslim-majority country and those being ethnically cleansed were Christian. While the situation has been covered in the Western press, it hasn’t received the attention it would have in the former situation.