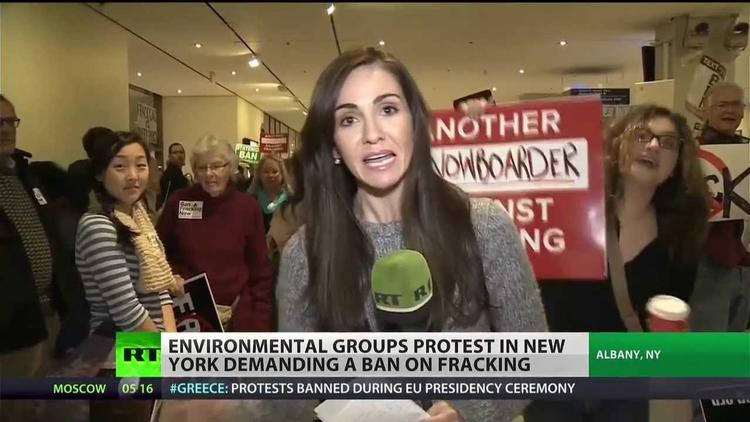 Almost half (47%) of all U.S. wells are being developed in regions with high to extremely high water stress. This means that more than 80 percent of the annual available water is already allocated to municipal, industrial and agricultural users in these regions.

The irony of fracking: It destroys the natural resource it needs most. The tragedy for those living nearby fracking operations: That natural resource is the fresh—and increasingly scarce—water supply on which they, too, depend.

And not only does fracking—or hydraulic fracturing—demand enormous amounts of fresh water no matter where it takes places, a troubling new study released Wednesday found that a majority of places where the controversial drilling technique is most prevalent are the same regions where less and less water is available.

Overlay the regions where most of the fracking is being done in North American with the places experiencing the most troubling and persistent water resource problems and the resulting picture becomes an alarm bell as politicians and the fossil fuel industry continue to push fracking expansion as the savior for the U.S. and Canada's energy woes.

According to the report, Hydraulic Fracturing and Water Stress: Water Demand by the Numbers (pdf), produced by the non-profit Ceres investor network, much of the oil and gas fracking activity in both the U.S. and Canada is happening in "arid, water stressed regions, creating significant long-term water sourcing risks" that will strongly and negatively impact the local ecosystem, communities, and people living nearby.

“Hydraulic fracturing is increasing competitive pressures for water in some of the country’s most water-stressed and drought-ridden regions,” said Ceres President Mindy Lubber, in announcing Hydraulic Fracturing and Water Stress: Water Demand by the Numbers. “Barring stiffer water-use regulations and improved on-the-ground practices, the industry’s water needs in many regions are on a collision course with other water users, especially agriculture and municipal water use."

Richard Heinberg, senior fellow of the California-based Post Carbon Institute and author of a recent book on the "false promise" of the fracking industry, says the irony of the study's findings "would be delicious if it weren't so terrifying."

"Nationally," according to Heinberg, "only about 50 percent of fracking wastewater is recycled. Billions of gallons of freshwater are still taken from rivers, streams, and wells annually for this purpose, and—after being irremediably polluted—this water usually ends up being injected into deep disposal wells. That means it is no longer available to the hydrological cycle that sustains all terrestrial life."

Click here to look at Ceres' interactive map on fracking and water use.

The study drew on industry data detailing water usage from from 39,294 oil and gas wells from January 2011 through May 2013 and compared that information with "water stress indicator maps" developed by the World Resources Institute (WRI).

Over 55 percent of the wells hydraulically fractured were in areas experiencing drought and 36 percent overlay regions with significant groundwater depletion – key among those, California which is in the midst of a historic drought and Texas, which has the highest concentration of shale energy development and hydraulic fracturing activity in the U.S.

In Texas, which includes the rapidly developing Eagle Ford and Permian Basin shale plays, more than half (52 percent) of the wells were in high or extreme high water stress areas. In Colorado and California, 97 and 96 percent of the wells, respectively, were in regions with high or extremely high water stress. Nearly comparable trends were also shown in New Mexico, Utah and Wyoming.

Among hundreds of hydraulic fracturing companies whose water use was evaluated, those with the highest exposure to water sourcing risk are Anadarako (APC), Encana (ECA), Pioneer (PXD) and Apache (APA). Most of the wells being developed by each of these companies are in regions of high or extreme water stress. The top three service providers, Halliburton, (HAL) Schlumberger (SLB) and Baker Hughes (BHI), handled about half of the water used for hydraulic fracturing nationally and also face water sourcing risks.

Although water use for hydraulic fracturing is often less than two percent of state water demands, the impacts can be large at the local level, sometimes exceeding the water used by all of the residents in a county.

"It's a wake-up call," Professor James Famiglietti, a hydrologist at the University of California, Irvine, told the Guardian. "We understand as a country that we need more energy but it is time to have a conversation about what impacts there are, and do our best to try to minimise any damage."

The irony of the latest findings, explained Heinberg in an email to Common Dreams, is based on the fact that "much of the fracking boom is centered in the western United States—Texas, Oklahoma, Colorado, and California—which just happens to be drying up, likely as a result of climate change. And that climate change, in turn, is happening because we're burning fossil fuels like oil and natural gas."

Heinberg observed that the Ceres report is largely written from the standpoint of the oil and gas companies—using much of their data—and directed at those who may be invested or would like to invest in the continuation or proliferation of the industry. However, he indicated, detailing the increasing difficulties the industry and its investors are likely to experience in sourcing water for their operations is still valuable for those opposed to fracking.

"In California, where I live," he said, "we're experiencing a 500-year drought. The grape-wine industry here in Sonoma County is facing disaster. Farmers in the Central Valley are weighing whether to plant at all this year. The fact that California's Democratic governor [Jerry Brown] wants to spend what little water we have on fracking—which will only make our climate problems worse—makes the report frighteningly relevant."

RT reported recently on an anti-fracking demonstration in New York