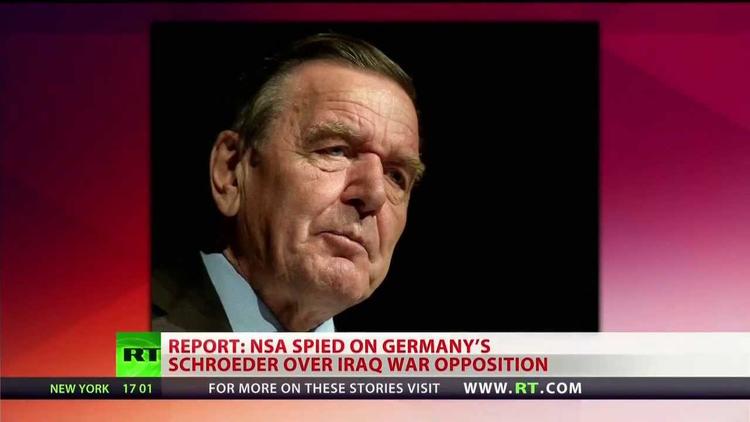 The Guardian reports that the George W. Bush administration put German Chancellor Gerhard Schroeder’s personal telephone under surveillance in 2002. Schroeder was opposed to the Bush-Cheney aggressive war on Iraq.

This surveillance allowed the Bush administration to know where it stood with Germany and NATO. The surveillance continued, on the personal phone of Angela Merkel. There is a rumor that Obama was surprised to find out about the snooping on her personal phone. If true, it tells you how out of control the NSA is. The spying on friendly leaders is proof positive that the spying wasn’t primarily for counter-terrorism.

US spied on German Chancellor Schröder for Iraq War opposition

“US Isolation on Iraq: There were several international and national developments with regard to the coming US attack on Iraq on Wednesday. On Wednesday, German Chancellor Gerhard Schroeder warned in Bild that “any military attack on Iraq could destroy the international coalition against terrorism.” He said, “This fight (against terrorism) is not yet won and that is why I am warning against an attack on Iraq,” adding “It will not be well understood as a means of defence and could destroy the international alliance against terrorism.” Bild likewise reported that the Christian Democrat candidate in the upcoming elections, Edmund Stoiber, *also* said, “New commitments abroad by the Bundeswehr [German military] are not on the agenda.”

AFP reported that the European Union diplomats insisted that all diplomatic means to resolving the conflict with Iraq be exhausted before a military solution was adopted.

So this was probably the speech that caused President George W. Bush to place Schroeder under personal surveillance, using the National Security Agency. Not allowed to oppose Bush’s illegal aggressive war on Iraq.