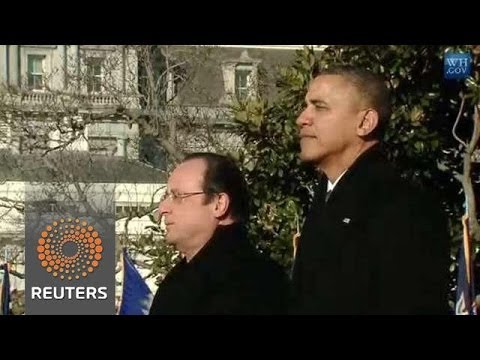 The first is foreign policy, including Iran, Syria and the Israeli-Palestinian struggle.

Re: negotiations with Iran, Obama said, “Our unity with our P5-plus-1 partners, backed with strong sanctions, has succeeded in halting and rolling back key parts of the Iranian nuclear program.” He underlined that next week’s further negotiations with Iran in Vienna “will be an opportunity for Iran to show that it is serious about a comprehensive solution that assures the world that its nuclear program is for peaceful purposes only.”

This is the first time I can remember an American politician putting the issue in this way. Mostly they simply assume that Iran’s uranium enrichment must be weaponized, despite the lack of evidence for such a thing. That Obama is admitting that the Iranian program may be peaceful and also that Iran may be able satisfactorily to demonstrate that it is peaceful is an extremely positive sign. Obama also slammed without naming them the Congressmen who wanted to slap further sanctions on Iran, risking derailing the talks.

Obama’s assertion that “President Hollande and I agree on the need to continue enforcing existing sanctions” must be read as a rebuke, since in fact 100 French firms went to Iran last week, and Washington was disturbed by their alacrity.

On Syria, Obama said, “we’ll continue to strengthen the moderate opposition, and we call on the international community to stem the flow of foreign fighters into Syria.”

Alas, I don’t think these steps amount to anything practical. There are a lot of porous borders in Syria and stemming the flow of foreign fighters is not practical– nor are the foreign fighters the only problem in Syria. “Calling on” Syria to do things is likewise just a waste of breath.

Why don’t I take a stab first at the Syria question? We still have a horrendous situation on the ground in Syria. I don’t think anybody disputes that. And what is absolutely clear is that, with each passing day, more people inside of Syria are suffering. The state of Syria itself is crumbling. That is bad for Syria. It is bad for the region. It is bad for global national security, because what we know is, is that there are extremists who have moved into the vacuum in certain portions of Syria in a way that could threaten us over the long term.

Again, there is nothing practical here.

Obama also mentions John Kerry’s quixotic Israeli-Palestinian talks and the likely role the European Union will play as time goes on. But the Israelis keep attacking Kerry as “messianic” and unreasonable in seeking a Palestinian state in the West Bank & Gaza. Meanwhile, Israel continues to send squatters in to try to annex the Palestinian West Bank. Obama and Kerry are noble for trying, but a positive breakthrough here would be the surprise of the century.

The third is cooperation in clean energy and reducing carbon emissions. Obama, of course, needs to find some way to step up on this issue, since what the Federal government is doing now is wholly inadequate.

The fourth is essentially charity for Africans. (Hollande had praised Obama’s help with the French interventions in Mali and Central African Republic).

Ironically, the joint appearance underlined that Obama’s main hope a foreign policy success is probably the Iran talks. Syria seems forlorn and his frustration with it was palpable.