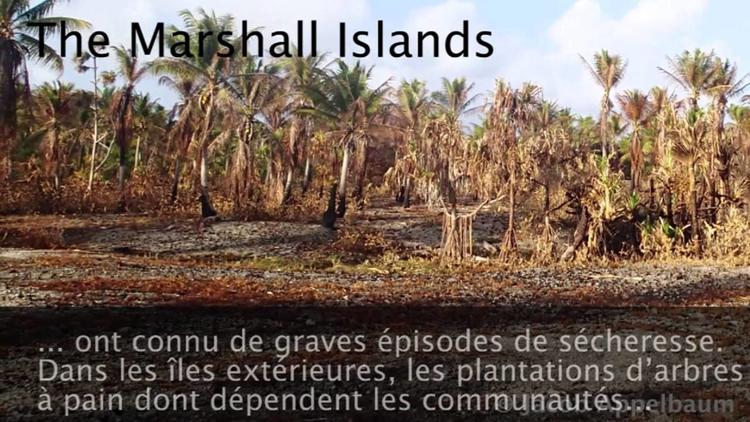 Climate change has not hit a "speed bump." The planet's temperature is not remaining steady and it certainly isn't cooling. Earth, especially its ocean, are heating up… and rapidly.

Those are the findings and the consensus of the global scientific community. And a new study shows that the detectable slowdown of global surface temperature increases over the last fifteen years—a trend that climate change denialists have seized on to foment doubt among the general public—is, in fact, the result of a terrifying phenomenon in which the planet's deep oceans are increasingly absorbing the world's excess carbon, offering a false sense of temperature stability when the reality is very much the opposite.

The new study, conducted by U.S. and Australian scientists and presented in the journal Nature Climate Change, shows that unusually powerful trade winds in the Pacific Ocean have contributed to pushing the warmer ocean waters to greater depths, creating an illusion of a warming plateau on the surface.

As the Guardian reports:

The findings should provide fresh certainty about the reasons behind the warming hiatus, which has been claimed by critics of mainstream climate science as evidence that the models are flawed and predictions of rising temperatures have been exaggerated.

The UN's Intergovernmental Panel on Climate Change (IPCC) addressed the warming pause issue in its 2013 climate report, pointing out that the Earth is going through a solar minimum and that more than 90% of the world's extra heat is being soaked up by the oceans, rather than lingering on the surface.

According to the study, acceleration of Pacific trade winds has been twice as strong in the past 20 years compared with the prior 80 years and suggests the surface warming "hiatus" could "persist for much of the present decade if the trade wind trends continue." However, warn the scientists, when the winds return to their long-term average speeds, rapid surface temperature warming will resume and the consequences could be dire.

"Sooner or later the impact of greenhouse gases will overwhelm the effect," said Matthew England, a climate scientist at the University of New South Wales in Sydney and head researcher on the project. "And if the winds relax, the heat will come out quickly. As we go through the 21st century, we are less and less likely to have a cooler decade. Greenhouse gases will certainly win out in the end."

Putting the idea of the "speed bump" or "pause" in perspective, climate expert Dana Nuccitelli explains how it has acted as a vague and helpful "myth" to those with a vested interest in not addressing the perils of climate change. He writes:

The same problem applies to the 'pause' (or 'hiatus' or better yet, 'speed bump') assertion. It's true that the warming of average global surface temperatures has slowed over the past 15 years, but what does that mean? One key piece of information that's usually omitted when discussing this subject is that the overall warming of the entire climate system has continued rapidly over the past 15 years, even faster than the 15 years before that. 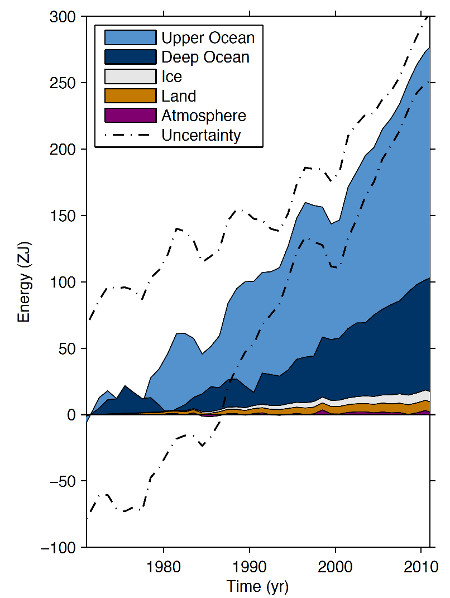 The speed bump only applies to surface temperatures, which only represent about 2 percent of the overall warming of the global climate. Can you make out the tiny purple segment at the bottom of the above figure? That's the only part of the climate for which the warming has 'paused'. As the IPCC figure indicates, over 90 percent of global warming goes into heating the oceans, and it continues at a rapid pace, equivalent to 4 Hiroshima atomic bomb detonations per second.

The Impact of Climate Change in the South Pacific