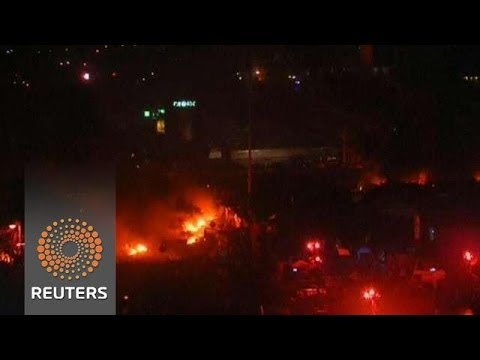 The troubles that Ukraine is having (and that Russia and the former Yugoslavia also had) in its post-Soviet politics, with a struggle between authoritarianism and democracy and between a Moscow orientation versus a Brussels one, are very similar to the difficulties that have beset many countries of the Arab world in the past few years.

It is striking to me that we typically don’t speak of these difficulties as those of “Slavs” or of the “Slavic world.” In English we now tend to speak of eastern Europe, using a geographical term. Russians, Ukrainians and Serbs, Bosnians and Croats, all speak “Slavic” languages and in past decades it was in fact not uncommon to speak of them as Slavs. (This is still done in the Russian press to some extent). Robert Vitalis at the University of Pennsylvania argues that racial categories were key, not incidental, to most political science analysis in the US in the first half of the twentieth century.

But nowadays most journalism on eastern Europe is more sophisticated than that. This Euronews article analyzes Ukraine’s divisions as generational and regional. Thus, youth under 30 overwhelmingly favor joining the European Union whereas their elders who can still remember the Soviet Union often still look toward Moscow. Those in the west of the country favor Europe, those in the east favor Russia.

Some journalists take a third tack, looking at the economy. This IBT piece identifies key problems in the Ukrainian economy — including low foreign direct investment rates, high unemployment, especially for college graduates, a bloated service sector, dependence on imported fuel, etc. (Since Ukraine gets its natural gas from Russia, that gives Putin leverage over Kyiv.)

Another tendency in the Western press is to foreground religious identity and to imagine that people in the Middle East are acting out of “age-old hatreds.” Whenever we historians have looked into supposed age-old hatreds, we have found that most often people have gotten along fine for decades. Economic struggles are more important than sectarian ones in Syria, but they overlap in ways that makes it easy to mistake religious markers of identity as the important ones when it is social class that is at issue.

Imagining that Egypt’s problems go back to its Mamluk sultans or to Islamic Caliphs is not very useful. Seeing the ways in which its problems are common to a post-Soviet world economy is much more salient.

Ukraine’s economy sounds to me a very great deal like Egypt’s. Both have a socialist background, though Egypt’s state probably only ever absorbed about half the economy, whereas in Ukraine the state was probably 95% in the Soviet period. Still, both of them have struggled toward a greater marketization of the economy, with all the inequities that process entails. Both have high unemployment, especially for college-educated youth. Both depend on foreign hydrocarbon states (Russia for Ukraine, Saudi Arabia and the UAE for Egypt), and those rentier patrons in both cases are pushing authoritarian policies because they are threatened by democracy and don’t want it breaking out nearby lest it spread to them.

One big difference is that the Ukraine is in demographic decline, with few young people coming up and a danger of rapid greying. Egypt since its revolution has gone back to very large birth rates.

Western analyses of the Middle East often racializes the analysis (implicitly asking ‘what is wrong with those Arabs?’) But few would nowadays ask ‘what is wrong with those Slavs?’ Racializing is always essentialist and always wrong. While there are differences of culture and history among peoples that cause them to play different language games, these differences have nothing to do with biological traits or kinship.

Good social analysis does look at generational differences, at geographical ones, at economic problems. These analytical tools are non-essentialist, since the considerations involved change over time and allow for people with a language in common still to differ from one another in other respects. This analysis avoids the fallacy of national character.

I’m not arguing that it is necessary to stop speaking of Arabs or the Arab world. The latter has an institutional framework in the Arab League, which groups 21 mostly Arabic-speaking countries plus, for some strange reason, Somalia. But to generalize about “Arabs,” as is still common in the Western press, is to racialize a linguistic category. Moroccans and Kuwaitis don’t actually have much in common except their use of Arabic. Their spoken dialects are barely mutually comprehensible. Kuwait is a small highly urban and literate prosperous city-state of 3.2 million people (a little more populous than Lithuania). Morocco is a still largely rural society of 32 million with a still-high rate of illiteracy, a little less populous than Poland. Their social structures, economies and ecologies are completely different. They aren’t the same “race.”

There anyway are no “races” in the Romantic 19th century sense of a relatively unmixed kinship group with a set of shared character traits and long residence on a particular territory. In fact, all human groups are very extensively intermixed with others, and groups have moved around a great deal.

Interestingly, both Ukrainian and Egyptian demonstrators speak of going to the public square, using the same word, “maidan.” Why is Kyiv’s square called a ‘maidan’? Likely because the city was part of the realm of the Mongol Golden Horde, which under Uzbeg (Oz-Beg) in the 1300s adopted Islam, bringing some Arabic and Persian words in. The world is smaller than it seems.