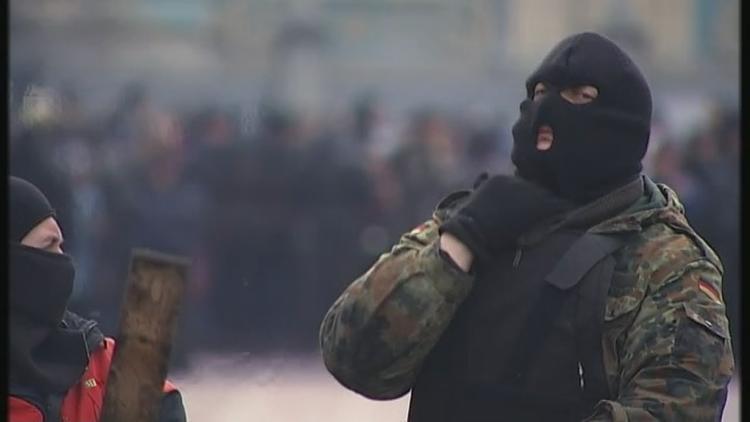 The Russian-speaking population of the Crimean Peninsula in the Ukraine is upset by the popular movement in the west of the country that has overthrown president Viktor Yanukovych and is said to be forming militias. On some government buildings, Ukrainian flags have been replaced by Russian ones. Sevastopol is an important Black Sea port of call for Russian naval vessels, and Moscow has a base there.

Of all the ways in which Russian President Vladimir Putin will see the revolution in the Ukraine as dangerous to Russian interests, the potential loss of Crimea as a Russian ‘near abroad’ is among the more serious. Crimea was given to the Soviet Socialist Republic of Ukraine by Nikita Krushchev (himself Ukrainian) in the 1950s, but more Russians think they have a claim on Crimea than think they have a claim on Chechnya.

US national security adviser Susan Rice has already warned Russia against sending troops into the Ukraine. But what about the sailors at the base in Crimea? They’re already there.

From about 1050 Crimea came under Turkic rule, later Mongol, and later Turkic again. From 1441 until the late 1700s it was a Muslim Khanate that became an Ottoman vassal state. In the late 1700s it was annexed by the Tsarist Russian Empire. By 1900 Crimean Tatars, previously the major population, had been reduced to half of residents. After the Soviet revolution they were reduced to a quarter. Then Stalin forcibly deported many of them to Central Asia. So Crimea was over the two centuries after its incorporation into the Russian Empire largely russified and its indigenous Muslim population swamped or displaced. Hundreds of thousands of Muslim Tatars remained or have returned, but they are still a minority.

What Crimea is best remembered for in the West is the Crimean War of the 1850s. Is there a parallel to today’s tensions? The conflict was initially between the Ottoman Empire and the Russian Empire. In some ways some roots of the conflict lay in Ottoman Jerusalem in the 1840s and early 1850s, where Russia perceived that its claim on dominance of the holy places there through its Eastern Orthodox clients were being set aside by the Sultan in favor of those of the French and their Roman Catholic clients. Russia also coveted the Balkans and Istanbul (the Byzantium of the Eastern Roman Empire). When a conflict broke out between the princes of the Principalities (now Romania), who were nominally Ottoman vassals, and the sultan, the Russian backed the princes and sent in troops. Then it seemed Russia might fight all the way down to Istanbul and take it.

Britain and France did not want the Russian Empire to take over the Middle East, as it might have done if Istanbul fell to the Tsar. Britain reached India from the Mediterranean through Egypt and the Red Sea or through Syria-Iraq and the Persian Gulf. London did not want St. Petersburg to have the ability to cut it off from its rich Indian possessions. Likewise the French had clients in Lebanon and were a major power in the Mediterranean, and did not want Russia supplanting it.

Instead of trying to fight on land in the distant Balkans, the British and French proposed to the Ottomans a joint expedition across the Black Sea to the Crimean Peninsula.

At the time there was no railroad linking the Crimea to St. Petersburg, and the Tsar could not easily get troops down there at short notice. In essence the Franco-British and Ottoman forces took Crimea hostage to forestall further Russian advances in the Balkans. Although the British Empire got the poem “Charge of the Light Brigades” out of the war, actually it was predominantly and Ottoman and French campaign– the British forces supplied were smaller.

‘Forward, the Light Brigade!’
Was there a man dismay’d?
Not tho’ the soldiers knew
Some one had blunder’d:
Theirs not to make reply,
Theirs not to reason why,
Theirs but to do and die:
Into the valley of Death
Rode the six hundred.

The Crimea ploy worked. The war came to a halt. The Great Powers signed the Treaty of London of 1856. It was an important document in diplomatic history. It foreshadowed the United Nations Charter in guaranteeing the Ottoman Empire against any further Russian aggression, with France and Britain pledging collective security. It also pledged the Ottomans to make their Christian subjects equal to the Muslim ones, setting the stage for Ottomanism as a national imperial ideal (it didn’t work in the long run).

As in the 1850s, Russia is claiming as its sphere of influence a territory in eastern Europe (Ukraine today, Romania and other Balkan lands in the 1850s).

As in the 1850s, the West has an interest in seeing Russian power blocked from that part of Europe (today because of their desire to incorporate Ukraine into Europe and possibly ultimately NATO; in the 1850s because they wanted the weak Ottomans to control the Middle East and to give them passage rights through it, rather than having to drive a similar bargain with a powerful Russian Empire).

As in the 1850s, one flash point in this geopolitical struggle is Crimea and its Russian naval facilities. Today, the Russian fleet based at Sevastopol plies the Black Sea and goes through the Bosporus Straits to Tartus, Syria’s Mediterranean naval port.

As in the 1850s, the West worries about Russian hegemony in the Middle East, with Syria being today’s flashpoint. Russia supports the Baath government of Bashar al-Assad, whereas the West largely supports the Free Syrian Army (but not the al-Qaeda affiliates among the rebels). Russia also has better relations with Iran than does the West.

The parallels are hardly exact. But the place of a major Black Sea port in contests between Atlantic powers and Russia has remained a stable feature of geopolitics for over a century and a half.

Channel 4 News: “Is Kiev’s revolution the doorway to democracy?”