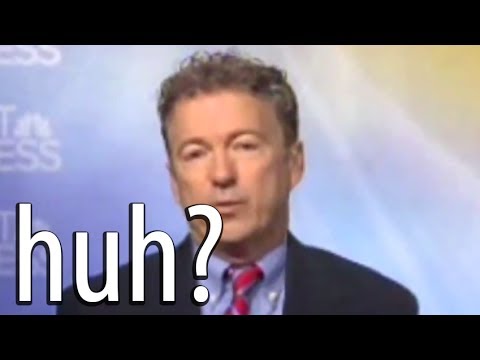 Sen. Rand Paul, in preparation for his run at the presidency in 2016, has been attempting to deflect the GOP disadvantage with women by bringing up the Bill Clinton/ Monica Lewinsky scandal. It is a desperate ploy and, like many of Paul’s initiatives, quirky and a little bit creepy at the same time. Here’s why it won’t work:

1. 59% of American women believe that the GOP ‘doesn’t understand women.’ Trash-talking Bill Clinton as a way of attacking Hillary Clinton is not going to change their mind.

2. The public never cared about that scandal in the first place; Bill Clinton remained popular, and everyone understood he was railroaded by the Republicans in a mean-spirited power play. Nearly 20 years later, no one even remembers it as important.

3. One of the sources of the GOP problem with women is that evangelical rhetoric seeks to deprive them of freedom to do as they please with their bodies. While no one would defend infidelity, Rand’s ploy actually is more of the same.

4. Rand has been calling Bill Clinton a ‘predator,’ implying that Monica Lewinsky was a juvenile. She was 22 and a consenting adult. Trying to turn twenty-something young women back into juveniles is not likely to appeal to them.

5. The majority of women believe that abortion ought to be available (63% of US adults have held this position for decades), and in a bad sign for the GOP, most Americans don’t even think it is a pressing issue. Conservative Republicans keep getting in trouble playing down the problem of pregnancy through rape (affecting 17,000 women a year) because that is a chink in their absolutist anti-abortion armor. Rand Paul believes life begins with conception and wants to ban abortion. He can’t distract them from his attempt to have the Federal government control what happens to their bodies in their bedrooms. And he certainly cannot distract them with a puritan morals campaign against oral sex with silver foxes.

6. Many of the women who have a problem with the GOP are not white, and it is more important for them that Rand Paul has trouble defending the 1964 Civil Rights Act because his weird form of Southern states rights libertarianism doesn’t like to see the government regulate businesses– including restaurants that won’t serve African-Americans.

7. Women care about lots of public affairs issues. For instance, more women than men support gay marriage, with Paul’s GOP opposes (it is a majority of both sexes now).

8. Women care about equal pay for equal work, one of President Obama’s big applause lines in this year’s State of the Union Address. Republicans, including Paul, unanimously voted against the Lily Ledbetter Fair Pay Act. Rand Paul himself is philosophically opposed to government remediation of discrimination.

9. More women than men understand that human-driven carbon emissions are causing climate disruption and global warming. Rand Paul openly derides the evidence for climate change (seas have already risen half a foot since 1850 and are going toward 3-4 feet rise in this century, dooming cities like New Orleans and Miami). For Paul to mock a concern of women is more of the same from the GOP and the ‘Lewinsky’ mantra can’t cover up his contempt for them.

10. Hillary Clinton has a ten point lead over Rand Paul in polling about a possible presidential match-up. A lot of that lead consists of women, who are not going to find it attractive that he is attacking her on the basis of her private life, or that it looks like he is blaming her for Bill’s wandering eye.

The Young Turks: “Rand Paul On The War On Women: The Clintons Started It – Huh?”