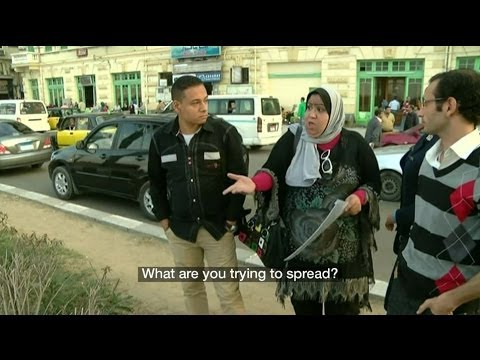 Egyptian journalist Hilmy al-Namnam said last fall that some researchers had concluded that there were 2 million Egyptian atheists. He blamed the rapid increase in unbelief among young people on the period of Muslim Brotherhood rule and the hypocrisy of television preachers. Educated young women are especially dismayed at the discourse on women apparent in clerical sermons. He wrote:

“A number of young people went to the Constitution Drafting Committee and asked to meet with some of its members. These young people called themselves “atheists,” but, unfortunately, none of the committee members met with them, to find out what their ideas were, what were their aspirations and desires with regard to the constitution, which was then being amended. Perhaps time constraints prevented the Commission from meeting these potential interviewees, or perhaps they declined because of the charges of Sheikh Yasser Burhamy that the drafters opposed the Islamic project.

Apparently it was the rule of the Muslim Brotherhood [June 2012-July 2013] that caused these groups of young people to pop up and which increased their numbers. It was suggested that I meet with a number of them last April, and I heard then from a young woman who says that she forsook religion, and when I discussed with them I did not find exactly what you could call a atheism, but a great deal of anger and protest at prevailing actions and behavior, and even many believers will share their anger and protest at the glaring contradiction between words and deeds of some of the preachers on television.”

Sociologist Mansour Moaddel has found that Egyptians wanting to see Islamic law implemented as the law of the land have fallen to 28% from a majority a decade ago, and half of Egyptians now say they see themselves as Egyptian nationals first and Muslims second.