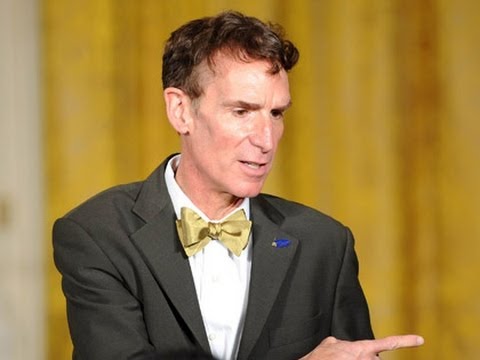 David Gregory’s Meet the Press today hosted a debate between Bill Nye the Science Guy and Texas Rep. Louie Gohmert (R-TX) on whether gravity is just a theory.

“Sure,” Gohmert said, “things fall down all the time. But that doesn’t mean gravity is a law. Look at the Leaning Tower of Pisa. It’s still there after hundreds of years. Things don’t always fall down.”

Nye pointed out that Isaac Newton discovered the law of gravity in the 17th century and it is settled science.

Gohmert challenged Nye’s certainty. “The cultists who tout science always speak as though we know for sure that scientific discoveries are true. Gravity has only been theorized for a couple hundred years. It’s too early to tell. How much money do they want us to waste on suspension bridges and other expensive technology aimed at keeping things from falling down, on the basis of a theory?”

Nye tore off his bow-tie and began chewing on it in frustration.

“Wasn’t it an apple that hit Newton on the head?” Gohmert asked. “Well, I’ve read the Bible and I know that an apple was used to tempt Eve. Maybe the Serpent was just tempting Newton with a secular humanist theory.”

“Besides,” Gohmert went on, “we all saw that movie ‘Gravity.’ Obviously there’s no gravity in outer space. So if the theory doesn’t work everywhere, there must be something wrong with it.”

“The law of gravity says,” Nye replied, “that ‘any two bodies in the universe attract each other with a force that is directly proportional to the product of their masses and inversely proportional to the square of the distance between them.’ Gravity works in deep outer space, it is just that bodies there are distant from the earth. And in ‘Gravity’ they were just falling around the earth, in the grip of its gravity.”

Moderator David Gregory smirked. “That’s a lot of verbiage there, Bill. If you can’t explain something clearly, maybe it’s because there’s something wrong with the theory.”

Gohmert angrily interrupted Gregory. “Besides, we all know that Muslims believe in gravity. That should make you suspicious of it, right there.”

Nye turned to Gregory. “How can you call yourself a journalist? This is a carnival with a bearded lady exhibit!”

Gregory shrugged. “Next you’ll be saying Glenn Greenwald is a journalist. I am not an activist. I don’t know whether gravity is universal. I let both sides tell their story.”

“That’s not a ‘side’! He’s just mouthing nonsense! It doesn’t even make any sense.”

Gohmert pounded the table. “This whole gravity thing is just a way for scientists to get taxpayers’ hard-won money away from them. NASA wouldn’t get all that funding for rocket fuel if people realized that ‘gravity’ is just a theory.”

Gregory turned to the camera and smiled. “There you have it, folks. Next week on ‘Meet the Press:’ A quarter of Americans think the sun goes around the earth. Could they be right? To explain, we’ll be joined by a homeless man who says he is possessed by the spirit of the ancient astronomer Ptolemy.”