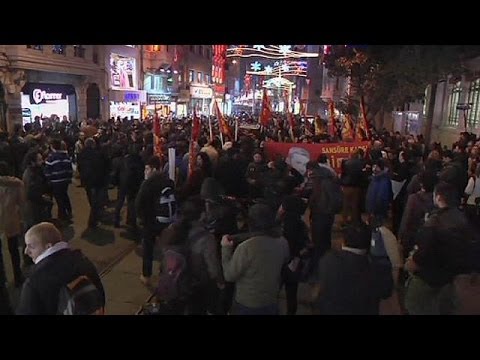 The government’s response to the Gezi protests in June 2013 and its obstruction of a graft probe targeting ministers in December the same year has tarnished the perception of Turkey as an improving democracy. But the foreign media tend to ignore to report the combined seriousness of the developments currently taking place in the country. I will now present 3 laws put forward by the democratically elected AK Party, in order to illustrate how they are stepwise trying to dismantle the Turkish democracy.

Law no. 1 – the end of judicial independence

A law aiming to restructure the Supreme Board of Judges and Prosecuters (HSYK) was passed by the parliament on February 15. The HSYK is the legal organ that appoints prosecutors and judges in Turkey and its structure was aligned with EU standard as a part of the accession process to the European Union in 2010.

The new law, once enacted, will dismiss the entire staff of the board and allow the justice minister to directly appoint its new members. It will thus be the end of judicial independence in the Turkey.

Law no. 2 – the last blow to critical debate

Another law passed by the parliament on February 5 will give the Telecommunications Directorate (TIB), a government controlled agency, the power to close down or block any website without a court order. On top of that the law will also enable the agency to store personal data for up to two years, thus raising fears that critical voices on the Internet will be silenced.

The law comes in handy for the government, since incriminating sound recordings of Erdogan and his family has leaked to the Internet. Considering that Turkey already ranks on place 154 of 180 countries in terms of press freedom according to Reporters Without Borders annual list of 2014, this law might as well be the last blow to critical debate in the country.

Last but not least, just to illustrate the ruthless pragmatism practiced by the AK Party in order to stay in power and avoid any criticism, a law making it illegal to give emergency care to an injured person without approval from the health ministry has already been enacted.

This law was tailored as a direct response to the Gezi protests, where many medical students and doctors helped protesters injured by the police brutality. Any one that performs unattained emergency care now risks up to three years in prison. The fact that this law contradicts the very essence of the Hippocratic oath, sworn by doctors all around the world, unfortunately did not stop it from being approved by president Abdullah Gül.

All three laws above have meet strong critique from both domestic and international organizations. The government, however, defend them with blatant lies, such as that the Internet law will result in a freer Internet, claiming that the critics does not understand what it means. In meetings with the European Parliament, Prime Minister Tayyip Erdogan also said that the restructuring of the judiciary also would not harm the judicial independence in Turkey.

This way of responding to critical questions has lately been more a rule than an exception when the government defends its actions. It is an opportunistic strategy that tries to exploit uncertainty of foreign observers and lack of education among many of the domestic voters. According to the AK Party, less democracy actually means a more democratic Turkey. Does it sound familiar?

If laws number 1 and 2 above are not vetoed by president Abdullah Gül, Turkey is unfortunately taking a big leap towards one-party-rule.

Ola Claësson
Ola has lived in Turkey and is blogging about the country at www.whatsupturkey.com. He is currently writing a book about Turkey.