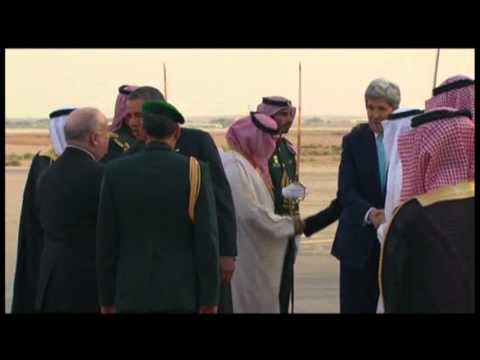 President Barack Obama met late Friday with King Abdullah b. Abd al-Aziz of Saudi Arabia at the latter’s desert camp, flying out from Riyadh by helicopter.

The tensions between Saudi Arabia and the United States have come about in part because Riyadh, after being skittish about George W. Bush’s muscular Neoconservatism in the region, has now swung around and adopted a set of foreign policy stances far closer to those of the Republican Party in the US than to the Obama administration. Given that Saudi Arabia is a deeply conservative, religious state based almost entirely on the petroleum industry, it is no accident that it is a Red State in American political terms.

King Abdullah of Saudi Arabia a decade ago worked against Bush’s refusal to talk to the Iranians, calling that country’s president and foreign minister to Riyadh. But despite an Iranian overture to the Saudis since the election of current President Hassan Rouhani, the king and his closest advisers are against Obama’s attempt to get a deal with Iran that would let Tehran enrich uranium to low levels for nuclear fuel. Like the Israelis, the Saudis want the US to push Iran into closing down its nuclear enrichment program (which Iran maintains is for peaceful civilian energy purposes) altogether. This goal is of course impossible to achieve without an invasion and occupation of Iran by the US, which is not going to happen while Obama is in office.

The Saudis also want the US to allow the supply to Syrian rebels of anti-aircraft and other heavy weaponry. Obama’s decision not to get involved directly in Syria, from a Saudi point of view, has allowed the Baath regime of Bashar al-Assad to recover the momentum in pushing back the rebels.

And, the Saudis want the US to accept the coup d’etat in Egypt against Muslim Brotherhood president Muhammad Morsi, and to support the military government.

Zuhayr al-Harithi of the Foreign Policy Committee of the Saudi Consultative Council that advises the king said that the monarch wanted to impress on Obama the magnitude of the dangers and challenges in the region, which require and adjustment of current US policy.

The Saudis wanted to hear more about the safeguards the US will implement against an Iranian nuclear weapons program, but wanted to pursue aspects of Iran policy beyond the nuclear issue — presumably, Iran’s support for al-Assad in Syria and Hizbullah in Lebanon. The Saudis are supporting Salafi and Sunni rebels against the secular nationalist Baath Party, which has many Alawite Shiites at the top of it. Twelver Shiite Hizbullah policy is opposed by Saad Hariri, the Lebanese Sunni politician who is a client of Saudi Arabia.

Some other Gulf Arab concerns were laid out by Ibtisam Al Ketbi. She is a policy thinker in the UAE but her views on foreign policy overlap with those of Riyadh. She adds a concern about Shiite triumphalism in Iraq to the list of issues, along with a concern for successful negotiations between Israel and the Palestinians for a Palestinian state. (The Palestine issue is the only major one where the Saudi position is the opposite from the GOP one).

Aside from providing a bit more US covert aid to the “moderate” Sunni rebels in Syria, however, it is difficult to see how Obama can actually make King Abdullah happy. The differences in policy cannot easily be bridged. The US doesn’t want the Syrian rebels (who are now dominated by al-Qaeda affiliates) to have heavy weapons. Presumably, however much the Israelis hate Bashar al-Assad, they don’t want al-Qaeda types being able to shoot El Al airliners out of the sky with Manpads.

Obama wants an Iran deal, which would be a game changer for US foreign policy in the region, and believes that safeguards can indeed be put in place preventing Iran from putting its low-level enrichment of uranium to bomb-building purposes.

Obama has done what he can to hold the Egyptian military harmless from its coup against Morsi, but the left wing of the Democratic Party is not happy about continuing US aid as normal, given military rule. Perhaps if Egypt moves quickly to fairly transparent elections, the Washington-Cairo relationship can begin to be repaired. But the Obama administration doesn’t think persecuting, shooting down and executing Muslim Brothers is wise and fears it will lead to radicalization.

The Israel-Palestine negotiations look likely to fail by the end of April, quite decisively, and Riyadh is not going to be happy about it. From a Saudi point of view, such a failure would show that Obama proved unwilling to pressure Israeli PM Binyamin Netanyahu sufficiently.

Obama has a tendency to believe that personal contact can paper over policy differences. One remembers the painful meeting he staged over Obamacare with Republican senators, hoping he could find some compromise, only to be universally rejected and scolded. Likewise, his spokesman talked of the importance of looking King Abdullah in the eye.

But Obama is not a hawk on Iran, is convinced a US intervention in Syria would lead to a quagmire, isn’t happy with the Egyptian military, and can hardly be expected actually to intervene effectively in Iraq or the Israel-Palestine issue, which are based on ground truths that the US cannot alter from 30,000 feet.

So, US-Saudi tensions will continue.

Nor is it clear that King Abdullah’s new Neoconservatism is wise. A deal with Iran will benefit Saudi Arabia in reducing Gulf tensions. Riyadh’s fixation with overthrowing the Syrian government has helped cause a civil war that could well blow back on Saudi Arabia.

No drama Obama may be exactly what the Middle East needs, not a Wahhabi Saudi Arabia on steroids.