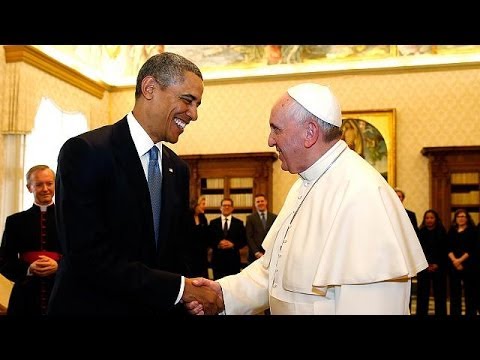 Could enormous popularity of Pope Francis spill over into American politics? Pope Francis is worried about inequality, a Democratic Party issue, and his statements and actions on the subject are a stunning rebuke to “evangelical Catholics” such as Paul Ryan, who tend rather to celebrate economic inequality or to deny it or to blame the victims. On the other hand, Francis is worried about Obamacare forcing Catholic institutions to pay for birth control for their employees, against their will.

The real reason Joe Biden is vice president is that the Democratic Party has a White Catholic problem. Irish-Americans, Polish-Americans and Italian-Americans give the edge to Republican presidential candidates over Democratic ones by anywhere from 5 to 19 points. The two extremes both occurred in the case of Obama, who received 47% of the White Catholic vote versus John McCain’s 52 percent in 2008, and who received only 40% of their vote in 2012 versus 59% for Mitt Romney. Biden was able to turn things around in that constituency in 2008, but not so much in 2012.

President Obama had attempted to position his meeting at the Vatican as an “inquality” summit. Pope Francis, in contrast, structured the publicity around President Obama’s meeting with him so as to concentrate on abortion and birth control. Obamacare mandates that employers pay for insurance that includes giving birth control to employees. Pope Francis opposes this affront to Catholic conscience. He appears to be attempting to make a trade– his support on inequality issues in return for Obama backing off pressure on Catholic hospitals (e.g.) to pay for coverage of contraceptives for employees.

The thing is, however, American Catholics have largely rejected the Vatican’s stance on birth control. Nearly 80% of US Catholics support the use of contraceptives and so have no problem with Obamacare mandating the employer-paid insurance provide it. Indeed, the worldwide Catholic lay community rejects the ban on contraceptives and supports abortion rights by a fair margin.

So actually Pope Francis is in a weak position to pressure Obama on this issue. Since it is a matter of some concern to women, and since Democrats in presidential elections have a 10-point advantage among women voters, it would be foolish for Obama to alienate the latter in a bid to make the Catholic hierarchy happy when the Catholic faithful doesn’t care.

But the more significant issue is the one on which Obama and the pope agree, that is, the undesirability of extreme wealth inequality. Late last fall Pope Francis wrote in an apostolic exhortation entitled “The Joy of the Gospel” (Evangelii Gaudium):

“Just as the commandment “Thou shalt not kill” sets a clear limit in order to safeguard the value of human life, today we also have to say “thou shalt not” to an economy of exclusion and inequality. Such an economy kills. How can it be that it is not a news item when an elderly homeless person dies of exposure, but it is news when the stock market loses two points? This is a case of exclusion. Can we continue to stand by when food is thrown away while people are starving? This is a case of inequality. Today everything comes under the laws of competition and the survival of the fittest, where the powerful feed upon the powerless. As a consequence, masses of people find themselves excluded and marginalized: without work, without possibilities, without any means of escape.

Human beings are themselves considered consumer goods to be used and then discarded. We have created a “throw away” culture which is now spreading. It is no longer simply about exploitation and oppression, but something new. Exclusion ultimately has to do with what it means to be a part of the society in which we live; those excluded are no longer society’s underside or its fringes or its disenfranchised – they are no longer even a part of it. The excluded are not the “exploited” but the outcast, the “leftovers”.

In this context, some people continue to defend trickle-down theories which assume that economic growth, encouraged by a free market, will inevitably succeed in bringing about greater justice and inclusiveness in the world. This opinion, which has never been confirmed by the facts, expresses a crude and naïve trust in the goodness of those wielding economic power and in the sacralized workings of the prevailing economic system. Meanwhile, the excluded are still waiting. To sustain a lifestyle which excludes others, or to sustain enthusiasm for that selfish ideal, a globalization of indifference has developed. Almost without being aware of it, we end up being incapable of feeling compassion at the outcry of the poor, weeping for other people’s pain, and feeling a need to help them, as though all this were someone else’s responsibility and not our own. The culture of prosperity deadens us; we are thrilled if the market offers us something new to purchase. In the meantime all those lives stunted for lack of opportunity seem a mere spectacle; they fail to move us.”

Ouch! That is just about the most thorough debunking of the Republican Party platform you could imagine.

And, it is a message popular with Roman Catholics. Some 78% of American Catholics believe that the US government should do “a lot” (almost half say that) or at least “something” to reduce poverty and inequality.

The statement started some rabbits in the cafeteria Catholic brush, so that Paul Ryan felt constrained to bash the Pope for allegedly not understanding capitalism. Does Ryan really think he can run on that position in Boston?

So the likelihood is that Obama and the Democrats in general can benefit from the Pope’s forthright stance on these issues, which makes Paul Ryan and other GOP Catholic Scrooges look like cafeteria Catholics. Obama and Francis are on the same page as the US Catholic faithful on this issue, which gives it political salience.