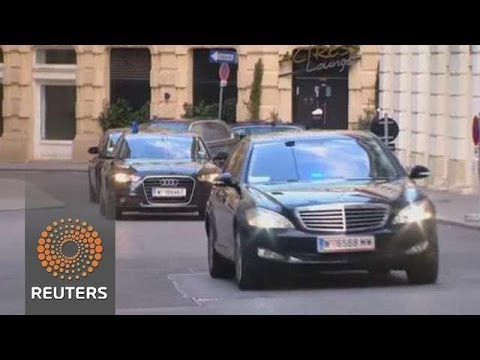 Iran may have gotten a New Year’s gift via the Crimea crisis, as Russia threatens to play the Iran card over proposed US sanctions. As I argued in the New York Times, Russia and Iran are being driven closer to one another as both are now under a US and Western European sanctions regime. Russia had earlier wanted to avoid unnecessarily angering Washington over Iran, but is signalling that it no longer cares what the US thinks on this issue.

The vernal equinox this year falls on March 20, and it is celebrated in Iran and some surrounding cultures as New Year (Now Ruz). Ancient Iranian legend says that New Year celebrations were switched from the fall to the first day of spring by the mythical king Jamshid, who also established the elements of a flourishing civilization in ancient Iran. (I retell this story in my sword and sorcery novel, “Fall of the New Year Throne”).

Among the rituals of the Persian New Year are house cleaning, buying a new suit of clothes, and making a household display of seven items that begin with the letter “s.”

Iran’s house cleaning this year is its negotiations with the five members of the UN Security Council plus Germany (P5 + 1) over its nuclear enrichment program, in an effort to reassure the world that it is purely for civilian purposes and does not aim at producing a nuclear weapon.

On Wednesday, the day before Now Ruz, another round of negotiations was concluded in Vienna, with some optimism that progress is being made. Among the specifics discussed were Iran’s plans for a heavy water nuclear reactor at Arak. Heavy water reactors produce plutonium, which can be used for bomb-making. I would say the reactor has to be a light water facility, but apparently there may be a compromise whereby the heavy water reactor could be kept by Iran but with some sort of safeguard. The delegates also discussed Iran’s specific needs with regard to enriched fuel for its 3 nuclear reactors at Bushehr.

As the meeting was breaking up with a sense of accomplishment, however, Russian Deputy Foreign Minister Sergei Ryabkov unloaded a bombshell: Russia may cease complying with economic and financial sanctions on Iran over its nuclear enrichment program.

“”We wouldn’t like to use these talks as an element of the game of raising the stakes taking into account the sentiments in some European capitals, Brussels and Washington… But if they force us into that, we will take retaliatory measures here as well. The historic importance of what happened in the last weeks and days regarding the restoration of historical justice and reunification of Crimea with Russia is incomparable to what we are dealing with in the Iranian issue.”

A lessening of Russian economic pressure on Iran at this juncture would weaken the Western hand in the negotiations and strengthen Iranian hard liners opposed to the talks and to any concessions to the West over Iran’s enrichment program. Iran maintains that it has a right to enrich and to close the fuel cycle under the terms of the Nuclear Non-Proliferation Treaty. The treaty does make those guarantees, but the US manages to interpret it so as no to afford them to Iran, and Washington has gotten the UN Security Council to go along with it on this matter. A Russian defection from that consensus would be a game changer, especially since China already rejects unilateral US sanctions on Iran.

So as the house cleaning is proceeding, Iran may have just gotten a new suit of clothes from Ryabkov.