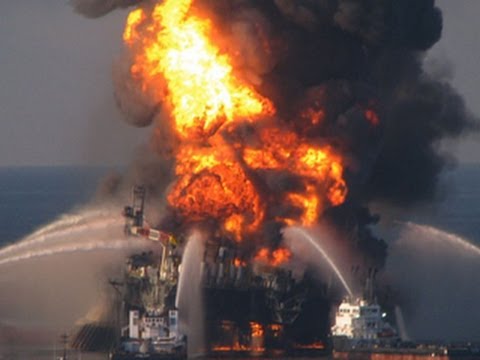 Four years after the Deepwater Horizon explosion, oil still washes up on the Gulf Coast shore, and residents and cleanup workers face health hazards from the millions of gallons that spilled and British Petroleum's chemical dispersant that followed. Yet, the Environmental Protection Agency announced Thursday that BP — after pleading guilty to 11 charges of manslaughter and lying to Congress about the disaster — will be allowed to start new drilling in Gulf waters.

"BP has ruined coastal areas in five states and killed 11 people," said Monique Harden of the New Orleans-based Advocates for Environmental Human Rights in an interview with Common Dreams. "This has nothing to do with justice or people or sustainability of our environment. It is all about political deal-making."

In a 5-year agreement, the EPA removed BP's ban on U.S. contracts and new leases, including in the Gulf of Mexico. Imposed in 2012, the prohibition was put in place after the EPA determined that BP had not fully addressed the problems that led to the 2010 disaster that killed 11 workers and led to the worst off-shore oil spill in U.S. history. In response, BP turned around and sued the EPA on charges it was being unfairly punished, and with the backing of the British government and U.S. Chamber of Commerce, won the settlement announced Thursday.

However, the ban on new leases did not affect existing ones, and throughout the prohibition, BP held "more oil leases in the Gulf than any other driller," ThinkProgress reports.

The deal was announced just in time for the oil giant to participate in next week's scheduled Interior Department lease sale of 40 million acres in the Gulf waters.

BP has been given the go-ahead for new drilling while coastal communities still contend with the toxic legacy of the company's 2010 spill.

"It is no longer prime-time news anymore, but the fact remains that people face health problems from being exposed to toxic oil and the chemical dispersant used on the oil," said Harden. "People are experiencing a number of serious health problems. There are very few options for medical treatment in the healthcare system. The Gulf is still suffering from damage done by BP."

"It's been almost four years since the disaster, and BP oil is still affecting people and wildlife in the Gulf," said Raleigh Hoke of the Gulf Restoration Network in an interview with Common Dreams. "Regulators have not yet enacted many safety measures recommended by investigators."

While BP reached a settlement in 2012 to compensate those hurt by the spill, the corporation has launched an aggressive legal, lobbying, and advertising campaign to avoid paying claims to individuals and businesses. Furthermore, BP is still entangled with the federal government in a court battle over fines from the corporation's violation of the Clean Water Act. The settlement comes despite BP's guilty plea to 11 counts of felony manslaughter, as well as pollution violations and lying to Congress to cover up the spill.

The EPA claimed in a statement released Thursday that, as part of the settlement, BP will be "required to retain an independent auditor approved by EPA who will conduct an annual review and report on BP’s compliance with the agreement. There are also specific provisions addressing ethics compliance, corporate governance, and process safety." EPA officials say the agreement allows them to take "corrective action" in the event of a breach.

Yet Harden says the deal is simply "allowing the company to conduct business as usual." She charged, "It's a messed up world we live in. People are thrown in prison for felonies, and then we have BP who is able to get right back in the game after a manslaughter charge."

Tyson Slocum of watchdog group Public Citizen told Common Dreams that the green-light for drilling is especially alarming, given the company's track record. "At the time of the Deepwater Horizon incident, BP was on criminal probation for two previous crimes: the 2006 Alaskan pipeline oil spill, for which they pleaded guilty to felonies, and the Texas City refinery explosion in 2005," he said.

The agreement stipulates that BP must exhibit "truthfulness in reporting and conveying information to the EPA and other regulatory agencies."

Yet Harden dismissed the provision as a "pathetic remedy."

"BP has ultimately said we promise we are not going to lie anymore — we cross our fingers," she said. "Well, the problem is bigger than BP not telling the truth. The problem is the physical damage of the Gulf region, the loss of lives, and the potential loss of life for residents who were exposed."

CBS This Morning: ” BP allowed to secure contracts in the Gulf of Mexico ”