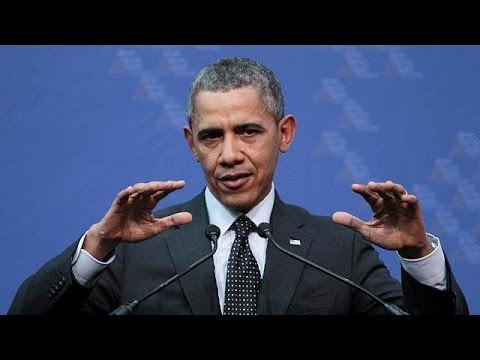 The peculiar American two-party system followed President Obama to the Hague on Tuesday, where he gave a joint press conference with the Dutch Prime Minister Mark Rutte, leader of a Neoliberal, market-oriented party with a secular orientation.

Obama was asked about the Ukraine, and replied from across the Atlantic to Mitt Romney’s “Face the Nation” critique, in which Romney posed as prescient about the dangers of Russia as America’s chief geopolitical adversary and slammed Obama as naive about Moscow.

“With respect to Mr. Romney’s assertion that Russia is our number-one geopolitical foe, the truth of the matter is that America has got a whole lot of challenges. Russia is a regional power that is threatening some of its immediate neighbors not out of strength, but out of weakness. Ukraine has been a country in which Russia had enormous influence for decades, since the breakup of the Soviet Union. And we have considerable influence on our neighbors. We generally don’t need to invade them in order to have a strong, cooperative relationship with them. The fact that Russia felt compelled to go in militarily and lay bare these violations of international law indicates less influence, not more.

So Obama denied the premises of Romney’s perspective. Russia, he said, is a narrow Eastern European issue, not a globe-straddling one.

In this regard Obama is certainly correct. Romney and other hawks appear to want to resurrect the Cold War. But that was a truly global struggle in which two ideologies, capitalism and socialism, competed for every country in the entire world. The US cared about politics in places like Senegal and Laos during the Cold War because it was competing with Soviet socialism as a way of organizing society in those places. The Soviet Union even had civil society allies like the Communist Party in Western countries such as France.

That kind of geopolitical competition no longer exists. Russia is just another capitalist country, but its reach into global markets is limited because it mainly has hydrocarbons to offer them, not so many factory-made goods. In some ways, Russia is a bit like Saudi Arabia, an oil and gas rentier state. The US is not competing for Senegal with Vladimir Putin. Nor for Laos. There is no organized support for Russia’s annexation of Crimea in France. As Obama says, the flashpoints in US-Russian relations are small and regional, as with Ukraine (one could also mention a certain rivalry in Uzbekistan in Central Asia).

Obama was thinking of the summit on nuclear disarmament he was attending before the G7 meeting when he continued:

“And so my response to them continues to be what I believe today, which is Russia’s actions are a problem. They don’t pose the number-one national security threat to the United States. I continue to be much more concerned when it comes to our security with the prospect of a nuclear weapon going off in Manhattan, which is part of the reason why the United States, showing its continued international leadership, has organized a forum over the last several years that’s been able to help eliminate that threat in a consistent way.”

So these remarks were not really aimed at Russia, Ukraine or the Netherlands. They were replies to the Republican Party, the role of which when it is in opposition is to gossip against and tear down the president from the other party. Obama was rejecting charges that he is weak and that Russia is challenging the US on a global level. He was saying that Russia is the one that is weak, since if it was strong it wouldn’t have needed to stage a hasty referendumn in and invasion of Crimea.

Obama seemed to recognize that Russia would not give back up Crimea, but emphasized that sanctions would be applied to punish Moscow for the annexation– even if they hurt Western economies somewhat as well.

But, he said, his goal was to dissuade Russia from taking districts from Eastern Ukraine or from sending its troops into its neighbor.

Obama, pressed by a reporter as to whether the US does not look weak in the current geopolitical moment, replied that all along the US had more than one sort of sanction available, and had declined to intervene in lots of crises in the 20th century.