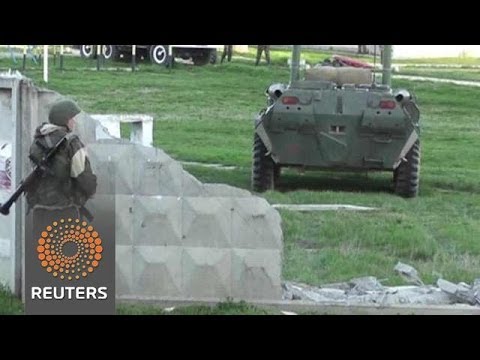 On Face the Nation on Sunday, Mitt Romney slammed President Obama’s policies toward Russia as “naive” and called the country a “geopolitical adversary” of the US. He also seemed to suggest that Obama’s Syria policy emboldened Russia. He said:

“”Well, there’s no question but that the president’s naivete with regards to Russia, and his faulty judgment about Russia’s intentions and objectives, has led to a number of foreign policy challenges that we face. And unfortunately, not having anticipated Russia’s intentions, the president wasn’t able to shape the kinds of events that may have been able to prevent the kinds of circumstances that you’re seeing in the Ukraine, as well as the things that you’re seeing in Syria,” Romney said. “We really need to understand that Russia has very different interests than ours. This is not fantasyland, this is reality where they are a geopolitical adversary. They’re not our enemy, but they are certainly an adversary on the world stage.”

The interview is here:

Russia’s actions in Crimea do not make it the chief geopolitical adversary to the US. Crimea was never a US sphere of influence.

If Romney meant to imply that Obama’s Syria policy emboldened Russian President Vladimir Putin to annex Crimea, that is frankly absurd. Rep. Dick Durbin (D-IL) pointed out that in the wake of the US invasions of Afghanistan and Iraq, Putin nevertheless sent troops into South Ossetia and peacekeepers into Abkhazia, recognizing them both as independent of Georgia. He also bombarded Georgia. These events unfolded in March-October of 2008, when George W. Bush was president. It is unclear that Bush did anything at all about these events, despite talking a good game. Had Bush encouraged Putin by invading Iraq?

In fact, the Georgia crisis in some ways began with the declaration by Kosovo of independence from Serbia, and this was cited by Putin. Russia opposed Kosovo independence but then later saw it as a precedent for Abkhazia and South Ossetia.

As for Syria, nothing Obama did there would have made any difference to Putin. If Obama had in fact sent some bombs or drones on Damascus over the chemical weapons issue, it would have done nothing to deter either Syria or Russia.

But, if there is a principal villain in Obama’s decision to turn to international allies in defusing the crisis, it is the Republican-held House of Representatives, which clearly was going to vote against US intervention. So it is rich that the GOP standard-bearer should again be attacking a sitting president.

Bush’s non-action during the Georgia crisis is now completely forgotten by the Republicans castigating Obama.

Romney also completely misunderstands Russia’s motives. From Moscow’s point of view, NATO enlargement was a a kind of Western aggression. Romney’s advice that we should enlarge and speed up those developments is guaranteed to produce defeats for the US.