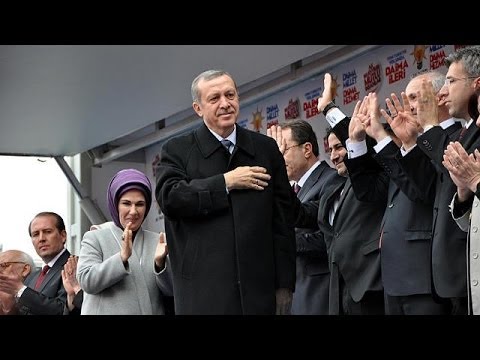 The good news is that Gul stepped in to nix the authoritarian step proposed by Erdogan, which recalls the policies of regional dictators such as Tunisia’s Zine El Abidine Ben Ali and Syria’s Bashar al-Assad (even they had to back away from such bans because of a public backlash).

The bad news is that Gul is outgoing as president and may be replaced by… Tayyip Erdogan.

More bad news: One reason Gul gave for rejecting a global ban is that Turkey now has among the world’s most repressive internet laws and the government can ban websites one by one. So what Gul is saying is not that free speech will be maintained on social media but rather you don’t need to ban the Facebook domain as a whole because the government can ban individual sites within it. That’s very bad.

Why does Erdogan want to get rid of social media? Apparently because he has cowed and intimidated the print press in meatspace and on line into never offering any significant criticism of him or his policies. More evidence of his browbeating of editors and getting reporters fired surfaced in the form of audio tapes of his telephone conversations with newspaper editors this week. Their authenticity cannot be confirmed at this time.

Erdogan maintains that the audio files are pastiches made up of words recorded in various conversations and then patched together to make him look bad. That allegation can surely be easily tested forensically and I hope Turkish activists will prove or disprove it.

The prime minister has been dogged by audio leaks showing him as engaged in corrupt and dictatorial practices, which he maintains have been put out by the movement of Fethullah Gulen, a Muslim revivalist movement that had earlier been Erdogan’s coalition partner but which has split with him. Erdogan charges that Gulen members act as a political cult, secretively inserting themselves into the police, judiciary and other influential offices and then using their clout to undermine him. (In some ways his charges against the Gulen members resemble Saudi Arabia’s recent campaign against the Muslim Brotherhood, which is likewise accused of deploying Stalinist tactics of covert penetration and sabotage).

Whatever the truth about the Gulen movement, that Erdogan has suppressed freedom of the press in Turkey seems obvious. During the Gezi Park demonstrations last summer, Turkish news channels avoided covering the rallies. CNN Turk ran a documentary about penguins at the height of the police crackdown. The print press often runs the same pro-government headline in 7-10 newspapers, showing that these newspapers have become little more than propaganda outlets for Erdogan’s center-right Justice and Development Party (AKP), which tilts toward Muslim issues though it has not, at least until recently, been a fundamentalist party.

It further seems obvious that Erdogan is frustrated that he can’t control the internet the way he controls the press, which is what is impelling him to threaten to close down Facebook and Youtube altogether. Turkey retains the conception of political libel (unlike the US and most European states), such that if you say something damaging about a politician you can be sued and jailed. Since political reality is ambiguous, political libel is an extremely pernicious conception and gives politicians a tool to avoid being criticized (though you could argue that judges in the US have gone too far in the direction of allowing outright and obvious lies to be spread around about political figures). Erdogan is maintaining that he is being libeled not just by individuals but by social media in their entirety.

Although Erdogan had a good run as a steward of the Turkish economy in the past decade, and has real accomplishments to his credit in expanding trade and industry, he has in my view developed severe personality problems– narcissism, vindictiveness, grandiosity– that are harming Turkey and undermining its earlier move toward more democracy. Free communication is key to progress in science, technology, and cybernetics (what software engineers can make real progress in a society without an internet?), and Erdogan’s reinvention of himself as a latter day Ottoman Sultan Abdulhamid II (famed for his censorship and paranoia over a century ago) has become a potential obstacle to further Turkish advancement.

If it is true, as he alleges, that the Gulen movement is acting like a covert political cult, that is also disturbing. But maybe what Turkey needs is the equivalent of RICO (corrupt practices and conspiracies) prosecutions where nefarious activity is proven in court and prosecuted, as with organized crime in the US– not a wholesale ban on Facebook!