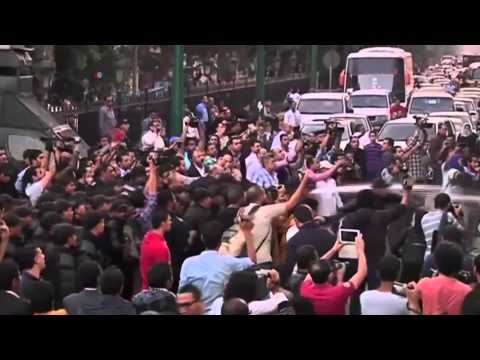 Egypt’s Brig. Gen. Abdel Fattah al-Sisi, 59, on Wednesday resigned his military commission and announced that he will run for president. He was given a long spot on Egyptian television to make the announcement, still wearing his uniform (he said it was the last time he would be seen in it after a career of some 36 years).

Al-Sisi’s announcement was more Jimmy Carter than Ronald Reagan. He was brutally frank about the weakness of the Egyptian economy. He admitted that there is high unemployment among the youth in particular. He admitted that most Egyptians don’t have proper medical care. He lamented that Egypt is dependent on foreign aid from others. He said the country has a terrorism problem. He acknowledged that after the fall of Hosni Mubarak, no one can dream of being president of Egypt without the support of the Egyptian people. I.e., he was promising to run a clean election and abide by the vote tallies (Mubarak used to get 98% of the vote via ballot-stuffing).

Al-Sisi seems to be genuinely popular. In polling, a majority of Egyptians already says that it will vote for him. The downside is that the youth did not come out to vote for his constitution, peeved that he put some of their prominent organizers in jail for protesting. And most youth say they have no intention of voting for president. Al-Sisi’s movement of last summer had been a coalition of youth movements, labor movements, and the army and the civil servants. The youth wing has abandoned him. Public sector labor is also very unhappy and has been striking. The postal workers struck when I was in Egypt a couple of weeks ago. So al-Sisi just has the older established voters who are opposed to Muslim fundamentalism and tired of the disruptions after the 2011 revolution.

The al-Sisi run for president mixes together two motifs. First, it is a sort of Bonapartism, a restoration of the presidency to a military man, which had been the case with Egypt’s four post-1952 presidents. The tradition was briefly interrupted in 2012-2013 when there was a civilian, Muslim Brotherhood president, Muhammad Morsi. The military in turn is a steward of the enormous public sector, both of state business elites and of public sector workers.

Second, al-Sisi represents himself as a conduit for substantial influxes of new money into Egypt. Governments that depend on outside money coming in instead of on in-country taxes are called “rentier states” by political scientists. In 18th century France, a “rentier” was a wealthy person who lived off investments. Most rentier states nowadays get their money from primary commodities such as petroleum and natural gas. Egypt has few hydrocarbon resources. But another way to receive “rent” or external money is to have strategic use for the donor. The $2 billion a year the US gave Egypt after 1978 was strategic rent. Now Saudi Arabia feels insecure about the challenge from Iran, given that the Obama administration seems to be making up with Iran. And it is afraid of the surge of populist Muslim movements that challenge its legitimacy. So having the Egyptian military provide security to the small oil monarchies of the Gulf makes sense both to the emirs and to Egypt. Egypt is being hired as a large security guard.

When I was in Egypt in early March I read an interview with al-Sisi and his circle in al-Shuruq in which he said that Egypt needs $150 billion or so in infrastructure investment. As I read the interview, al-Sisi and his fellow generals believe that they can get that much and more (perhaps $250 billion) from the Gulf oil monarchies of Saudi Arabia, the United Arab Emirates and Kuwait in return for a firm offer of an Egyptian military umbrella protecting those small countries from Iran and from popular movements of political Islam. Soon thereafter Egypt and the UAE conducted their first joint naval exercises in the Gulf.

One theory of why it has taken so long for al-Sisi to declare his candidacy is that he was reluctant to run unless he had a firm promise of these massive sums of Gulf aid. The Arabic press says that he hopes to benefit from a UAE grant of billions for housing construction.

So my interpretation of al-Sisi is that he is running on a platform of bringing in major strategic rent from the Gulf. In essence, he is repeating the strategy of Anwar El Sadat of the early 1970s. Egypt had been dependent on Soviet aid. The Soviets had strictly instructed Abdel Nasser that he could not fire the first shot in any conflict with Israel in 1967, which military men like Sadat minded because it felt like neocolonialism. Sadat replaced Russian aid with Saudi aid and then from 1979 was rewarded for the Camp David Peace Accords with Israel by $2 billion a year from the US.

Just as Sadat initially replaced Russia with Saudi and other Gulf support, so al-Sisi is attempting to replace US aid with Gulf strategic rent. US aid anyway has drawbacks. It is mostly actually aid to US arms manufacturers like Lockheed Martin and Boeing– Egypt gets tanks and helicopters in kind, not cash on the barrel head. Since what Egypt really needs is someone to make factories and invest in the economy, US military aid (the bulk of it) isn’t that useful. After a while you have warehouses of tanks and helicopters. Egypt doesn’t have anyone to go to war with, so how useful are they? Ironically the US rewarded Egypt for a policy of permanent peace by piling up weapons in the country. This is just corporate welfare for US arms corporations.

The other drawback is that the US wanted the Egyptian military to put up with Muslim Brotherhood rule on the grounds that the Brotherhood had been legitimately elected. The Obama administration did not want Morsi overthrown. Many in Washington had hoped that enticing devotees of political Islam into parliamentary politics could result in a decline of radicalism and al-Qaeda, which they thought had been produced in part by exclusion of the fundamentalists from participation in civil politics by the Arab dictatorships. Al-Sisi made the coup against Morsi nevertheless, ignoring Obama.

In contrast, the Gulf monarchies were petrified of the Muslim Brotherhood controlling Egypt. They see the Brotherhood as a set of conspiratorial cells with republican tendencies and so a dire threat to the Gulf monarchies. They wanted the Brotherhood overthrown and proscribed, steps they see as good for their own security. Egypt invaded Arabia in the 1820s and defeated the ancestors of King Abdullah. The Saudis viewed Brotherhood rule as the menace of another such invasion (this time via soft power rather than a military incursion), and they were determined to forestall it.

The historically high price of petroleum for the past few years has allowed Saudi Arabia to amass hundreds of billions of dollars. Saudi has some $750 bn in foreign currency holdings and its sovereign wealth fund is about on that order, as well. Likewise Kuwait’s sovereign wealth fund is $400 bn. and it has $50 bn or so in foreign currency reserves. The UAE sovereign wealth fund is something like $700 bn. So if Saudi Arabia and the others did purpose some of their extra money to more or less buying Egypt’s army, that wouldn’t be a bad deal. It would cost more than that to build up and maintain a Saudi army that is substantially bigger and more professional than the present one. And if at the same time they get a suppression of the Brotherhood it becomes an even better deal for them.

One problem with marginalizing the Brotherhood is that some of them have been driven to violence, which has spooked the tourists. Tourism had been 10 percent of Egypt’s economy but is way off. It remains to be see if that money can be replaced by strategic rent. Al-Sisi’s crackdown on the Brotherhood has led to hundreds of deaths.

Al-Sisi’s opponent, Hamdeen Sabahi, is a Nasserist (socialist anti-imperialist). He got 20% of the vote in the first round of presidential elections in May 2012, and should not be underestimated. He welcomed his rival to the race, but asked that state television give him a similar opportunity to address the country. Sabahi is from Kafr Sheikh in the Delta. In a humiliation for him the workers’ union there immediately came out for al-Sisi.