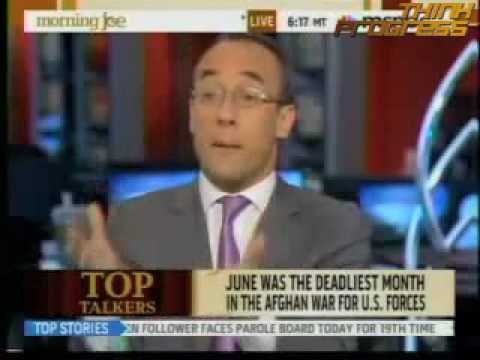 It just baffles me that failed Neocons like Dan Senor are still given a hearing inside the Beltway. ABC News actually interviewed Senor, the spokesman for the Bush administration’s illegal invasion and occupation of Iraq on the Crimea crisis!

Senor had the unmitigated gall to blame President Obama for “Iraq unraveling”!!

Let’s see. The American administration of Iraq fired 100,000 Sunni Arabs from their jobs, abruptly abolished the whole Iraqi army, closed all the major state-owned factories, coddled corrupt Shiite politicians, and generally plunged the country into a massive civil war, which at its height was killing 3000 civilians a month and was responsible for 2 million being displaced abroad and 4 million internally, in a country of 26 million.

So Iraq is unraveling *now*?? What about when Senor and his friends were running it? And maybe the current unraveling had its roots in what Senor & co. did?

Senor used to come out almost daily and lie to the US press corps about how badly the GOP’s Iraq project was going, but he did once admit, “unofficially, ‘Paris is burning.'”

Senor, whose outfit destabilized the eastern stretches of the Arab world for perhaps decades, suggests that Obama should be judged by whether the world is more stable! I’m not sure how Obama can do anything about instability breaking out somewhere, but at least he hasn’t gone rampaging around illegally invading and occupying other countries.

Senor also took advantage of the interview to lament that the danger of Iran is being ignored and to warn about its alleged weapons of mass destruction program.

Gee, where have we heard that allegation before? There is no evidence that Iran even has a weapons program.

Senor, an inveterate warmonger without the slightest sign of a conscience, once took Mitt Romney to Jerusalem and urged an Israeli unprovoked attack on Iran.

As for Senor’s complaint that Washington is letting Putin get away with annexing Crimea, isn’t it reciprocal? Putin let Senor and his pals get away with illegally invading Iraq.

He also complained that Putin was getting his way in Syria, Iran, etc. I seem to remember that the Bush administration kept accusing Syria of enabling the guerrilla resistance against the US in Iraq. But I don’t remember Senor and his buddies doing anything about it. Nor did they do anything significant about Iran. As for Putin, Bush assured us that Putin was someone he could do business with: “I looked into his eyes and I saw his soul.” Senor has never criticized his former boss for that piece of naivete.

Being a Neocon means never having to say you’re sorry.

“Jewish Republicans are pointing to the pro-Israel credentials of President Bush’s new deputy press secretary, Dan Senor, as evidence that Jewish concerns are being noted regarding that position now that Ari Fleischer has left his post as press secretary. Senor got his start in politics in 1993 as an intern at the lobbying powerhouse the American Israel Public Affairs Committee. “Whether I was learning the ins and outs of Washington with my fellow interns or attending briefings on Capitol Hill, my internship at Aipac prepared me for my work in politics,” Aipac’s Web site quotes Senor as saying. More recently, Senor served as deputy press secretary for the top American administrator in Iraq, Ambassador L. Paul Bremer.”