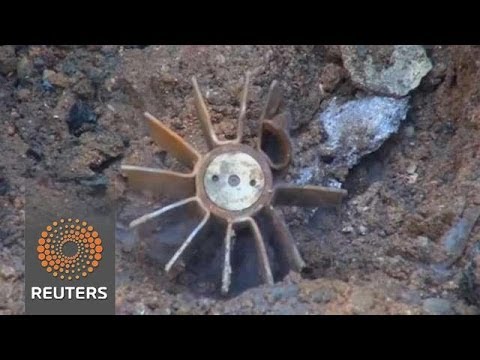 Events in Anbar mean that it will be very difficult for the people of the province to vote in the upcoming general election. Logistics are one problem, the fact that a third of the population has fled ongoing violence there and that many others have lost faith in the political process are others. Still, almost everyone else thinks it is imperative that the elections be held there.

It doesn’t seem as though the largest cities in Anbar province – Fallujah and Ramadi – are in any way ready for the elections. In Ramadi there are still running street battles going on in certain neighbourhoods between militants and the Iraqi army, and Fallujah is still under the control of revolutionary militants.

The conflict in Anbar turned violent when Iraqi government troops removed anti-government protests by Sunni Muslims that had been going for around a year.

Meanwhile in the rest of Iraq general elections are supposed to be taking place on April 30. However problems in Anbar could affect, not only the province itself, where elections may be delayed, but countrywide voting and the eventual formation of a government could also be stalled.

There are 15 seats allocated to Anbar province in parliament and the number of eligible voters is estimated at 900,000.

The Independent High Electoral Commission, or IHEC, is the authority that is supposed to prepare Iraq for elections and run electoral procedures, such as voter registration and the actual voting.

The first problem that IHEC faces is that around an estimated third of Anbar’s population has actually left the state, fleeing violence or the threat of it. Around 500,000 people have left, Anbar provincial council member, Nahla al-Rawi, told NIQASH. “That’s about one third of the population – last estimated at 1,636,831 by the Iraqi government,” al-Rawi said.

A lot of those locals went to provinces they felt were safer, such as Iraqi Kurdistan, Salahaddin, Kirkuk, Diyala and Baghdad, al-Rawi added. They also went to towns in Anbar where they thought it would be safer, such as Ana, Haditha, Rawa and Heet.

To overcome the difficulties in updating electoral records for these displaced people, IHEC is considering forming mobile voter registration teams in areas where they’ve fled to, so that they can record their details and give them electronic voter ID cards. Knowing the problems IHEC has in carrying out these procedures in areas that are actually safe makes it hard to imagine how they will be able to deal with this successfully in far more difficult circumstances.

IHEC has also suggested that elections be held the traditional way. Rather than using electronic cards, would-be voters show their identity papers then dip their fingers in an indelible ink, which prevents them voting twice.

IHEC’s other almost impossible task in Anbar is actually holding the elections in the troubled province. IHEC’s office in Anbar is close to Iraqi army headquarters in Ramadi and it recently submitted a report on security issues for the general elections.

According to a source from inside the office, “the report doesn’t contain good news”. The report apparently says that holding elections in Fallujah and in certain parts of Ramadi – in particular, the areas of Saqlawiya, Khalidiya, Malaab, 20th Street and Habbaniyah – will not be possible.

IHEC proposed moving ballot boxes from these places to other safer areas within Anbar. But again, the problem of those displaced from Anbar’s most dangerous areas would most likely not be able to get to them anyway.

“IHEC is looking at every possible option for holding elections in Anbar,” IHEC member Mohsen Jibara told NIQASH. “We will reach a final decision soon.”

Of course, there are also plenty of other issues around holding general elections in Anbar that have nothing to do with the technical and logistical problems IHEC is trying to resolve.

Firstly there is the concern that many Anbar locals will not want to participate in general elections. After all, before the current troubles started, many locals had been demonstrating for a long time to demand a peaceful reform of the political process in Iraq; those demands were never realised which hardly leaves them with a lot of trust in the political process.

“This is a major problem,” al-Issawi continued. “And I am very worried that, if elections are held while there are still military operations going on and many people are still in other parts of the country, then the results of any elections here won’t be accurate anyway.”

Additionally some of Anbar’s clerics have been issuing fatwas – religious decrees – saying that people should not take part in the elections. One of the most important came from senior Sunni cleric, Abdul Malak al-Saadi, who the protesters considered an important spiritual leader. In a statement, al-Saadi said that he didn’t think the upcoming elections were legitimate.

Additionally voting is likely to be far from the minds of those who have fled the violence in Anbar. Many are staying in schools or empty buildings that have only the most basic of facilities; a lot of the people who have come to Salahaddin are living rough on farms and in orchards. Those who fled to Diyala and Mosul are living in buildings related to religious institutions and in many cases there is more than one family to a room.

“It is very difficult for the people living in these horrible conditions to think about going to vote,” MP Liqaa al-Wardi from Anbar told NIQASH. “They’re cold and they’re hungry and elections are just about the last thing they are thinking about.”

It would also be very difficult for any would-be politicians to set about campaigning in Anbar. It would be impossible for a politician to tour the affected cities without feeling threatened. The anti-government militants in Anbar have also said that they don’t believe in these elections – they blame their own MPs and parliamentarians for what is going on in Anbar now and, previously, for what they saw as the marginalization and bad treatment of Sunni Muslims by the Iraqi government.

In fact, any campaign posters and signs that have been put up in Anbar are torn down.

Even the politicians who are supposed to be running for a seat in Baghdad’s Parliament seem to think that elections in Anbar will have to be postponed – not just because of security problems but also because of humanitarian needs.

“I don’t think that the elections can take place in Anbar,” Khalid al-Alwani, a Sunni Muslim and MP for the opposition Iraqiya bloc, told NIQASH. “If they are held, they’ll be a formality. There will be no real participation. There will also be lots of fraud. And the results are bound to favour the current government.”

If the people of Anbar cannot take part in the general elections at the end of April, then this will most likely affect all of Iraq. Iraqi law says that it is permissible to postpone voting in one province under special circumstances – and these clearly exist. However it also means that if the elections are held and a parliament is formed, the new government will not be able to be officially created until all provinces have held elections – which would effectively paralyse the state.

And forming a government without elected representatives from Anbar is only likely to cause even more trouble.

This may well be why Iraq’s current Grand Ayatollah, Ali al-Sistani, spiritual leader of millions of Shiite Muslims across the globe, and particularly the Shiite Muslims of Iraq, met with representatives from IHEC on February 28. Al-Sistani actually stays out of politics as much as possible and hasn’t met any politicians for about two years.

At a press conference held after the meeting in Najaf, the IHEC members told assembled media that al-Sistani had asked them to ensure that the people of Anbar participate in the elections. Al-Sistani also repeated what he always says: that he doesn’t support any particular party and his position is neutral.

Reuters reported this week about shelling in Ramadi