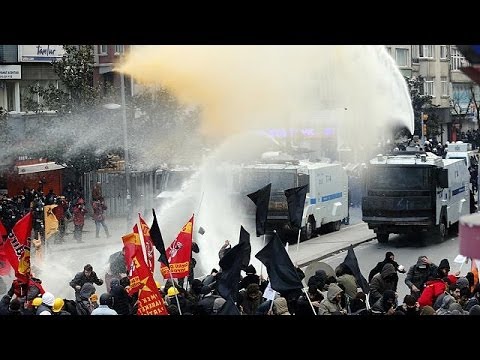 Tens of thousands of Turks demonstrated in Istanbul and other cities on Wednesday coming off the funeral of 15-year-old Berkin Elvan. Elvan had been in a coma since last June, when he went out to get bread for his family and inadvertently got caught up in the Gezi Park protests. He was allegedly struck by a tear gas canister fired by police. He became a symbol to youth protesters who alleged police brutality and disproportionate use of force to disperse protesters.

The crowds attempted to make their way to Taksim Square, the scene of last summer’s protest against Prime Minister Tayyip Erdogan’s plans to turn a park into a mall. They were, however, stopped by phalanxes of militarized police in battle gear, deploying industrial strength teargas and water cannons to disperse the crowds.

President Abdullah Gul and other officials of the ruling Justice and Development (AK) Party expressed their condolences over Elvan’s death. But PM Erdogan, who was campaigning in the countryside in conjunction with upcoming local elections, rather churlishly declined to mention Elvan.

Erdogan accuses the demonstrators of being part of a foreign plot and of being undemocratic in their methods, saying that if they want to compete politically they should mount campaigns for office instead of just milling about in the street.

Erdogan’s conception of democracy as simply holding elections, after which elected officials have free rein to do as they please, is closer to elective dictatorship or managed democracy than it is to democracy per se.

One problem of democracies based on elections is that sometimes there is a natural majority for a particular party or ideological tendency. If one party keeps winning, what prospect does the minority have of ever having a say in governance? The American founding generation was fearful of such elective majorities, and sought protections for political minorities in the form of checks and balances, as well as in the form of the Bill of Rights.

Thus, freedom of peaceable assembly is one way of countering the tyranny of the majority, by allowing the minority’s voice to be heard in public. After the Arab Spring, Erdogan appears to be afraid that such public protests could grow to the point where the elected government might be overthrown, and I would concur that that would be undemocratic. But Erdogan’s deployment of massive police repression is disproportionate. His tightening hold on the press and the judiciary is increasingly dictatorial. (TV news channels in Turkey were afraid to show the Gezi Park protests last summer, which is not a sign of a healthy democracy).

Ultimately, Erdogan is correct that if the opposition wants to amount to anything it will have to learn to compete successfully in elections. But he is dead wrong that peaceable protest is anti-democratic. Democracy is not elective dictatorship or the tyranny of the majority.

Euronews: “Turkey: clashes between police and protesters after funeral of teenager Berkin Elvan”

BBC: Police in Turkey clash with protesters after boy’s funeral