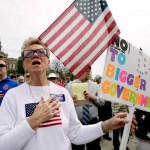 Some date the advent of the tea party to 2007, when then-presidential candidate Ron Paul held a “tax day tea party” fundraiser to fill his campaign coffers. But the broader movement began five years ago last week — shortly after Barack Obama was…