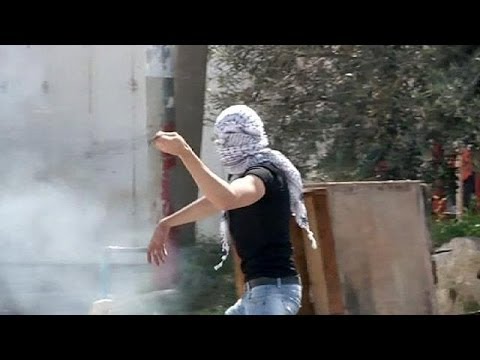 Right wing Israeli Prime Minister Binyamin Netanyahu on Sunday blamed the Palestinians for the collapse of peace negotiations that began last August under the auspices of Secretary of State John Kerry. In fact, the Palestinians took no Israeli land whatsoever since August, whereas the Israelis doubled their pace of building squatter settlements on Palestinian territory, territory over which they said they were negotiating! It is like discussing with someone sharing a piece of pie and then looking down and seeing that the other person had snarfed up half of it already.

Here are the top ten things Israel did to cause the negotiations to falter:

1. Even as it was agreeing to restart the talks with Palestine in August, 2013, the Israeli government signaled its lack of seriousness. I wrote then,

“On the eve of resumption of peace talks between Israel and Palestine, the far right Israeli nationalist government of Binyamin Netanyahu attempted to torpedo them with a series of provocative announcements. It announced that it would steal 100 acres of land from Palestinian families and build 240 housing units on it. The same government announced that it will grant 90 Israeli colonies on the Palestinian West Bank a special status bringing them “government grants, infrastructure investment, tax breaks and other benefits.” The colonies receiving these perks included several that had been considered illegal even by the expansionist Netanyahu government until recently.”

2. On August 11, Housing and Construction Minister Uri Ariel announced his intentions to to publish tenders for 1,187 new Israeli homes in the Palestinian West Bank. Minister Ariel said at the time, “We will continue to build, so it is clear this is just the start. This tune can’t be stopped.” Now that would be reassuring to the Palestinian side, wouldn’t it?

4. Israel doubled its pace of building illegal squatter settlements on the West Bank in 2013 over 2012– 2,534 new housing units versus 1,133 in 2012. President Obama remarked of this vast land theft, “we have seen more aggressive settlement construction over the last couple years than we’ve seen in a very long time — if Palestinians come to believe that the possibility of a contiguous, sovereign Palestinian state is no longer within reach, then our ability to manage the international fallout is going to be limited…”

5. In early January 2014, Netanyahu abruptly began demanding that the Palestinians recognize Israel as a “Jewish state” as part of any peace deal. I suspect that this demand was a stealth way of getting prior implicit agreement by the Palestine government to Avigdor Lieberman’s plan to strip over a million Palestinian-Israelis of their Israeli citizenship and render them stateless. In any case, it is a weird demand to make of another country. I pointed out that it is as though the US began demanding that other countries recognize it as a “white state” or a “Christian state” (given the non-religious character of the current Israeli government on the whole, likely “white state” is the appropriate analogy.) The Palestinians pointed out that they had recognized Israel within 1949 borders in the Oslo Peace Accords, in return for Israel returning to them 100% of the West Bank and Gaza. Israel got that enormous concession for free, since it reneged on virtually all the obligations it undertook in the Oslo accords and did not in fact withdraw from any of the West Bank at all.

7. On January 14, Israeli Defense Minister Moshe Yaalon attacked Secretary of State Kerry’s efforts to secure a negotiated peace, accusing him of having a “messianic obsession”. He said that the American plan for security arrangements was not worth the paper it was printed on and added, “Secretary of State John Kerry — who arrived here determined, and who operates from an incomprehensible obsession and a sense of messianism — can’t teach me anything about the conflict with the Palestinians.” When a senior member of the cabinet in the government of one of the two parties to a negotiation admits such complete disdain for the negotiator, it isn’t a positive sign. Yaalon concluded, “The only thing that might save us is if John Kerry wins the Nobel Prize and leaves us be.” By “let us be,” Yaalon meant “let us go on swallowing up Palestinian territory and kicking Palestinians out of their homes.”

8. In early February, 2014, Netanyahu government members slammed Kerry as an anti-Semitic bigot, slammed Netanyahu for allegedly falling under his influence, and one member of the cabinet actually led a 2000-strong prayer protest with rabbis pleading with Yahweh to remove Mr. Kerry’s Rasputin-like hold over the Israeli prime minister. I wrote at the time,

“Economy Minister Naftali Bennett . . . slammed Israeli Prime Minister Binyamin Netanyahu as being under Kerry’s influence, when Netanyahu was said to be considering leaving Israeli squatters on Palestinian land under the authority of the Palestine government in a peace deal leading to Israel relinquishing its current annexation project. Naftali Bennett is from the small religious Jewish Home Party that is in coalition with the largely secular Netanyahu government. Jewish Home is dead set against returning to pre-1967 borders or allowing the emergence of a Palestinian state, and has been threatening to withdraw from the government if Netanyahu signs a Kerry-brokered peace treaty with the Palestinians. Now Israeli parliament member Motti Yogev, also from the Jewish Home Party, has attacked Kerry, this time as bigotted against Jews. He said, “Prime Minister Binyamin Netanyahu is acting under Kerry’s obsessive pressure, which may have anti-Semitic undertones . . . Kerry is not here to reach a compromise. He wants to decrease the Jewish presence in the Land of Israel and create a Palestinian state.” Yogev himself lives in an Israeli squatter settlement on Palestinian territory. Housing Minister Uriel Ariel of the same party led a protest of some 2000 on Thursday, with rabbis praying that Netanyahu will stand firm against Kerry.”

From a Palestinian point of view, the Americans more or less channeled Israeli proposals, so hearing the Israelis denounce their own talking points as anti-Semitic wouldn’t exactly inspire Palestinian confidence.

10. Israel in late March abruptly reneged on its agreement to release about 100 Palestinian prisoners, put in jail before 1993, whom it had earlier agreed to release as part of the Oslo Peace Accords, but whom it had not in fact let go. The Israelis released 3/4s of the ones it had agreed to but refused to let the last 25 or so go. It was this piece of bad faith (along with all the others above) that impelled Palestine president Mahmoud Abbas to sign the Geneva Convention of 1949 and other international instruments, to which Israel objects (why?).