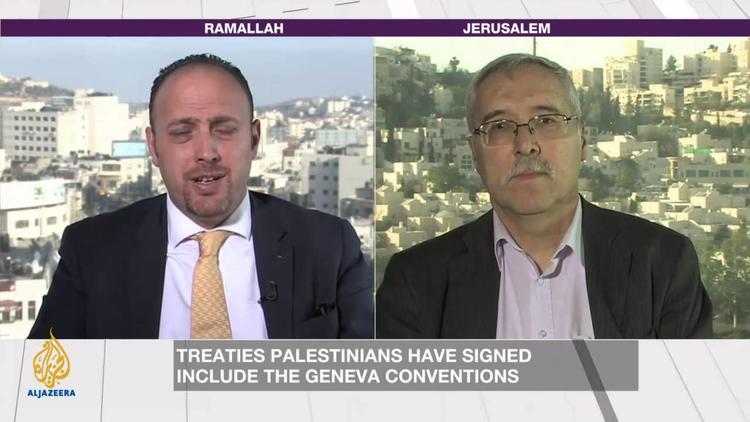 (Jerusalem) – The US government should support rather than oppose Palestinian actions to join international treaties that promote respect for human rights.

On April 1, 2014, the Palestinian leader, Mahmoud Abbas, signed accession instruments for 15 treaties, including the core treaties on human rights and the laws of war. On April 2, the US ambassador to the United Nations, Samantha Power, testified in front of Congress, that in response to the “new Palestinian actions” that the “solemn commitment” by the US to “stand with Israel,” “extends to our firm opposition to any and all unilateral [Palestinian] actions in the international arena.”


Palestine’s adoption of human rights and laws-of-war treaties would not cause any change in Israel’s international legal obligations.

Abbas signed letters of accession to core human rights treaties including the International Covenants on Civil and Political Rights and on Economic, Social and Cultural Rights and the conventions on the rights of the child; the elimination of discrimination against women; and against torture, apartheid, and genocide. Abbas also signed requests for Palestine to accede to treaties on the laws of war, including the Hague Regulations of 1907, the four Geneva Conventions of 1949, and their first additional protocol.

Ratification of the Hague Regulations and Geneva Conventions would strengthen the obligations of Palestinian forces to abide by international rules on armed conflict. Palestinian armed groups are already obliged by customary international law on armed conflict, including prohibitions on targeting civilians and on carrying out attacks that do not discriminate between civilians and combatants. Armed groups in Gaza, which operate outside the authority or effective control of the Palestinian leadership that signed the treaties, have committed war crimes by launching indiscriminate rocket attacks against Israeli population centers.

Abbas signed the treaties for the state of Palestine, which the UN General Assembly granted non-member observer state status in 2012.

The US appears to oppose Palestine joining human rights treaties in part because it is afraid they will gain greater support for Palestinian statehood outside the framework of negotiations with Israel. According to Power’s testimony to a congressional subcommitteeon April 2, the US has “a monthly meeting with the Israelis” to coordinate responses to possible Palestinian actions at the UN, which the US is concerned could upset peace negotiations. Power said that the US had been “fighting on every front” before peace negotiations restarted in 2013 to prevent such Palestinian actions. Discussing US legislation that bars US funding from UN agencies that accept Palestine as a member, Power noted, “The spirit behind the legislation is to deter Palestinian action [at the UN], that is what we do all the time and that is what we will continue to do.”

The US may also fear that the Palestinian moves are only a first step towards joining the International Criminal Court (ICC). But Abbas did not sign the Rome Statute of the ICC, which would allow the court to have jurisdiction over war crimes, crimes against humanity, and genocide committed in Palestine or by Palestinians. Power, in her remarks, said that the US is “absolutely adamant” that Palestine should not join the ICC because it “really poses a profound threat to Israel” and would be “devastating to the peace process.”

In either case, the US is mistaken to oppose a step that might lead to greater respect for rights, which could help create a better environment for peace negotiations, Human Rights Watch said.

“The US should stop allowing its separate concerns to stand in the way of a step that could enhance Palestinian authorities’ and armed groups’ respect for basic rights,” Stork said. “The US made the wrong decision to oppose greater rights protections.”

On April 1, the day Abbas signed the accession instruments for the treaties, Israel reissued tenders for the construction of 708 settlement housing units in the Israeli settlement of Gilo, while Israeli forces demolished 32 Palestinian-owned homes and other structures in the occupied West Bank, forcibly displacing 60 people, according to data collected by Ir Amim, an Israeli civil society group, and the UN Office for the Coordination of Humanitarian Affairs. Under the Geneva Conventions and the ICC statute, settlement construction and the deliberate forcible transfer of civilians from their homes and communities in occupied territory are war crimes.

Israel has ratified core human rights treaties but officially claims that its rights obligations do not extend to Palestinians in the territory it occupies, where it says the laws of armed conflict apply exclusively. UN rights bodies have completely rejected this argument on the basis that an occupying power’s human rights obligations extend to people living under its effective control. Israel additionally claims, also in the face of nearly universal rejection, that the Fourth Geneva Convention, which prohibits transferring its civilian population into occupied territory, does not apply to its settlements in the West Bank.