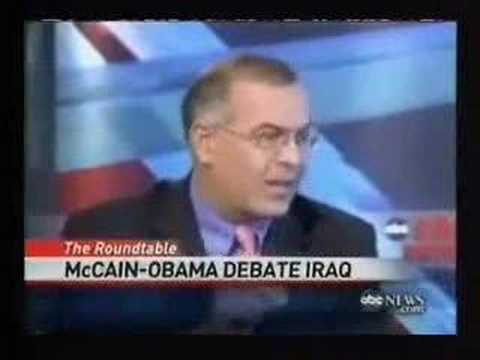 “Basically since Yalta we’ve had an assumption that borders are basically going to be borders, and once that comes into question, if in Ukraine or in Crimea or anywhere else, then all over the world … all bets are off . . .”

Brooks is an intellectual bully who likes bullies. He once criticized me in an NYT column for doubting that far right wing Israeli hawk Ariel Sharon was a man of peace. We know what sort of “peace” with the Palestinians would have made Sharon happy. It is quite annoying that Zionists keep demanding that the rest of us assent to their belligerence. Imagine if Serbian-Americans who supported Slobodan Milosevic had had this sort of megaphone in the US.

The post-Yalta assumption that ‘borders are going to be borders’ of which Brooks says he approves was violated by Israel, which is illegally annexing the Palestinian West bank. But that violation of international law doesn’t bother Brooks in the least, though it causes the US among its biggest diplomatic headaches in the Muslim world. Shouldn’t he be complaining that Obama hasn’t properly stood up to the Likud Party?

Brooks exemplifies the problem with US foreign policy, which is that the inside-the-beltway chickenhawks with small peckers equate military aggression with “manhood.”

You know who had a “manhood” problem? George W. Bush. He acted childishly, wantonly invading Iraq without a shred of international legality, because Saddam “tried to kill my daddy.” He even adopted the diction of a 4-year-old as he initiated the mass slaughter of several hundred thousand people and the displacement of millions. You see, the opposite of “manly” is not, as Brooks imagines, “cautious.” It is childish petulance.

Brooks, of course, was a cheerleader for the Iraq War. How often do you have to be completely wrong on the big issues of our time before you stop being given a prominent perch in giving the country policy advice?

Brooks also seems not to know much history. After Yalta, the Soviet Union invaded both Hungary and Czechoslovakia, and the US did nothing about either. Brooks is insinuating that Dwight D. Eisenhower, the Supreme Allied Commander who destroyed Adolf Hitler, has a “manhood problem”! Or LBJ, whose presidency was ruined by his inability to let Vietnam go when the US was obviously losing the guerrilla war there. Manhood isn’t recklessly confronting a rival in the rival’s own sphere of influence. The US is very far away from Crimea and would be unwise to get entangled there. Obama’s sanctions on Russia have already spooked its entrepreneurs, and are the most likely path to effective pressure on Moscow.

As for Syria, Brooks seems not to have noticed that by using diplomacy, Obama has managed to have 75% of Syrian chemical weapons neutralized, and is on track to see the whole stockpile destroyed. Tossing some cruise missiles on Damascus would not have accomplished that, and might well have had the opposite effect. Brooks should try reading his own newspaper sometime.

Beyond that, there isn’t anything useful the US can do there. Now that the most effective rebel fighters are al-Qaeda affiliates, you really wouldn’t want to hand Damascus over to them. The hope that the US could make sure only “moderates” got any powerful weaponry supplied to the rebel side is completely forlorn, as was demonstrated in Iraq. Brooks apparently would be happier if Obama had bombed Damascus, a symbolic action that would not have affected the course of the civil war but which could have had dire consequences for US interests in the region. That isn’t manly, it is adolescent.

Apparently you have to have a Peter Pan complex to be a big dog in Washington, ever staying the little boy who won’t grow up and who likes to play with six shooters. Bion of Borysthenes, an ancient Greek author, observed that “Boys throw stones at frogs in sport, but the frogs die in earnest.” The little boys are the Washington hawks. The frogs are the rest of the world. Only, the rest of the world is not actually helpless frogs. As 9/11 should have signaled to us, there is a price to pay for recklessly inserting ourselves into quagmires in global backwaters. It isn’t worth it, and Obama is a man because he knows that, whereas Brooks is an insecure little boy.