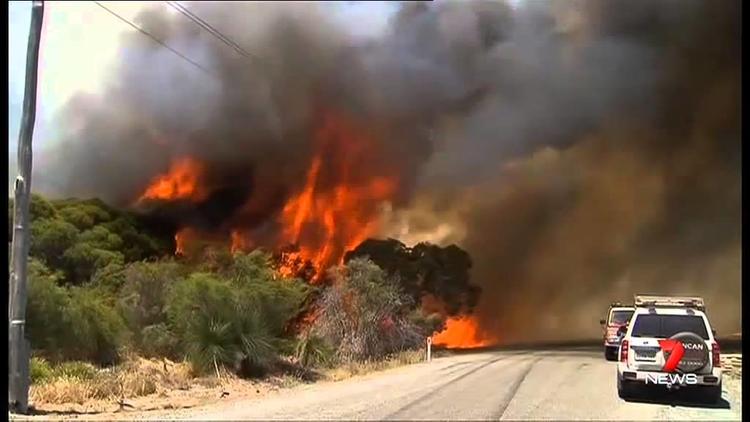 Some say the world will end in fire,
Some say in ice.
From what I’ve tasted of desire
I hold with those who favor fire.
But if it had to perish twice,
I think I know enough of hate
To say that for destruction ice
Is also great
And would suffice.”

Well, we know the answer to his question, and he gets his first wish. It is fire, i.e., massive global warming, that threatens the world as we know it.

The most [pdf] pressing points in the UN climate scientists panel [Intergovernmental Panel on Climate Change] are pressing indeed, to the point of being apocalyptically scary. These effects are being produced by human beings, who are spewing 32 billion metric tons of the greenhouse gas carbon dioxide into the atmosphere every year. Climate change denialists cannot tell you how all that carbon just disappears (it does not). CO2 keeps the sun’s energy from radiating back into space, producing warming temperatures (on average) on the earth’s surface. We’re putting so much carbon dioxide out there that we risk seriously destabilizing the world’s atmosphere. Repeated powerful storms or stationary long-lasting storms will strip the land of its plants and animals. Sea level rise will deprive us of much coastal property. But the IPCC goes beyond that, threatening us with widespread crop failure, hunger and war.

“Based on many studies covering a wide range of regions and crops, negative impacts of climate change on crop yields have been more common than positive impacts ( high confidence ) . . . Climate change has negatively affected wheat and maize yields for many reg ions and in the global aggregate ( medium confidence )…”

To set this alarming conclusion in context, The International Development Research Centre of Canada writes, “Wheat is the staple food for 35 percent of the world’s population, and provides more calories and protein in the world’s diet than any other crop. As for maize, half of the global crop is planted in Asia. It comprises 40% of grain production in Africa.

“Impacts from recent climate – related extremes , such as heat waves, droughts, floods, cyclones, and wildfires, reveal significant vulnerability and exposure of some ecosystems and many human systems to current climate variability ( very high confidence ). Impacts of such climate-related extremes include alteration of ecosystems, disruption of food production and water supply , damage to infrastructure and settlements, morbidity and mortality, and consequences for mental health and human well – being. For countries at all levels of development, these impacts are consistent with a significant lack of preparedness for current climate variability in some sectors.”

As Jesus said, the poor get poorer. Climate change will hit the world’s least prosperous with the greatest devastation, even to the point of food insecurity.

In other words, a civil war like that in Syria puts Syrians at greater risk from climate change damage, since people in war cannot attend to, e.g. irrigation networks and social cooperation.

“The key risks that follow, all of which are identified with high confidence, span sectors and regions. . .

i. Risk of death, injury, ill – health, or disrupted livelihoods in low-lying coastal zones and small island developing states and other small islands, due to storm surges, coastal flooding, and sea-level rise.

ii. Risk of severe ill-health and disrupted livelihoods for large urban populations due to inland flooding in some regions.

iii. Systemic risks due to extreme weather events leading to breakdown of infrastructure networks and critical services such as electricity, water supply, and health and emergency services.

iv. Risk of mortality and morbidity during periods of extreme heat, particularly for vulnerable urban populations and those working outdoors in urban or rural areas.

v. Risk of food insecurity and the breakdown of food systems linked to warming, drought, flooding, and precipitation variability and extremes, particularly for poorer populations in urban and rural settings.

vi. Risk of loss of rural livelihoods and income due to insufficient access to drinking and irrigation water and reduced agricultural productivity, particularly for farmers and
pastoralists with minimal capital in semi-arid regions.

vii. Risk of loss of marine and coastal ecosystems, biodiversity, and the ecosystem goods, functions, and services they provide for coastal livelihoods, especially for fishing communities in the tropics and the Arctic.

viii. Risk of loss of terrestrial and inland water ecosystems , biodiversity, and the ecosystem goods , functions, and services the y provide for livelihoods.

Many key risks constitute particular challenges for the least developed countries and vulnerable communities, given their limited ability to cope.”

And people say the IPCC reports are too cautious. This is a freaking catastrophe!