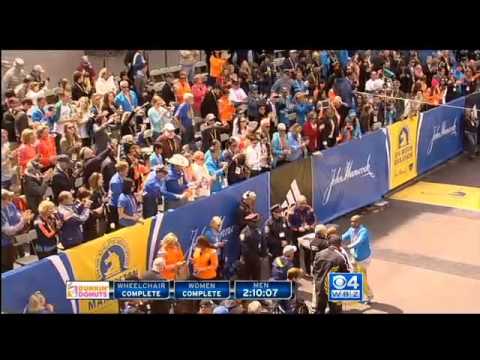 Yesterday Boston responded with its vigorous spirit of community and transcendence to the cowardly terrorism that marred the Boston Marathon in 2013, coming out in record numbers for the 2014 event. The fastest man in the competition is being touted as the first American male to win since 1983. But of course Meb Keflezighi is a naturalized American (like some 10 percent of the current US population), an immigrant from Eritrea.

The discourse on the American far right against immigrants, which has infected even some mainstream politicians, depicts them as dangerous, as importers of alien values, as job-thieves. In fact, immigrants are remarkably well-behaved, valuing their achievement in reaching the United States, with all of its opportunities, and not wanting to ruin it by a run-in with the law. They often do bring distinctive religious or cultural beliefs, but these enrich the American fabric, just as the Puritans, Irish Catholics, Eastern European Jews, Lebanese and Syrian Muslims, and Greek and Syrian Eastern Orthodox had done over the past two centuries. And they for the most part do jobs that other Americans won’t or can’t do, rather than taking away jobs from anyone.

The Tsarnaev brothers, authors of the terror a year ago, seemed to confirm the worst prejudices of the anti-immigrant crowd. Tamerlan and Dzhokhar Tsarnaev turned violent, killing three and injuring 264 before killing a further police officer. Tamerlan was killed in a shootout, and Dzhokhar was captured after being badly wounded. The dark political history of modern Chechnya seems to have scarred them; it strove for independence from Russia before being brutally crushed by Boris Yeltsin in the 1990s, and then experienced a Muslim extremist movement early in the last decade that was smashed by Vladimir Putin. They were brought up in peaceful Kyrghyzstan in exile, but were apparently haunted by the horrors of Chechnya’s fate, and attracted by Chechnya nationalism in, at one time or another, both its secular and radical Muslim guises. Dzhokhar became a naturalized American.

But in fact both young men showed promise and initiative. Tamerlan had real talent as a boxer. Dzhokhar got into college. They could have built productive lives in their new homeland. That they did not had nothing to do with their being immigrants or aliens. They made personal choices, to bring the terror Chechnya had experienced into the US. A person’s violence tells you that the person has or has developed a violent character. That cannot be read off from background. Some white, native-born Americans turn violent; some, like Timothy McVeigh, commit terrorism. So to do some Jewish-Americans. That is a disorder of their character, not a manifestation of their ethnic background. The few hundred Chechnyan-Americans have been perfectly peaceful citizens.

Keflezighi stands for everything that, in the end, the Tsarnaevs did not. But in fact his background and circumstances were not so different from theirs. He was arguably poorer and more disadvantaged than they growing up. Like Chechnya, Eritrea has had a troubled history during the past decades. It had been an Italian colony, like Libya (and likewise murderously repressed under Mussolini), but Italy lost it during WW II. It became part of Ethiopia in the early 1960s, but some Eritreans immediately launched a nationalist rebellion. (I lived in Asmara 1967-68 and saw the beginnings of the rebellion there with my own eyes). After decades of strife, Eritrea became independent in 1993. But in 1998-2000 Eritrea and Ethiopia fell into a war that left 70,000 dead. Eritrea is a country of 6 million in the horn of Africa, likely about 60 percent Christian and 40 percent Muslim. As with some Chechnyan leaders, Eritrean President Isaias Afwerki stands accused of backing terrorist groups— in his case, against Ethiopia. Although he is a Coptic Christian, he is accused of being involved in Somalia’s al-Shabab extremists.

Keflezighi’s autobiography makes clear that his family is Eritrean patriots who resent Ethiopian dominance. He could have nurtured a hatred in that regard. He did not. He went to UCLA, where he was an NCAA athlete, graduating in 1998. He showed character. When he ran yesterday, he had the names of the three who were killed the year before written in marker on his bib. He stood for America, for unity, for overcoming adversity without violence.

Keflezighi’s victory in the competition and in his magnificent spirit, is a vindication of the 30 million living Americans who were born abroad. Whether Buddhist or Hindu, Muslim or Christian, they bring us their talents, their indomitable will, their magnificent contributions, their humane values. As Martin Luther King, Jr., said, Americans ought to be judged not by their ethnicity but by the content of their character. Keflezighi and his birth-country had suffered tremendously. But he overcame that legacy to embrace America with love. We love him right back. Today, he is the face of Boston resurgent.