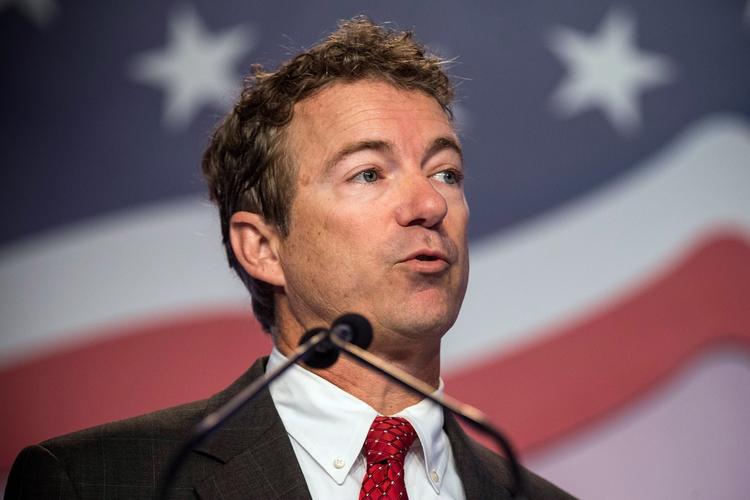 David Corn at Mother Jones got the scoop: In 2009, Rand Paul gave a talk at Western Kentucky University in which he accused former vice president Dick Cheney of having gotten up the Iraq War to rescue his troubled oil services company, Halliburton, which– along with its subsidiaries– was awarded enormous no-bid contracts for work in post-invasion Iraq. Corn published the video at Mother Jones.

In it, Rand warned of the Military-Industrial Complex: “”We need to be fearful of companies that get so big that they can actually be directing policy… When the Iraq War started, Halliburton got a billion-dollar no-bid contract. Some of the stuff has been so shoddy and so sloppy that our soldiers are over there dying in the shower from electrocution. I mean, it shouldn’t be sloppy work; it shouldn’t be bad procurement process. But it really shouldn’t be that these people are so powerful that they direct even policy.”

There’s a great YouTube of Dick Cheney in 1995 defending [President] Bush No. 1 [and the decision not to invade Baghdad in the first Gulf War], and he goes on for about five minutes. He’s being interviewed, I think, by the American Enterprise Institute, and he says it would be a disaster, it would be vastly expensive, it’d be civil war, we would have no exit strategy. He goes on and on for five minutes. Dick Cheney saying it would be a bad idea. And that’s why the first Bush didn’t go into Baghdad. Dick Cheney then goes to work for Halliburton. Makes hundreds of millions of dollars, their CEO. Next thing you know, he’s back in government and it’s a good idea to go into Iraq.”

The day after 9/11, [CIA chief] George Tenet is going in the [White] House and [Pentagon adviser] Richard Perle is coming out of the White House. And George Tenet should know more about intelligence than anybody in the world, and the first thing Richard Perle says to him on the way out is, “We’ve got it, now we can go into Iraq.” And George Tenet, who supposedly knows as much intelligence as anybody in the White House says, “Well, don’t we need to know that they have some connection to 9/11?” And, he [Perle] says, “It doesn’t matter.” It became an excuse. 9/11 became an excuse for a war they already wanted in Iraq.”

Many commentators have argued that Rand sounds like a leftist, and they have a point. I’m in fact confused by Paul’s argument here, which begins with an argument against companies getting too big.

Libertarians like Rand often hold that corporations are inherently good and efficient, but are corrupted by the state, which plays favorites and disrupts the market’s magic hand for the purposes of private power. In this philosophy, a corporation would never go to war, but governments routinely do so, and drag corporations into these conflicts with distorting effects. (This premise is patently false– look at the East India Company’s freebooting conquest of India in the late 18th and early 19th century, with which the British state took decades to catch up). Paul’s family has an unusual take on libertarianism, emphasizing states’ rights and limited but still fairly extensive Federal government, though with a relatively isolationist approach to foreign policy. (Rand Paul the father argues against the US defending Taiwan from Communist China, e.g.)

The question is whether Paul having taken this stand puts him out of the running for the Republican presidential nomination. Can the party faithful really swallow his attribution of an entire GOP war to the naked greed of the former GOP vice president? 66% of Republicans still say that the Iraq War was not a mistake. As for Cheney, only 36 percent of Americans think favorably of him, but surely they are all Republicans and constitute the bulk of the GOP. The polls would suggest that Paul’s position, and certainly the clarity of his position, might be a drawback.

As for the issue at hand, my own argument, in Engaging the Muslim World, is that Cheney did want to open Iraq and Iran to petroleum development by firms like Halliburton. This is because in the late 1990s it was foreseeable that major new petroleum fields would be harder to find and competition for them from Asian firms would dramatically increase. Cheney initially tried to get Congress to lift AIPAC sanctions on the two countries, intended to protect Israel from strong governments in Baghdad and Tehran. At that time he spoke of diplomatically opening Iran, even if it took 10 years. When that effort to remove sanctions failed, I argue, Cheney decided that only regime change would satisfy Congress and also allow sanctions to be lifted, and he allied with the Neoconservatives in that cause.

The C-Span video referred to by Rand is here