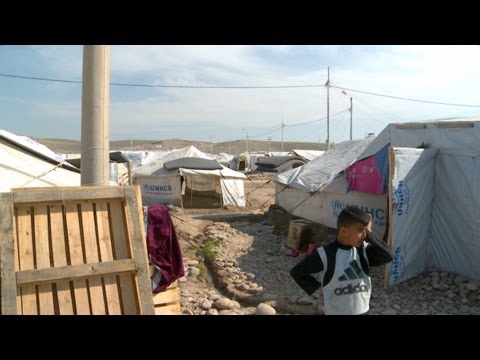 (By Abdul-Khaleq Dosky in Dohuk, for Niqash)

The Iraqi government and the government of the semi-autonomous region of Iraqi Kurdistan are digging a trench along the Iraqi border with Syria. Ostensibly it is to better control this porous border area and to prevent smugglers and extremists from crossing into the country. The trench, which is two meters wide and three meters deep, passes through six border villages – Chelky,  Suhaila, Shibani, Moska, Kalky and Qahira – and it is already having an impact on the lives of locals in these places.

“The people here have deep social and business relationships with the villagers on the Syrian side of the border,” says a local who wanted to be known only as Sami, who lives in Suhaila village. “We have relations there and we used to go back and forth into Syria with no problem. Now our movement is going to be restricted. The trench is also going to impact on the livestock trade across borders, which we’ve been doing for years.”

“My daughter-in-law’s family lives in the village opposite ours, on the other side of the border,” says another Suhaila local, a woman called Salman. “She used to be able to go and visit her family whenever she wanted to. Now she won’t be able to,” she complained to NIQASH.

And Ahmad Mustafa, a farmer living in Qahira village, says the trench actually passes through his property – he’s in the process of trying to get compensation for the loss of crops in this part of his farm; he usually plants wheat and barley there.

It is not just the villagers who are upset about the trench. Dozens of Syrian activists who have found refuge in Iraqi Kurdistan staged a sit-in in front of local government buildings in the region’s capital, Erbil. They demanded that the digging of the trench be halted and chanted slogans like, “western Kurdistan needs help, not trenches”. Western Kurdistan refers to the fact that if the Kurdish people had their own country in areas where they are most populous, the Syrian Kurdish areas would make up the west of a Kurdish nation.

One of the men driving the diggers working on the trench says those on the Syrian side are also very upset. “When they saw the diggers they tried to attack us,” says the driver, Mohammed Saeed. “Last Thursday there were around 400 people and they tried to attack us when we started work. They said they wanted to burn our vehicles. If the Peshmerga [Kurdish military] hadn’t intervened, I think we would all be dead by now.”

And at one stage last week – on Saturday April 12 – the work on the trench saw Syrian Kurdish security forces, who control most of this part of Syria, shut the border crossing on their side, an Iraqi official told NIQASH. “They closed the border without any prior warning,” Shaukat Barbharri, who is in charge of the Saemalka border crossing, says. “There were dozens of people who couldn’t get through and it became really crowded.” In the past the Syrian Kurdish militias who control this area have closed the border crossing because of their displeasure at actions taken by Iraqi Kurdish authorities.

Despite all vehement objections though, the digging of the trench is still going ahead. “Every day another 500 meters of this trench will be dug,” says Brigadier General Hashim Sitay, commander of the Eighth Peshmerga Brigade – part of the Iraqi Kurdish military – stationed on the Iraq-Syria borderlands. “The work is being done in coordination with the Iraqi government, which dug the trench all along the border from Ramadi. Now it has reached Qahira, which is the point at which the Iraqi Kurdish region begins.”

“The aim of this trench isn’t to isolate Syrians,” Sitay argues. “It is to prevent the infiltration of smugglers and terrorists who are entering Iraq illegally on this border. And the trench isn’t going to mean that the border will be closed to Syrian refugees. All official border points will remain open.”

NIQASH asked Sitay if he really thought the trench would work the way security forces wanted it to. “The trench will reduce the number of incidents,” he says confidently. “The number of security risks entering by car will drop for sure. Additionally there will be well guarded checkpoints all along the trench and these checkpoints will also play an important part in preventing smugglers and terrorists getting in.”