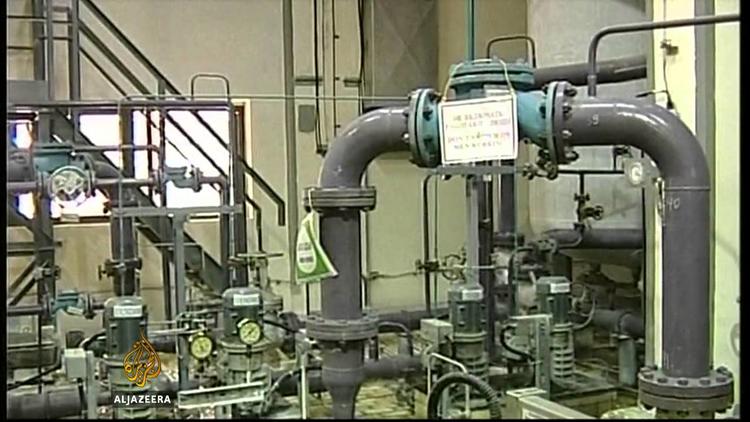 Russia has rejected US criticism of a plan that has been floated to import 500,000 barrels a day of petroleum from Iran on a barter basis.

The US Treasury Department has been instructed by Congress to place a financial blockade on Iran. The US has had that country kicked off major international bank exchanges, making it very difficult for Iran to pay for imports or get paid for exporting petroleum. In addition, the US has twisted the arms of many countries, not to buy Iranian petroleum or not to buy very much of it, by threatening third-party sanctions on their firms otherwise. These US tactics have reduced Iran’s exports from 2.5 mn. barrels/day to only 1 mn b/d. A handful of Asian countries has been given permission to continue to import Iranian oil as long as they don’t increase those imports, as part of the current round of negotiations between Iran and the permanent members of the UN Security Council plus Germany (P5 + 1).

Russia says it rejects unilateral US sanctions as without basis in international law. That is, UNSC sanctions are binding on UN members. But no one elected the US to go around sanctioning other countries or insisting that everyone in the world abide by its sanctions. The salience of US boycotts derives from the country constituting 22% of the world gross domestic project, being a $16 trillion a year economy. Everyone in the world would like to invest in the US and benefit from US economic growth, or try to attract US investment. The Treasury Department threatens to place entire corporations under a ban if they defy US sanctions. Shell and Total S.A., for instance, withdrew from helping Iran with liquid natural gas (LNG) exports after Washington menaced them.

At $38 bn a year, US-Russian trade is minimal. Russian entrepreneurs and financiers nevertheless fear the third-party sanctions in a way the Russian President Vladimir Putin does not.

Russia does roughly $450 bn a year in trade with Europe, mainly via gas and oil exports, and $150 bn a year with China and the Far East. Putin wants to expand the Asian trade so as to become less dependent on Germany and other Western European Powers.

Russia can contemplate a move that would attract US sanctions precisely because Russian-Iran trade is likely the wave of the future. Moreover, the US is already talking sanctions on Russia over its annexation of Crimea.

Some observers feel that if Russia does the deal with Iran, it will reduce pressure on Tehran to make a deal with the US and the P5+1. I don’t think this analysis is correct. President Hassan Rouhani wants better relations with Washington and wants to remove the US unilateral sanctions. So he has every reason to negotiate at Geneva rather than risk his country going back into deep isolation. The Russia deal would be welcome in Tehran, but it isn’t the big enchilada that they are going for.

A US boycott of Russian energy firms would mean very little. Europe, in contrast, gets 1/3 of its natural gas from Russia and is highly unlikely to cease doing so voluntarily. So I don’t think Europe is going to join a boycott of say, Gazprom. But if the US tries to sanction Russian energy firms, they have the means to wriggle out of it and come back in a year or two with a better physique.

The Russian rumblings raise another question: By pursuing debilitating financial sanctions on other countries, is the US risking the dollar’s centrality as the world’s reserve currency? Russia may attempt to develop its China-based finances instead.

If Russia puts the oil deal off until after August, it may be moot. That is, the P5+1 may have already have made a deal with Iran by then, allowing expansion of exports of the sort Russia is contemplating.

If Russia forges ahead now, it may take some of the pressure off Tehran, but wouldn’t remove all the incentives Tehran has to reach a deal.