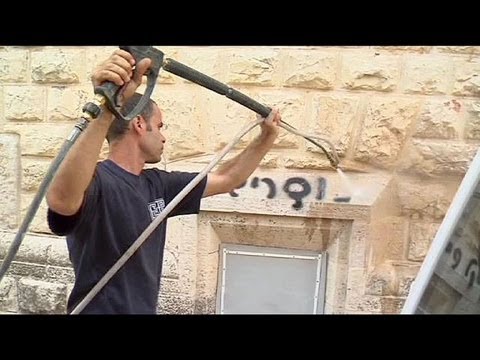 Just weeks before Pope Francis’ first official visit to the Holy Land – the first Papal visit in 50 years – a number of Christian holy sites in Israel and Palestine have been targeted in ‘price tag’ attacks by the radical Israeli settler movement. The most recent attack occurred at the Our Lady at Deir Rafat Monastery located on the site of the depopulated former Arab village of the same name, north-west of the Israeli city of Beit Shemesh. The graffiti, sprayed in Hebrew on the outer walls of the Monastery, read ‘Jesus is an ape and Mary is a cow’, to which the Latin (Catholic) Patriarch of Jerusalem, Fouad Twal, responded, ‘I don’t believe this is a proper way to receive the Holy Father here next month.’ However, this is only the latest in what the UN High Commission reported was a 150% increase in ‘price tag’ attacks since 2008, with over 788 registered attacks from 2012-2013.

Although the majority of these attacks have occurred in the West Bank, Christians in Jerusalem and throughout Israeli have also come under attack. As a series of 2012 Haaretz articles pointed out, Christian clergy who dress in ‘priestly garb’ are frequently spat on as they walk through Jerusalem’s Old City; as one priest commented ‘it’s almost impossible to pass through Jaffa Gate without this happening’. In fact, these anti-Christian attacks have become so frequent that in 2012 the Catholic leadership of Palestine issued a statement entitled, Declaration of the Assembly of Catholic Ordinaries of the Holy Land, in which they urged the Israeli authorities to address the ‘teaching of contempt’ in Israeli schools. Suggesting that, ‘the time has come for the authorities to act and to put an end to this senseless violence and to ensure a “teaching of respect” in schools for all those who call this land home.’

However, the Deir Rafat attack also highlights the contempt that the settler movement and radical right hold for the peace process.   Other areas of the Monastery at Deir Rafat were tagged with the slogans, ‘America is Nazi Germany’ and ‘the price to pay for the peace agreement’, which suggests that the settler movement in some way associates attacks on Christian sites with revenge against America or the international community. But the attack on a Catholic shrine just weeks before the visit of Pope Francis, could also be interpreted as a protest against the historically pro-Palestinian stance of the Vatican.

Since the 1960s the Vatican has been a staunch supporter of the Palestinian right to self-determination and the equal rights of all faiths in Jerusalem. Counter to the settler movement’s raison d’être, which seeks the Judaisation of Jerusalem and biblical Israel, the Vatican has continually petitioned for the equal rights of all faiths in the city; such that no race, religion or nationality should be made to feel subordinate or alienated from any other. In fact the status of Jerusalem has been central to the Vatican’s diplomatic policy towards Israel and the wider Middle East since 1948. As Pope John Paul II commented, ‘I am convinced that the failure to find an adequate solution to the question of Jerusalem, and the resigned postponement of the problem, only compromise further the longed-for peaceful and just settlement of the crisis of the whole Middle East.’

It is expected that Pope Francis will renew efforts for the peaceful solution to the Israeli/Palestinian conflict as he travels throughout the Middle East. However, the status of Jerusalem is perhaps farther from resolution than ever, and, with Easter celebrations set to begin in Jerusalem this weekend, Palestinian Christians, who face the continual threat and intimidation of ‘price tag attacks’, also face difficulties in travel to holy sites in Jerusalem and Nazareth.

For those living in the West Bank and Gaza, pilgrimage to holy sites in Israel is extremely difficult. As a Christian in the Palestinian village of Taybeh related, ‘My husband and I stopped going to Jerusalem for the holidays because it is a terrible thing to fight and argue to get into the church after you have been issued a permit that you are frequently not allowed to use.’ The permit process itself involves a lengthy application, filled out in Hebrew (a language that many Palestinians do not read or write) and frequent trips back and forth to the District Coordinating Offices, where the applications are filed.

Permits will typically allow entry for one day or, if the applicant is lucky, several days. However these permits are frequently denied, and those that are granted quickly expire – forcing most Christians to reapply for each visit. If a permit is granted, the Christian pilgrims (and all other Palestinians) face nearly unimaginable levels of humiliation as they make their way to holy sites. As one Christian Palestinian related, ‘Trying these days to enter Jerusalem on special holy days is like being treating like animals…you go via cage-like areas with cameras and show your identification…it’s really awful’. Apart from the daily humiliations of life under occupation, the joyous and spiritual occasion of pilgrimage has become a source of stress rather than relief for the Palestinian Christians.

This makes the staggering demographic decline of the Palestinian Christian community understandable, if not tragic. Faced with the difficulties of pilgrimage, Palestinian Christians seek refuge in their local churches and communities. However, the now frequent ‘price tag’ attacks have made local parishes targets as well. Whilst the radical Israeli settler movement represents but a small fraction of Israeli public opinion, complacency towards these attacks, and towards the unequal treatment of Palestinians, both in Israel and in the Occupied Territories, highlights the failure of the Israeli authorities to properly address a situation in which minority groups are made to feel afraid, agitated and discriminated against.

According to a 2013 investigation by Ynet, of the 788 reported ‘price tag’ cases from 2012-2013, only 276 arrests have been made.  Of these arrests only 154 have been brought up on charges. Perhaps the most striking aspect of these attacks is how little they are reported in the international media. However, just as racism and religious discrimination have become almost universally unacceptable in the international community, so too should the international community urge all states – rogue or not –  to prosecute its citizens for carrying out such hate crimes. States of emergency, military occupation, terrorism, existential threats, etc. are no excuse for ‘turning a blind eye’.

Below is an incomplete list of anti-Christian ‘price tag’ attacks from 2012-2014 and translations of the Hebrew graffiti. (There were dozens more)

September 2012: Cistercian (Trappist) Monastery in Latrun tagged with the words, ‘Jesus is a monkey’, and set on fire.

October 2012: St George Romanian Orthodox Church in Jerusalem tagged with the words, ‘Jesus is a bastard’, with significant damage to the front door and rubbish placed around the entrance.

February 2012: Narkis Street Baptist Congregation in Jerusalem tagged with the words, ‘Jesus is dead’, ‘Death to Christianity’, ‘Mary was a prostitute’.

May 2013: Dormition Abbey on Mt Zion (tagged twice in a few months) with the words, ‘Jesus, son of a bitch, price tag’; ‘Jesus is a monkey’.

March 2014: Deir Rafat Monastery tagged with the words, ‘Jesus is an ape and Mary is a cow’, ‘America is Nazi Germany’ and ‘Price to pay for the peace agreement’.

April 2014: Attack on the Christian majority village of Jish. Cars smashed and tagged with the words, ‘Only goys [non-Jews] can be driven out of our land’.

Quinn Coffey is a PhD candidate in the School of International Relations at the University of St Andrews. He received his Master’s degree in Near and Middle Eastern Studies from the School of Oriental and African Studies in 2011. Quinn’s research focuses on the effects of the state building process on minority identity in Palestine, with a specific focus on the Palestinian Christian communities. His research also deals more broadly with theories of nationalism, minorities in the Middle East, the role of education in nation building, and the nationalism of stateless groups. Find him on Twitter @quinnpcoffey