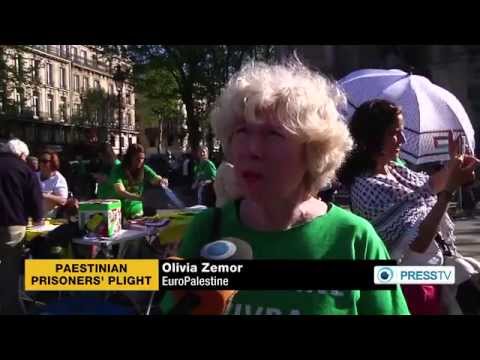 As talks between Israel and Palestine falter, thousands of Palestinians demonstrated Thursday on behalf of nearly 5,000 Palestinians imprisoned by Israeli Occupation authorities in 22 Israeli jails, many of them arbitrarily. They include 184 minors and 175 persons being held without any due process.

Many prisoners are subject to “moderate physical pressure,” solitary confinement or on bans from being visited by their families. Some 1400 of the Palestinian prisoners are ill.

The Israeli military routinely arrests Palestinians for peaceably protesting the theft of their land, water and other resources by illegal Israeli squatters. Often they take away minors, and sometimes they haul off the parents without any regard for what will happen to their small children. The 1949 Geneva Convention on the treatment of people in occupied territories forbids the Occupying power from expropriating locals and from flooding its own population into the Occupied territories.

Some 30 Palestinians are still being held in Israeli prisons since before the Oslo Peace Accords of 1993. As part of those accords, Israel had committed to releasing them, but it never has. Palestinians made it a requirement of their participation in the current round of talks (which began last August) that Israel finally abide by this commitment. Israel did release some 78 of these long-term prisoners, but declined to let the last batch go. As a result, Palestine signed the Geneva Conventions and other UN human rights treaties and instruments, a step preparatory to going to the International Criminal Court over Israel’s systematic war crimes in the Occupied Territories. That step in turn caused the talks to collapse. Sec. of State John Kerry blamed Israeli continued squatting activity along with the reneging on the prisoner release for the faltering of negotiations.

Some 4/5s of the Palestinian prisoners in Israeli jails are from the West Bank. Only 9% or so are from the Gaza Strip.

Since 1967, when Israel seized the West Bank and Gaza, some 800,000 Palestinians have circulated through Israeli jails, about 13,000 of them women.

Thursday’s protests were also held abroad, including in Argentina, where there is a large Arab immigrant population.