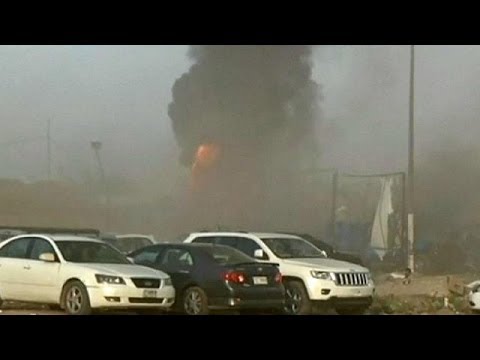 Euronews film clip: “Three explosions in Baghdad have killed dozens of people as they were leaving an election rally in the east of the capital.

A roadside bomb blew up near the gate outside the meeting. Followed by a suicide car bomb after a few minutes. Then a third explosion.

A Sunni jihadist group [the Islamic State of Iraq and Syria] has claimed responsibility.

Iraqi national elections are due to take place in less than a week on April 30.

Campaigning for Iraq’s general election, due to be held next week, started on April 1. However on the streets of Baghdad posters are still being put up and some candidates appear to only just have started campaigning. Reasons for the ongoing activity and the delays include bad weather, religious omens and gangs of vandals, paid to roam the city streets tearing down one lot of posters, so they can put up another.

Wandering the streets of Baghdad this week, it was still possible to see workers on the streets, bustling about, putting up election posters and banners. Even though campaigning officially began on April 1, in some areas of Baghdad it feels as though it only just started.

So why are they there? The city’s late starting candidates have given a variety of reasons and these range from bad weather to religious preferences.

“Our election campaign starts every day, very early in the morning,” jokes one of the workers helping a crew put up posters; Ali is in his 50s and works as a driver – he ferries a crew of young, unemployed men around the wealthier neighbourhoods of Karrada and Sadoun as they put up pictures of one of the most senior politicians running for re-election this month.

“I started working on the election on the first day of campaigning,” Ali says, as he helps one of the younger men fasten a poster. “We made a deal with the owner of a print shop to work every day, putting up posters. We’ll be finished this coming Sunday, a day before the special vote.”

The posters that Ali and his colleagues are putting up are new and glossy. Many of the posters put up previously don’t look quite so good. After the start of campaigning in Baghdad, the city went through a period of changeable weather, with rain and strong winds. A lot of the posters that had already been put up were blown around, torn or soaked. Which is why some of the candidates are starting over, re-posting their campaign materials around town.

However it’s not just inclement weather that has kept Ali and his crew and others like them busy.

“This year April 20th is considered a fortuitous date in the Islamic calendar,” explains one candidate, Abdul Qader Mulla. “And although it’s not official, a lot of people follow the Islamic calendar and they believe these days are blessed because they’re mentioned in the Koran.”

Finances are another reason why some would-be parliamentarians have started their campaigns late. “It’s not really fair,” complains Taha Hassan, another candidate in Baghdad. “You can’t really compare a candidate with a modest election budget who has to start their campaign late with one who has billions of dinars to spend. Despite the fact that Iraqi voters tend not to re-elect the candidates already in government, it’s still not fair.”

Meanwhile the crews of placard posters have their work cut out for them in Baghdad’s Jamiah neighbourhood. Dozens of campaign posters are on the ground here, torn and scattered around the streets.

“When it gets dark gangs of young people come here and they tear up the posters that are already up and replace them with new ones,” Omar, the owner of a vegetable store in one of the main streets, told NIQASH. “We have become used to this but we do suffer: Our streets are filled with rubbish,” he exclaims.

Among the posters scattered around are those featuring Saad al-Matlabi, who is currently an MP and a member of Iraqi Prime Minister Nouri al-Maliki’s ruling coalition.

“The fact that my posters – and posters belonging to other members of the State of Law coalition – have been torn up and thrown around is part of a campaign against us,” al-Matlabi told NIQASH. “That’s why we are intensifying our campaigning over these weeks – in order to compensate for our losses and to show those who are behind this campaign, that they will not have any impact on us.”