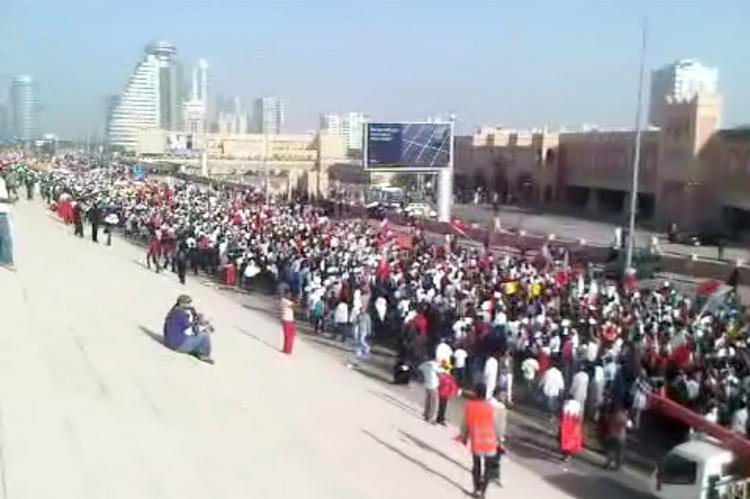 “A police officer in Bahrain who kills a protester in cold blood or beats a detainee to death might face a sentence of six months or maybe two years, while peacefully calling for the country to become a republic will get you life in prison,” said Joe Stork, deputy Middle East director at Human Rights Watch. “Bahrain’s problem is not a dysfunctional justice system, but rather a highly functional injustice system.”

The report, based on written verdicts and other court documents, reveals the stark contrast between prosecutions of serious human rights violations by security personnel on the one hand and prosecutions for “crimes” based on speech and peaceful assembly-related activities on the other.

The report sharply contests UK Foreign Office claims that Bahrain has implemented the Commission of Inquiry’s key recommendations and is moving forward on judicial reform.

The Commission of Inquiry report, the work of five respected international jurists, found that security forces were responsible for more than a dozen unlawful killings and routine excessive use of force in suppressing pro-democracy demonstrations in February through April 2011. It also found that detainees were subjected to “a deliberate practice of mistreatment” that led to at least five deaths in detention.

The report recommended that the government release from prison and void the convictions of “all persons charged with offences involving political expression, not consisting of advocacy of violence.” The report also recommended criminal investigations into the wrongful deaths of at least 18 demonstrators and detainees with a view to holding senior officials accountable for rights violations.

Two years after the report was issued, however, leaders of the 2011 protests remain in prison, some sentenced for life, and judges are convicting new defendants of “crimes” based solely on the expression of dissenting political views or the exercise of the right to peaceful assembly, Human Rights Watch said. To justify its decision upholding the terrorism convictions of the protest leaders, the Supreme Appellate Court held in September 2012 that terrorism need not involve the use or threat of violence but can be the result of “moral pressure.”

The few prosecutions of security personnel implicated in serious abuses have focused almost exclusively on low-ranking officers, and even those have resulted in acquittals or disproportionately light sentences. The officers responsible for beating suspected protester Ali Saqer to death were convicted of the lesser charge of assault rather than murder although a medical report submitted at the trial stated that Saqer had “blunt-force contusions” all over his body. An appeals court subsequently reduced the ten-year prison terms to two years, finding somewhat incredibly that the defendants deserved “clemency” on the ground that they had been “preserving the life of detainees, among them the victim.”

In another case, a trial court concluded that a police officer had shot Hani Abd al-Aziz Juma from a meter away, leaving him fatally wounded. But it found the officer guilty only of assault, stating that he had not acted with intent to kill. An appeals court subsequently reduced the seven-year prison sentence to six months.

Bahrain’s allies in London, Washington, and Brussels have failed to press the government of Bahrain to take serious steps to hold security forces accountable for abuse, or to call openly for the release of high-profile political prisoners. The UK Foreign Office, in its annual report on human rights published in April, highlighted judicial reform in Bahrain as an area where “the overall trajectory on human rights will be positive.”

“Something is seriously amiss when calling for a republic gets you a life sentence while shooting and killing an unarmed protester gets you six months,” Stork said. “Stability and reform will remain out of reach in Bahrain as long as its allies, notably the UK, offer uncritical support in the face of mounting evidence of abuses.”