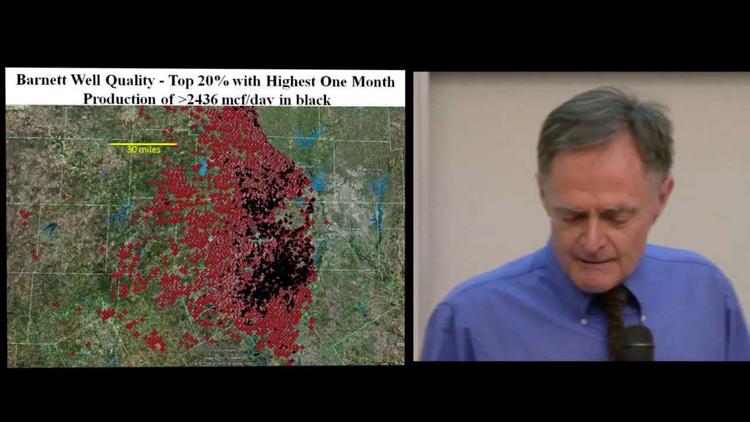 In 2011, the Energy Information Administration (EIA) of the US Department of Energy commissioned INTEK Inc., a Virginia-based consulting firm, to estimate how much oil might be recoverable from California’s vast Monterey Shale formation. Production of tight oil was soaring in North Dakota and south Texas, and small, risk-friendly drilling companies were making salivating noises (within earshot of potential investors) about the potential for an even bigger bonanza in the Golden State.

INTEK obliged with a somewhat opaque report (apparently based on oil company investor presentations) suggesting that the Monterey might yield 15.4 billion barrels—64 percent of the total estimated tight oil reserves of the lower 48 states. The EIA published this number as its own, and the University of Southern California then went on to use the 15.4 billion barrel figure as the basis for an economic study, claiming that California could look forward to 2.8 million additional jobs by 2020 and $24.6 billion per year in additional tax revenues if the Monterey reserves were “developed” (i.e., liquidated as quickly as possible).

We at Santa Rosa-based Post Carbon Institute took a skeptical view of both the EIA/INTEK and USC reports. In 2013, PCI Fellow David Hughes produced an in-depth study (and a report co-published by PCI and Physicians Scientists & Engineers for Healthy Energy) that examined the geology of the Monterey Shale and the status of current oil production projects there. Hughes found that the Monterey differs in several key respects from tight oil deposits in North Dakota and Texas, and that currently producing hydrofractured wells in the formation show much lower productivity than assumed in the EIA/INTEK report. Hughes concluded that “Californians would be well advised to avoid thinking of the Monterey Shale as a panacea for the State’s economic and energy concerns.”

On May 21 the Los Angeles Times reported that “Federal energy authorities have slashed by 96% the estimated amount of recoverable oil buried in California’s vast Monterey Shale deposits, deflating its potential as a national ‘black gold mine’ of petroleum.” The EIA had already downgraded its technically recoverable reserves estimate for the Monterey from 15.4 to 13.7 billion barrels; now it was reducing the number to a paltry 0.6 billion barrels.

What happened to all those billions of barrels of oil? Of course, the resource is still there. The Los Angeles Times article quotes Tupper Hull, spokesman for the Western States Petroleum Association, as responding, “We have a lot of confidence in the intelligence and skill of our engineers and geologists to find ways to adapt. . . . As the technologies change, the production rates could also change dramatically.”

However, technology comes with costs. The current tight oil boom in North Dakota and Texas would not have happened absent the context of historically high oil prices. But even with oil at $100 per barrel, the EIA now thinks only a very small portion of the Monterey formation’s oil resources can be produced profitably. Maybe with oil at $150 or $200 per barrel that percentage would change. But how high an oil price can the American economy bear before it falls into recession? Evidence suggests that $100 per barrel oil is already acting as a brake on economic expansion.

The new EIA estimate is a welcome note of realism in a California energy discussion that had veered into hyperbole and wishful thinking. Can we now begin a reasoned discussion about our energy future? It’s late in the game, but better late than never.

Richard Heinberg is a senior fellow at the Post Carbon Institute and the author of eleven books, most recently Snake Oil: How Fracking's False Promise of Plenty Imperils Our Future. Previous books include The Party’s Over: Oil, War, and the Fate of Industrial Societies, Peak Everything: Waking Up to the Century of Declines, and The End of Growth: Adapting to Our New Economic Reality.