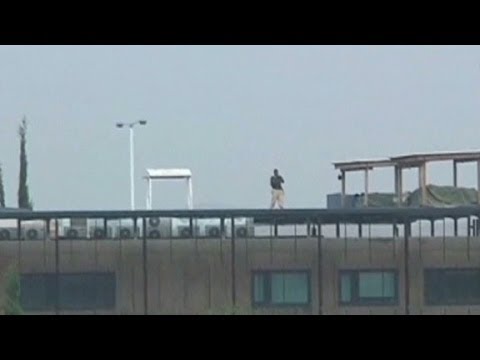 As Yemen enters the post-National Dialogue Conference period, theory and practice are colliding; the constitutional referendum will take place in June followed by hopefully credible presidential and parliamentary elections.

The promise of a “new” Yemen will be debated formally through the ballot box and the people will decide the future leadership of their country. Fundamental to any statehood is sovereignty. For Yemen, this means the government must own a monopoly on the use of force within the country’s border in order to provide services and insure safety and security for Yemenis. Government assures the process of checks and balances, upholds the idea of human dignity and ensures the rights of individuals; minorities and majorities alike. Al-Qaeda on the Arabian Peninsula (AQAP) want a future for Yemen that is not what the majority of Yeminis want. The fight against AQAP is one of survival.

Yemen is by and large a peaceful Muslim country that does not need nor want AQAP’s violent extremism. The fight against al-Qaeda militants in the Abyan and Shabwa provinces, and also the very recent counterterrorism operations following attacks against the Presidential Palace in Sana’a, is the government’s attempt to counter the AQAP insurgency threat. Not only are AQAP militants trying to control Yemen militarily, they are also fighting to retain ungoverned spaces where they can operate freely. AQAP needs space to operate and mount operations in Yemen and elsewhere. Yemen’s recent transition and fragmentation has provided an ideal opportunity for AQAP to create these spaces from within which to operate.

Now the Yemeni army is acting. In many ways it has become a violent ideological duel to the death. Many Yemeni soldiers have died and many more will be killed in this long bloody conflict. Their sacrifice is necessary if Yemen is ever to emerge from its current security predicament. Also, Yemen’s government will need to confront endemic poverty and resource scarcity if Yemen is to secure a place in the world where at present it is more akin to sub-Saharan Africa countries than those of the Arabian Peninsula. If Yemen’s military fails, Yemen fails.

But the government’s task is complex. Up to 70% of AQAP’s fighters are not Yemeni. Some have argued that Yemen is merely a new battlefield for the ongoing Western clash with Al-Qaeda, played out in Yemen and that if the government prevails, with Western backing, the jihadists will simply find somewhere else to fight. Included in AQAP’s mercenary ranks are many foreigners including some British Islamists. Some argue the presence of AQAP is a result of spoilers from within Yemen’s government who envision that a destabilized Yemen will allow them to gain and/or regain political leverage.

All these issues are coming to roost in the Abyan and Shabwa Provinces, and in Yemen’s capital, Sana’a, right now.

But not all those who fight against the Government share the same beliefs as AQAP leadership. Some just fight because AQAP provides employment and status, which for Yemen’s large unemployed youth bulge, is a ready alternative to poverty and they are seeking a better life, no matter the method. These fighters’ souls have not been captured by the AQAP’ narrative and they can be turned around. But it will require a continued military campaign to secure them and then a period of sustained presence providing services to win back the hearts and minds of the Yemeni people from AQAP.

Once AQAP is countered, as we are sure at some stage it will be, conditions are set for Yemen to come out of the darkness. AQAP has not only infiltrated Yemen it has also mounted attacks against the US which while not as kinetic in outcome as the September 11 tragedy, pose an equal threat to global security. Underwear bombers and the printer cartridge bombs have placed Yemen at the bottom of the list of countries able to secure their borders. While this has attracted US funding for counterterrorism operations, it has also prevented the government from unifying the country. With AQAP gone, which will be a global benefit as much as it will benefit Yemen, the government can focus on other essential programs including economic and educational development to create jobs, implementing programs to end poverty and developing resource exploration to counter dwindling oil flows. Without AQAP, Yemen will be able to stand up internationally, maybe even join the GCC, and not be prevented from exploring economic opportunities.

Now is the time for Yemen to step up. Now is the time for Yemen to fight for a better future and to secure its own lands for the children who deserve better. It is a fight that is both necessary and that must be won. It may not be convenient nor conventional in its ending and the ideology of the insurgency may have to be repelled for years to come, but at least the people of Yemen can rally behind a common flag and feel that being Yemeni is worth the fight. The people of Yemen need to stand beside their military heroes as they fight for the survival of Yemen.

Robert (Bob) Sharp is an associate professor on the faculty of the Near East South Asia Center for Strategic Studies (NESA). A former British Army Colonel he retired in 2006 and emigrated to the U.S.

CNN: “Serious terror threat against the U.S. embassy in Yemen”