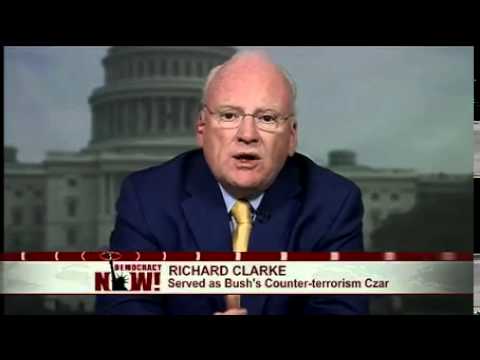 Amy Goodman: “Do you think President Bush should be brought up on war crimes [charges], and Vice President Cheney and [Defense Secretary] Donald Rumsfeld, for the attack on Iraq?”

Richard Clarke: “I think things that they authorized probably fall within the area of war crimes. Whether that would be productive or not, I think, is a discussion we could all have. But we have established procedures now with the International Criminal Court in The Hague, where people who take actions as serving presidents or prime ministers of countries have been indicted and have been tried. So the precedent is there to do that sort of thing. And I think we need to ask ourselves whether or not it would be useful to do that in the case of members of the Bush administration. It’s clear that things that the Bush administration did — in my mind, at least, it’s clear that some of the things they did were war crimes.”

There has been a rash of such statements by former Bush officials. As Liberaland noted, Lawrence Wilkerson also characterizes the administration in this way, and says he regrets that the GOP focuses on Benghazi rather than 8 years of crimes:

Retired. U.S. Army Colonel Lawrence Wilkerson is ashamed of his party. Wilkerson asserted that embassy security went underfunded, and that security at diplomatic facilities would be better if the Congress followed the recommendations of committee convened…