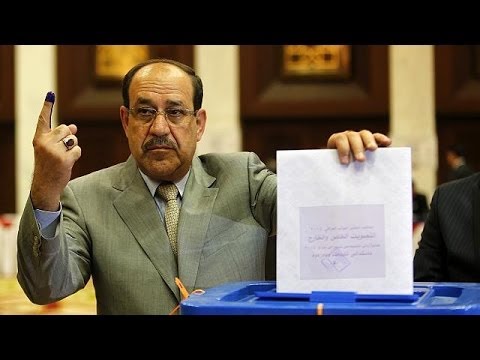 The results of the Iraqi parliamentary elections are in, and everybody lost. There will be another hung parliament that gets almost nothing done. The Sunni Arabs ended up dividing their vote and doing poorly. The Shiites likewise are deeply divided. Prime Minister Nouri al-Maliki’s party did best, positioning him for a third term. That isn’t a foregone conclusion, because he needs to put together a coalition that will give him 51% of the 328-seat parliament (i.e. 165). His party gained only 92 seats. But anyway al-Maliki isn’t what Iraqi needs. He has been bad at reaching out to Sunni Arabs (though to be fair he has deployed the new Iraqi Army and security forces to establish order and cut militias down to size in the Shiite South).

The electoral system designed for Iraq by the US and the United Nations was never very good, and by now it is broken altogether. The country’s 15 provinces and one Kurdistan super-province are the equivalent of districts. But Iraq’s provinces tend to be heavily populated by a particular linguistic or religious ethnic group. Thus, Najaf Province (about a million people) is almost entirely Shiite and everyone speaks Arabic (a Semitic language related to Hebrew). Dohuk, Suleimania and Irbil, which have joined to form Kurdistan, are almost entirely Kurdish (Kurds speak an Indo-European language ultimately related to English and have their own form of Sunni Islam, though there are some religious minorities among them).

The system therefore is doomed to produce ethnic blocs in parliament– Shiite, Sunni Arab and Kurdish. None of them really gets along with the other, guaranteeing gridlock. Indeed, even the major Shiite factions don’t get along. The Shiites can always rule if they remain united with one another. Therefore, the Sunni Arabs can count on being outvoted on every issue from here to eternity, which many now realize; they are increasingly ticked off about it.

So Nouri Al-Maliki, the prime minister, heads the Shiite Islamic Mission Party (al-Da`wa al-Islamiya), founded around 1957 — the oldest fundamentalist civil party aiming for an Islamic state in the Muslim world. (Egypt’s Muslim Brotherhood is older, but it was a cadre organization, not a civil party). Since 2005, Iraq has always had a prime minister from the Islamic Mission Party and in some ways ensconcing this party in power is the major political achievement of the Bush administration in Iraq.

The Islamic Mission Party is in coalition with some independents and other small groups, forming a coalition called the State of Law (as in, ‘Iraq is a state of laws and not men.’)

The State of Law received 92 seats out of the 328 or 28%. (It won 10 of the country’s 18 provinces). Al-Maliki needs to find partners to make up the other 73 he needs at a minimum. This is what the UK’s David Cameron had to do in 2010, when he allied with the Liberal Democrats because his Conservative Party had not gotten a majority.

In 2010 in Iraq, al-Maliki had a great deal of difficulty forming a government (that time he got 88 seats). His natural partners are the other Shiite parties, but they have conceived a deep dislike of him, seeing him as grasping and dictatorial.

The Citizens Party of Ammar al-Hakim received 29 seats, down somewhat from 2010. This group used to be the Supreme Council for Islamic Revolution in Iraq and then the Islamic Supreme Council of Iraq. It was formed in Iran among Iraqi expatriates in 1984 and originally had Khomeinist tendencies (believing that clerics should rule). It has moved more toward a democratic point of view but is still more clerically dominated than the lay Islamic Mission Party of al-Maliki. In 2010 Iran appears to have asked al-Hakim to support al-Maliki, and he acquiesced.

The Liberty Party of cleric Muqtada al-Sadr got 28 seats, and two tiny pro-Sadr parties got another 6, for 34 for this tendency. Al-Sadr has broken with al-Maliki and denounced him as dictatorial, and supported Sunni fundamentalists opposing al-Maliki. In 2010 Iran strong-armed al-Sadr into supporting al-Maliki.

Al-Sadr and al-Hakim had been in coalition in the last election, in 2010, and had gained somewhat more seats that year. Now they have 63.

Even if al-Maliki could pull off a miracle and get both al-Sadr and al-Hakim to support him, that is only 63 of the 73 he needs. In 2010, al-Maliki was put over the top by the support of the Kurdistan Alliance, which may happen again this time. The Kurds are in competition with Sunni Arabs for control of Kirkuk and influence in Mosul and in Diyala Province. Many Iraqi Sunnis support the uprising in Syria, which has come to be dominated on the battlefield by al-Qaeda affiliates. Kurds in Syria have fought the extremist fundamentalists and are supported by Iraqi Kurds.

The Patriotic Union of Kurdistan of Jalal Talabani (president of Iraq) got 19 seats; the Kurdistan Democratic Party of Massoud Barzani also got 19; and the Movement for Change (Goran) got 9. So the Kurds altogether won 47 seats.

Long story short, the Kurdish parties are unlikely to support a Sunni party, and although Barzani in particular is done out with al-Maliki, are far more likely to ally with the Shiites. Whether that means backing al-Maliki for prime minister, it is too soon to tell. Before the election Massoud Barzani met with Allawi, allegedly to strategize how to move al-Maliki out.

The Sunnis had largely supported the secular Iraqiya Party in 2010, which got 92 seats and was the largest in parliament. But the Iraqiya’s leader Ayad Allawi just could not put together a majority coalition. Many Iraqi Sunnis felt cheated, but they just don’t understand how parliamentary systems work. Unless you get a majority, you need coalition partners to rule. With the Kurds in tension with Sunni Arabs, and Sunni-Shiite tensions high, the Sunnis have found themselves isolated in national politics.

This time the Sunni Arabs split their votes among three major parties. Allawi’s party is now al-`Iraqiya al-Wataniya or the Iraqi Nationalism Party. It got 21 seats. The Speaker of the Parliament runs a party called the United (al-Muttahadun), which received 23 seats. And deputy pm Saleh al-Mutlaq headed al-Arabiya, the Arab Party, with 10 seats.

So the Sunni Arabs got at least 54 seats this time. But their ability and willingness to go to the polls was lessened by the crisis in Falluja and Ramadi since January, where the terrorist group the Islamic State of Iraq and the Levant has taken over many neighborhoods.

The Sunni Arabs of Iraq since early 2011 have mounted their own “Spring,” though without much success. The rallies are either crushed by the state or disrupted by Iraqis of a more extremist bent.

The gradual loss of any hope among Sunni Arab Iraqis in the new parliamentary system is heartbreaking. Now entire cities in their regions are under al-Qaeda. Al-Maliki can’t or won’t reach out to them. 3200 people have been killed in Iraq since January. That looks set to continue and accelerate.