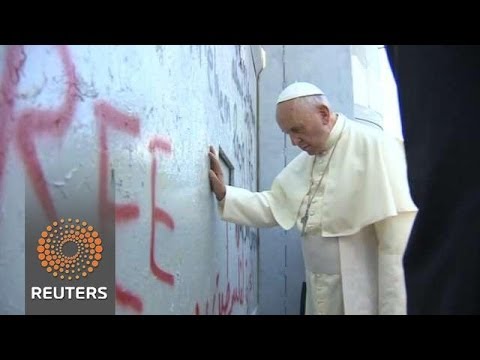 On Sunday in Bethlehem, Pope Francis called for recognition of an independent Palestinian state. CNN reports that he asked for “the acknowledgment by all of the right of two states to exist and to live in peace and security within internationally recognized borders.”

As the AFP piece below makes clear, Pope Francis’s unscheduled stop at what Palestinians call the Apartheid Wall seemed to be an acknowledgment of the ways in which the structure has further cut Palestinians off from one another, strangled the economy of Bethlehem, and detached further land from the Palestinian West Bank. CNN reported that Mustafa Barghouti, general secretary of the Palestine National Initiative, told its correspondent, “The Pope did not only put his hand on a concrete wall. He put his hand on occupation. He put his hand on (an) apartheid system, on a system of separation, and discrimination, and oppression.”

Thousands of cheering Catholic pilgrims welcomed Pope Francis to Manger Square in the West Bank city of Bethlehem on Sunday, where the pontiff celebrated mass. Francis rolled into the square standing in a white open jeep, as local Christians, and others…