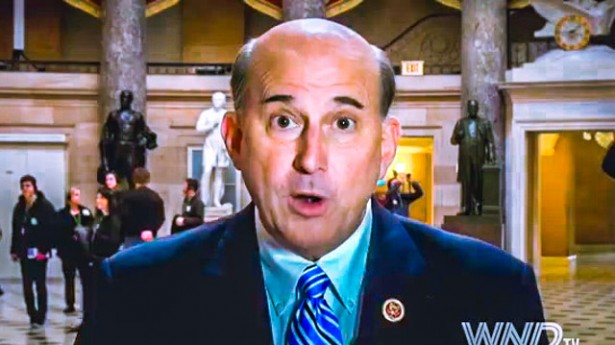 Louie Gohmert: Constitution only protects Americans who ‘cling to God and guns’ (via Raw Story )

Rep. Louie Gohmert (R-TX) recently asserted that the U.S. Constitution only applied to people “who cling to their God and their guns.” Speaking at a rally in Iowa for Republican Senate candidate Sam Clovis on Friday, Gohmert recalled that he had…

By the way, Gohmert’s assertion is drawn from John Adams: “Our Constitution was made only for a moral and religious people. It is wholly inadequate to the government of any other.” But he misunderstands what Adams, a Unitarian and possibly an unbeliever, was saying, which was that the constitution is a secular document which could easily be subverted by a rogue citizenry, and so a moral public is necessary to its good functioning. He wasn’t praising fundamentalist Christianity or saying the constitution is rooted in the latter–in fact the opposite. -JC

The full quote is

““But should the people of American once become capable of that deep simulation towards one another, and towards foreign nations, which assumes the language of justice and moderation, while it is practising iniquity and extravagance, and displays in the most captivating manner the charming pictures of candour, frankness, and sincerity, while it is rioting in the rapine and insolence, this country will be the most miserable habitation in the world. Because we have no government armed with the power capable of contending with human passions unbridled by morality and religion. Avarice, ambition, revenge, and licentiousness would break the strongest cords of our Constitution, as a whale goes through a net. our Constitution was made only for a moral and religious people. It is wholly inadequate to the government of any other.” _ John Adams: Signer of the Declaration of Independence; One of Two Signers of the Bill of Rights; Second President of the United States.”

It is discussed here.