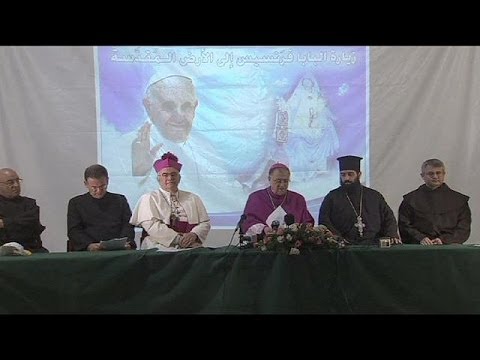 The Latin Patriarch in Jerusalem, Fouad Twal, has said that Israeli squatter attacks on and desecration of Christian churches has poisoned the atmosphere in advance of Pope Francis’s planned visit to Jerusalem.

Suspected Israeli extremist squatters have committed 24 acts of vandalism against Jerusalem churches in the past year, many of them in just the last month. One graffito scrawled in Hebrew on the wall of the Assembly of Bishops at the Notre Dame Center in East Jerusalem included a death threat.

Pope Francis will visit the Notre Dame Center, where the death threat was written, during his trip later in May.

Twal said that the attacks are certainly a source of anxiety for all moderates.

The US State Department has begun classifying ‘price tag’ attacks by Israeli squatters as a form of terrorism.

The Arabic press openly uses the words “terrorism” and “racism” to describe the Israeli vandalism.

Although Israeli officials have pledged action to stop the attacks, so far those pledges have been largely empty and Twal says he can’t trust them until they are implemented. Those price tag vandals arrested in the West Bank have often been freed by the Israeli courts.

Hundreds of Israeli squatters are suspected of being involved in the attempt to terrorize Christian Palestinians, including followers of race-baiting American-born Rabbi Yitzchak Ginsburg and members of the Kach racist group founded by extremist Meir Kahane. Many of the Ginsburg followers involved in the attacks live in the squatter settlement of Yitzhar near Ramallah in the Palestinian West Bank. Two of Ginsburg’s colleagues have urged the killing of Palestinian babies because they will, allegedly, grow up to hate Jews.