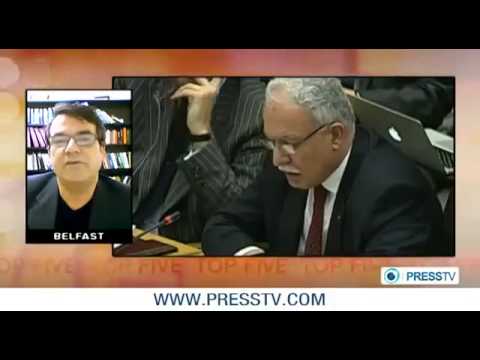 In a letter to Palestinian President Mahmoud Abbas, the groups said that providing the ICC with jurisdiction could give victims of war crimes and crimes against humanity committed by any party on or from Palestinian territory access to international justice and send a message that such crimes cannot be committed with impunity. Abbas is under pressure not to do so primarily from Israel and the United States. Some ICC member states, including the UK and France, have opposed such a move because, they say, it would undermine Israeli-Palestinian final status negotiations.

“The argument that Palestine should forego the ICC because it would harm peace talks rings hollow when 20 years of talks have brought neither peace nor justice to victims of war crimes,” said Joe Stork, deputy Middle East director at Human Rights Watch. “People who want to end the lack of accountability in Palestine and deter future abuse should urge President Abbas to seek access to the ICC.”

The ICC’s jurisdiction would cover serious crimes under international law committed on or from Palestinian territory, such as torture and indiscriminate attacks on civilians, whether committed by Palestinian authorities or armed groups or the Israeli military.

The ICC’s statute also classifies as a war crime the “direct or indirect” transfer of civilians by an occupying power into occupied territory – a category that would include the Israeli government’s facilitation of the transfer of its citizens into settlements. Another war crime under the statute is the “forcible transfer” of protected people in an occupied territory – in this case Palestinians – off their lands, such as by demolishing their homes and preventing them from returning.
Since Benjamin Netanyahu became Israel’s prime minister in 2009, Israel has begun construction on more than 9,480 settlement homes. Israeli demolitions during the same period left more than 4,600 Palestinians homeless. Both trends accelerated in 2013: 2,534 settlement housing starts in 2013 represented an increase of more than 220 percent over 2012, and demolitions that left 1,103 Palestinians homeless were up by almost 25 percent.
In February 2014, the International Committee for the Red Cross stopped delivering emergency shelters to Palestinians in the Jordan Valley, whose homes the Israeli military had demolished, because the Israeli military repeatedly confiscated or demolished the shelters.

Palestine could request the ICC’s jurisdiction by acceding to the court’s Rome Statute, in which case the court could exercise jurisdiction after the accession took effect. In addition, Palestine could submit a declaration accepting the court’s jurisdiction starting from any date since the ICC treaty entered into force in 2002.
Palestinian officials submitted a declaration recognizing the ICC’s jurisdiction in January 2009, but the Office of the Prosecutor later determined that the declaration “was not validly lodged” because of Palestine’s unclear status as a state at the time. Now that the UN General Assembly has upgraded Palestine to non-member state observer status, in November 2012, the ICC prosecutor has said that “the ball is now in the court of Palestine” to seek the ICC’s jurisdiction.
Abbas had pledged not to seek the ICC’s jurisdiction over Palestinian territory during nine months of US-brokered final status negotiations with Israel, which ended on April 29. On April 2, Palestine acceded to 20 international treaties and conventions, most relating to human rights and the laws of war, but not the ICC statute. In a vote on April 27, the Palestine Liberation Organization’s central council approved a list of dozens of other international treaties and bodies for future Palestinian accession, including the ICC, the Wall Street Journal reported.
“The US, Israel and others who are pressuring Palestine not to seek the ICC’s jurisdiction cannot credibly argue that continued impunity for serious international crimes will help bring the conflict to an end,” Stork said.  “We call on Abbas to go to the ICC precisely because giving it a mandate in Palestine would send a much-needed message that grave crimes will have serious consequences.”
The letter was signed by:
Addameer Prisoner Support and Human Rights Association
Al Dameer Association for Human Rights
Al-Haq
Al Mezan Center for Human Rights
Al-Quds University Human Rights Clinic

“Palestine has right to sue Israel at ICC”