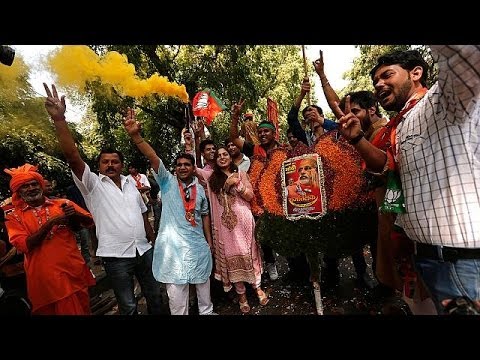 The victory of the Bharatiya Janata Party (BJP) in India’s elections is being hailed in some Western media as a hopeful sign for US-Indian trade and for Indian business. But like the US Tea Party movement, it is rent by internal contradictions that could derail such aspirations. The BJP has many resemblances to the American Tea Party movement. It is xenophobic (especially disliking Muslims). It is imbued by religious fundamentalism and often anti-science. It is hawkish in foreign policy. It is an advocate for the business classes and critical of government programs. Despite the latter position, it may not be as good for the Indian business sector as many observers assume.

1. The Hindu Nationalism of the BJP is exclusivist and intolerant. Contemporary business requires a tolerant and cosmopolitan atmosphere. You want to maximize customers. American Tea Partiers hated Coca Cola’s Superbowl ad this year which showed “America the Beautiful” sung in Spanish as well as English. But Coca Cola walked off with more Latino customers. The Hindu Nationalists have conducted pogroms against Muslims (12 percent of the population) on several occasions, as well as against other religious minorities. What kind of business atmosphere is that creating– whether for investors or consumers? The new Prime Minister, Narendra Modi, himself has been on a US travel ban because as governor of Gujerat State he was felt to have done too little to halt one such pogrom. Sociologists of India have already found that when they sent in resumes applying for advertised jobs with Muslim names on them the turn-down rate was much higher than for those with Hindu names. This sort of discrimination is likely to get worse now.

2. Contemporary business success requires investment in science. The BJP is militantly against scientific findings that contradict its fundamentalist orthodoxies. It supports an indigenous form of homeopathic medicine over scientific medicine. Although it talks a good game about scientific innovation, it makes no pledges of increased government investment in real science and technology, which India desperately needs. Its energy policy is favorable to renewables, but is really more an “all of the above” approach that is not good for fighting global warming. Its attitude will stultify critical thought of a sort on which robust science depends. It maintains that Sanskrit developed in India rather than spreading into it from the north. It opposes the academic study of religion and its findings. Already, the books of Chicago Sanskritologist Wendy Doniger have been banned in India, and this sort of thing will now get worse.

3. Economic prosperity is hurt by concentration of wealth at the top of society. Because of the Congress Party’s redistributive policies, India is a much less unequal society than the US, and over 100 million people have been lifted out of poverty in the past decade. The BJP favors Neoliberal policies that will privatize institutions and favor market mechanisms. But these policies have resulted in vastly increased inequality wherever they have been implemented, hurting working and middle class purchasing power and creating a rootless business class that often turns abroad for investment and profits, abandoning the home country to stagnation and inequality.

4. Economic prosperity benefits from peace. The US economic crises of 1975-82 and 2008-present had a great deal to do with wars (Vietnam & Iraq). The last time the BJP was in power, it almost went to war with Muslim-majority Pakistan, coming close twice in 2002 alone. Since India and Pakistan are both nuclear states, such a war would have been a catastrophe of cosmic proportions. Although the current leadership of the party is less hawkish in foreign affairs and more focused on the domestic economy, it remains to be seen if the rank and file of angry Hindu fundamentalists can pressure the government to take a hard line with Islamabad.

5. Contrary to what many pundits assume, it is not clear that a fundamentalist nationalist party such as the BJP will be very welcoming to foreign capital. Because of its nationalism and ties to Indian small businessmen, the BJP is unlikely to substantially increase foreign investment, especially in the retail sector, where its leaders are talking about retaining relatively strict rules for foreign direct investment.

Many outsiders are celebrating the BJP victory because they assume that it will lead to better trade and economic relations between India and e.g. the US. They don’t seem to realize that India has just elected the equivalent of a Sarah Palin or Ted Cruz. It seems to me that the only question is whether the party, now that it is in power, will become more pragmatic and less intolerant just in order to rule. One dark cloud on that horizon is that it attained an absolute majority in parliament and so does not need more moderate coalition partners.