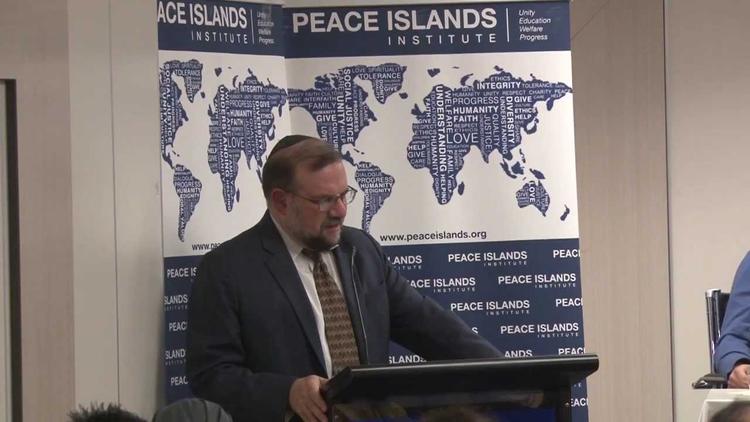 By Joseph Richard Preville via IslamiCommentary

Israeli-American businessman, scholar, and activist Rabbi Shai Har-El’s new book — Where Islam and Judaism Join Together: A Perspective on Reconciliation (Palgrave Macmillan, 2014) — is a powerful meditation on how Jews and Muslims can discover the path to reconciliation, especially in the turbulent Middle East. Har-El shows how that path is illuminated by centuries of common history, shared Abrahamic values, and the fundamental human desire for peace and harmony. He also notes how much work needs to be done on the long journey ahead.

A noted ambassador for peace and reconciliation between Jews and Muslims, Har-El is the founder and current president of the Chicago-based Middle East Peace Network (MEPN). He established this organization in 1990 to serve “as a catalyst for action in the battle for peace in the Middle East.” MEPN believes in “faith diplomacy” and the power of individuals and groups to create peace and to heal conflict though direct action and concrete initiatives.

Born in Israel, Rabbi Har-El was educated at Tel Aviv University and the University of Chicago, and was ordained a rabbi in 2012.
He currently serves as President/CEO of Har-El Financial Group, an American financial consulting firm he founded in 1981. He is also working with the Center for Middle Eastern Studies at the University of Chicago to launch a Jewish-Muslim Reconciliation Initiative.

Rabbi Har-El discusses his new book (which follows his 1995 monograph, Struggle for Dominion in the Middle East: The Ottoman-Mamluk War, 1485-1491) in this exclusive interview.

What inspired your passion for inter-religious dialogue and reconciliation between Jews and Muslims?

My human interactions with Muslims of all walks of life and my peace advocacy since the early 1990s, when I founded the Middle East Peace Network (MEPN), led me naturally to interfaith dialogue as an alternative peacemaking framework. I have always regarded religion as a critical, yet ignored, track for the resolution of the Arab-Israeli conflict. While some use religion as a political instrument to spread division and hatred, I believe religion is all about unity and tolerance. This premise has always been at the core of my interfaith encounters. My hope is that the book becomes a force strong enough to affect public opinion about the possibility of reconciliation between Islam and Judaism, and a sacred gateway, where readers of all nations can embark on a journey of exploration of other people’s cultures.

How did you come to choose Jerusalem’s “Gate of Mercy” as the framework for your book?

The Holy City of Jerusalem, which is considered highly sacred to both Jews and Muslims, is surrounded by ancient walls with eight gates that are opened and one that is closed. The one that is totally sealed by stone slabs is more beautiful than all the rest. Called the Golden Gate in Christian literature, it is known in both Jewish and Muslim traditions as the Gate of Mercy. This gate is special because of its double-entry structure and because it is more significant in size and ornamentation than the open gates. When visiting this place, one can see a distinct difference between the inside and the outside of the gate. It appears from the outside to be composed of two adjoining facades and crowned by twin arches of equal height and weight, but its interior is actually a unified structure built into the wall. So I thought perhaps this monumental gate sees what it represents—the special bond between Islam and Judaism. Like the Gate of Mercy, they are one faith from the inside made of two religions from the outside. Because of what it symbolizes, the Gate of Mercy is selected as the framework for this book.

How will your book help Jews and Muslims to appreciate all their shared bonds?

I wrote my book in a spirit of harmony and brotherhood. I treated it as a place, where I attempt to bridge between Islam and Judaism, and as a tool to promote a greater understanding and appreciation of these two Abrahamic traditions. The book is a sincere effort to go back to our sacred texts and reinterpret their teachings so that an open space is created to embrace religious pluralism and respect of other people’s truths. I chose to concentrate only on Islam and Judaism, sister religions that I believe are closely related to one another with roots intertwined in the land, in the language, and in the memories of shared history. The book demonstrates how, of all religions, they are by far the closest to each other in their fundamental religious tenets, practices and systems of law, and their social, cultural and ethical traditions.

Why is the reconciliation between Jews and Muslims critical to world peace?

I recognize the centrality of the Israeli-Palestinian conflict within the overall context of Jewish-Muslim relations. Most Muslim leaders still argue that as long as this conflict is not resolved, resolution for the Jewish-Muslim rift is impossible. I disagree. If anything, an historical rapprochement between these two religions can only help Israelis and Palestinians find peace together. The passions of religious antagonism between Islam and Judaism only aggravate the Middle East conflict. Nothing is more dangerous than turning this conflict into a war of beliefs and exporting it outside the boundaries of that region. I am convinced that Islam and Judaism can and must reconcile their terribly bitter and unholy differences; that this reconciliation would forward the cause of world peace, in general, and help defuse the Arab-Israeli conflict, an age-old hostility trigger in the Middle East, in particular. Especially nowadays, when the Muslim world and the West have been poised on the edge of an apocalyptic battle to defend their sacred “isms,” this reconciliation is not just possible, it is critical.

According to the recent Anti-Defamation League worldwide survey (ADL Global 100, May 13, 2014), anti-Semitism is the highest in the Middle East and North Africa? How can this problem be resolved?

This problem can be resolved through global peace education and reconciliation efforts. This is why I am also launching the Jewish-Muslim Reconciliation Initiative in partnership with the Center for Middle Eastern Studies at the University of Chicago, and in collaboration with universities throughout the Middle East. The purpose of this initiative is to dam the spread of animosity and anti-Semitism and build bridges of understanding and reconciliation instead. Essential to this initiative is building an international network of NGOs and enrolling intellectuals, scholars, community leaders, and political figures from both worlds. It would require us to wage a fierce battle for the minds and hearts of both Jews and Muslims and to fight the fanatics among us — those who manipulate religion and turn it into an instrument of hatred and violence — while supporting the voices of peace among us. We must reject all cultures of denial and allow infrastructures of mutual trust and reconciliation to be erected instead; cast aside exclusivist religious visions and violent passions and replace them with relationships marked by mutual human care and compassion; and combat the forces of chaos and darkness that divide people — creating for them peaceful ecology instead. Finally, we must condemn all senseless wanton acts of violence and engage in peace education in our schools, places of worship, and media networks so that our children and grandchildren live in a safe world and enjoy a brighter future.

Are you optimistic about a peaceful resolution between Israelis and Palestinians in the near future?

Yes, I am, but not in the near future. We must realize, once and for all, that the gap between the national narratives of the Israelis and Palestinians and the declarative positions of their governments are too wide to bridge and that their historical conflict is too fundamental and chronic to be resolved by diplomatic shortcuts and quick-fix solutions. At the root of this conflict is deep-seated distrust, suspicion, bitterness, and hostility that must be overcome first in order for future peace negotiations to succeed. In the Middle East, diplomacy has shown little promise. What we see is that, when diplomacy fails, the solution is more diplomacy. It is time we recognize the magnitude and complexity of the conflict and the evidenced limitations of traditional diplomacy. The only way for Israeli-Palestinian peace to be achieved is that it must shift from the so called “peace process” into a two-stage process: first, a public peacebuilding pre-negotiation and second, an intergovernmental peace-negotiation. The first stage will focus on a progressive implementation of peacebuilding processes leading to the final state of peace; an elaborate and systematic plan of action that mobilizes both Israeli and Palestinian societies to empower their own governments to go to the negotiating table and finalize a genuine peace agreement. In this warring region, “peace from above” and “peace from below” are needed in order for peace negotiations to succeed. That is also the mission of the Middle East Peace Network (MEPN) I have been leading.

Joseph Richard Preville is an American writer living in Nizwa, Oman. His work has appeared in The Christian Science Monitor, San Francisco Chronicle, Harvard Divinity Bulletin, Tikkun, The Jerusalem Post, Muscat Daily, and Saudi Gazette. He is also a regular contributor to ISLAMiCommentary.