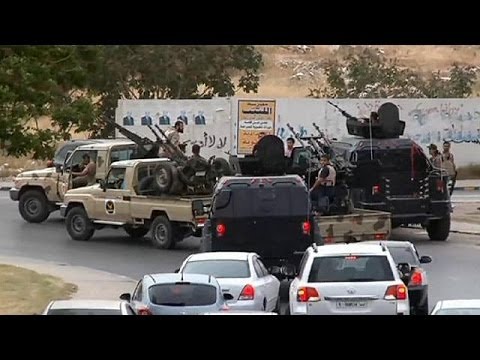 In Benghazi on Monday morning, fighting resumed between the “Libyan National Army” forces of Col. Khalifa Hifter and fundamentalist extremists. The latter fired rockets at the Benina military airport overnight, but caused no casualties. It was from this base that aircraft were flown on Friday against positions of the fundamentalists, by air force personnel who had joined Haftar’s movement. Gen. Muhammad Hijazi of the “Libyan National Army” gave an interview to al-Arabiya in which he maintained that the extremist militias were linked to the Muslim Brotherhood in Benghazi and that the officers were determined to crush both.

Journalists reporting from Libya such as Mary Fitzgerald are saying that Hifter’s move against the extremists is being well received. Even Aljazeera had a guest on who said that if Hifter hadn’t moved against Ansar al-Sharia, someone else would have, since the string of assassinations and bombings conducted by the extremists in Benghazi is unacceptable to the population.

According to al-Hayat, Hifter’s campaign began with an attack by his forces on the HQ of “The Ra’fu’llah al-Sahati Brigade” in the al-Hawari Distict of Benghazi, which had been softened up by artillery barrages. The attack left one of the Brigade members dead and three wounded. The Hifter forces received close air support from a MIG and a helicopter gunship that took off from the Benina Airport in Benghazi. Hifter announced that the operation aimed at “cleansing” Benghazi of “terrorist groups.” He advised civilians in some areas of the city to flee, which many did.

Late on Friday Hifter withdrew his troops from the city, but said it was tactical and that he would be back. Speaker of the House in Tripoli, Nouri Abusahmain accused Hifter of treason and Tripoli announced a no-fly zone over Benghazi. (Abusahmain is a Berber/ Amazigh from the west, but leans toward Muslim fundamentalism, as do many independents in the General National Assembly, and they have been increasingly able to put together a majority vote, having impeached Prime Minister Ali Zeidan (a nationalist and secularist). Abusahmain has been under the cloud of a “morals scandal” and apparently often out of the country.

Hifter denied the charges of treason and insisted his only goal is to wipe out the Muslim extremists.

Then on Sunday The secular Qaaqaa and Sawa’iq militias, linked to the city of Zintan but prominent in the capital, attacked the parliament building. Seven members of parliament were detained but ultimately released. Parliament has shifted from secular orientation to a slight majority for Muslim fundamentalists as independents joined the latter. This shift led to the dismissal of secular prime minister Ali Zeidan and his replacement by Abdullah al-Thinni. Al-Thinni himself was to be replaced later this week by the Muslim fundamentalist Ahmed Mitig.

A television station was also hit with RPG fire in Tripoli on Sunday.

The nationalist militias denied that they had joined Hifter’s “Libyan National Army.” (This, despite the numerous press reports, some of which I’m linking too, that identify them with Hifter.) Fighting at the site of the parliament lasted for several hours. Although the situation is foggy, it appears that the nationalist Zintanis are determined to prevent Mitig from taking power. The parliamentary vote that allegedly elected him has been contested as to its legitimacy.

A handful of officers of the Libyan army command in Tripoli held a press conference, in which they announced that parliament (the General National Council) had been suspended and that the (also elected) 60-member constitutional constituent Assembly (charged with drafting the constitution) would act as the parliament. (Parliament was supposed to go out of power in February but voted themselves an extra year in office, which many Libyans felt an illegitimate step). The officers say they want to maintain al-Thinni in power, and so also seem opposed to Mitig coming to power, and therefore are likely anti-fundamentalist. The officers included “Colonel Muktar Fernana, a Zintani former head of military intelligence” . It is not clear whether this clique of officers is connected to the two Zintani militias that attacked the parliament building.

The elected government disagrees that it has been prorogued and insists that it is still in power. Unfortunately, the elected parliament’s survival now likely depends on whether the bulk of the military and the militias rally to it rather than to the Zintanis, or the Fernana group, to to Hifter, which are likely three independent opposition power centers.

The nationalist military units and their struggle against Muslim fundamentalist civilian political forces (as well as extremist cadres) in Libya somewhat resemble the similar split in Egypt.

Hifter in Benghazi was linked to the CIA 25 years ago, and whisked away to Northern Virginia after his Chad-based insurrection against Muammar al-Gaddafi failed. However, lots of global south political figures have had relations with the CIA that did not continue, including several Afghan politicians who are now working against US interests. While it is possible that Hifter is acting in concert with the agency, it is not certain or even very likely (the Obama administration has supported the elected General National Council and is no doubt upset at the idea of it being overthrown. And, given the killing of 3 CIA field officers in 2012, which has led to endless GOP hearings, the Obama administration is likely not eager to risk more covert operations failures there). In fact, if you were casting about for an outside actor that wanted to see the Libyan Muslim Brotherhood and the Ansar al-Sharia crushed, you’d have to consider Saudi Arabia and the Egyptian officer corps (the latter being right next door).

Those who are blaming United Nations intervention in Libya for the continuing instability there are ignoring several things:

1. There has been no military intervention in Syria, and as a result 150,000 people are dead and several million displaced; even an unstable Libya has been far, far less troubled than Syria is.

2. There was no Western military intervention in Egypt (the West preferred Hosni Mubarak), but it has swerved toward military rule and violent polarization, too. The independent variable doesn’t appear to be Western intervention.

3. So the lesson is that revolutions are often messy. Nothing was more depressing than French politics in the 1790s, which swerved from terror to Thermidor to Bonaparte’s coup. Somehow you don’t hear so much about how we should bring the Bourbon monarchy back to France. The Gaddafists still carp from under the trash heap of history, but can’t possibly keep it up much longer. The Libyans have an open rather than a closed future now; there are lots of things they can do with it. Unfortunately, not all are necessarily positive. Still, an open future is generally better than a closed one.