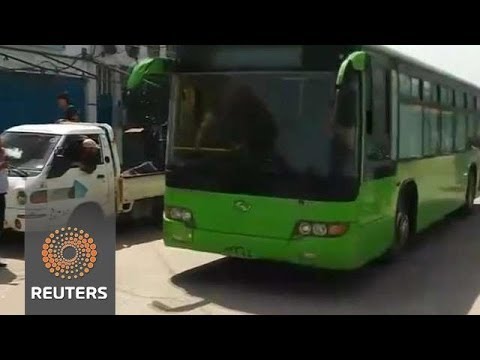 The Governor of Homs Province, Talal al-Barazi said Wednesday that 80 percent of the rebel fighters in that city have now been evacuated. It is expected that the rest will leave on Thursday.

Around a thousand fighters had been holed up in the old city of Homs and have now left, with 300 or so persons staying behind.

The regime’s retaking of Homs is not just an ordinary to and fro in a brutal, grinding civil war. It is a hands-down strategic victory for the ruling Baath regime of Bashar al-Assad. Homs is an industrial city of some 700,000 inhabitants, the third largest in Syria (a country of 22 million). It has a Sunni majority but a very large Christian community (at one point, at least, they were 1/3 of the inhabitants), along with minorities like Alawis. But neither size nor make-up explain its importance. Geography does. 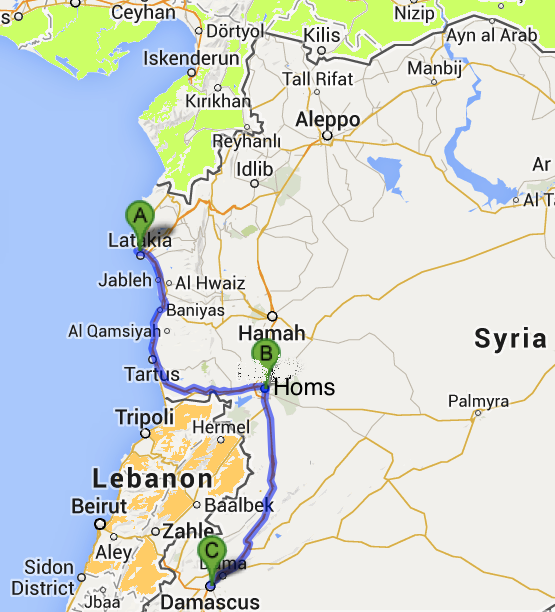 Damascus in the southwest of Syria needs resupply of staples, ammunition and weaponry. Some of that is brought in by air. More is brought overland by trucks from the port of Latakia in the northwest on the Mediterranean. The trucking route from Latakia to Damascus goes through . . . Homs. Another supply route runs from Tripoli in Lebanon through Hizbullah-held Hermel in the Bekaa Valley to Homs and then south to Damascus.

The rebel strategy last year this time was to take Homs (they held part of the city) and its hinterland, towns like al-Qusayr. The rebels, mainly Sunni Arabs and increasingly leaning toward extremist groups, hoped to use their dominance of Homs to cut Damascus off from both Latakia and from the Lebanese ports. At the same time, they intended to take the airports, including small military ones, so as to prevent resupply by air from Russia and Iran. Damascus would be under siege and gradually would weaken and ultimately surrender.

The rebel plan was defeated by several regime responses. The regime forces deployed massive and indiscriminate force on Homs, including aerial bombing raids. The rebel lack of an air force or anti-aircraft batteries was fatal. The regime also brought in strategic advisers from the Iranian Revolutionary Guards on how to recover Homs. Iran also asked the Hizbullah party-militia in Lebanon to intervene. In spring-summer of 2013, Hizbullah took Qusayr near Homs and helped in the assault on Homs itself. The Sunni rebel loss of Qusayr to a Lebanese Shiite militia was the first big setback to the rebel forces for some time. Until that point, they had gradually expanded the territory they held every month. In the past year, that rebel-held territory has shrunk somewhat. More important than the extent of the territory lost to the regime, however, is its strategic character.

There is talk of the regime trying to take the territory north of Homs, which would put the rebels in the north under siege.

But as I told Syrian oppositionists in 2012, it is possible that Bashar al-Assad will achieve something similar to what happened in Algeria, where the army won a civil war with the Muslim fundamentalists. The opposition’s decision to militarize was a serious error.

The Baath regime is by now guilty of war crimes and probably crimes against humanity. It would be very bad if it wins the civil war and its official receive impunity. On the other hand, the best fighters among the rebels, and the ones who control 70% of liberated territory, are increasingly Sunni extremists with ties to al-Qaeda. You wouldn’t want that crew to sweep into Damascus and take it over. Syria is caught between two unpalatable alternatives.

Shiite Iran likely views that retaking of Homs as a severe blow to al-Qaeda affiliates who hate and have massacred Shiites. One of these groups, the Islamic State of iraq and the Levant, is also fighting Shiite troops in Iraq.

In any case, no territory held by the rebels in the north or the far south of the country can cause Damascus to fall. Keeping Homs and taking the territory between it and the capital, putting the latter under siege, could have caused it to fall eventually. That plan has decisively failed.