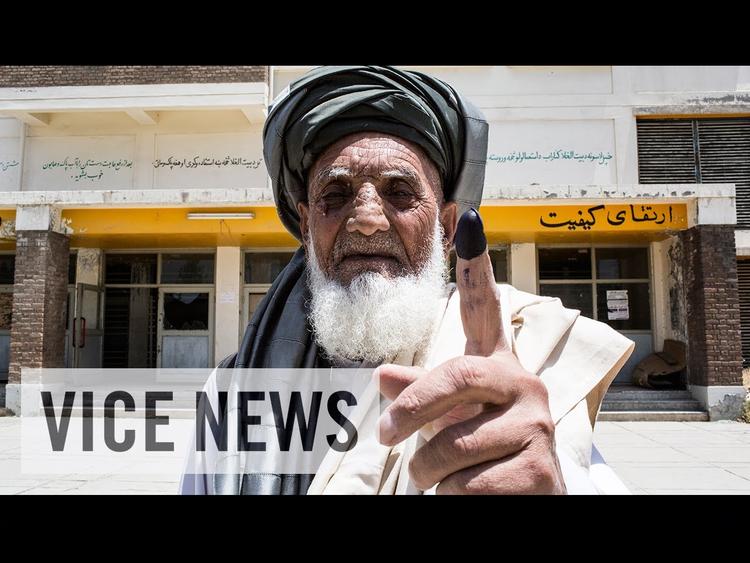 By Frud Bezhan via RFE/RL

KABUL — As allegations of fraud in Afghanistan’s runoff election pile up, protest movements have mobilized against what they see as systematic vote-rigging.

Two groups have taken the lead in protesting the June 14 presidential vote, holding separate demonstrations and sit-ins in several locations around Kabul. In various events that began on June 20, each has said it would not accept the results of the election and demanded an investigation into the actions of the country’s electoral bodies, which they accuse of engaging in electoral fraud.

The demands mirror those made by presidential candidate Abdullah Abdullah, who has said the election process is no longer “legitimate.” Abdullah has accused the Independent Election Commission (IEC) and Afghan President Hamid Karzai of orchestrating the election to favor his rival, Ashraf Ghani. Abdullah has also warned that any looming “crisis” is out of his hands.

The developments come amid unofficial returns that indicate that Ghani is poised to pull off an unexpected upset and win the election by as many as 1 million votes.

The protest groups say their demonstrations could turn to violence if their demands are not met. They have each pledged to mobilize tens of thousands of people in Kabul in the coming days in a show of force.

The Anti-Fraud Movement is one of two major groups that have taken to the streets to express their grievances. The movement, made up mainly of youths, has organized a peaceful sit-in Khare Khana, a predominately Tajik neighborhood in Kabul. Abdullah, who is half Tajik, has considerable support among Tajiks.

“Death to fraud. Death to those who have committed fraud!” These are among the slogans blaring through loudspeakers to a crowd of several hundred protesters assembled at the site on June 20. The group, which has already set up a dozen tents, says it is not affiliated with either of the candidates, although the majority who spoke to RFE/RL said they had voted for Abdullah.

“We want those ballots that are fraudulent and as a result of ballot-stuffing to be separated from the real votes cast by the people,” says Zabi Mehdi, a member of the Anti-Fraud Movement. “For us, it doesn’t matter from which camp the fraudulent ballots come from. We want them all of fraudulent votes thrown out.”

Mehdi predicts the movement will mobilize around 50,000 people for a mass protest on June 21.

“Our intention is to stand up against fraud committed during the election,” says Abdullah Khudadat, one of the organizers. “There is a lot of evidence that the IEC and the president were involved in fraud. We will not accept an election that has resulted from fraud.”

Many of the group’s members wear red scarves in a symbolic show of solidarity. Khudadat says the electoral bodies and the government have crossed a “red line” by being involved in fraud. Khudadat also says the red refers to the blood they are willing to shed to fight for their cause.

Although the protests have so far been peaceful, many members say they will resort to violence if their demands are not fulfilled, although they say this is only a last option.

Ethnic friction is also a concern, as Abdullah — who is half Tajik, half Pashtun — has strong support among the Tajik community. Ghani is Pashtun, the largest ethnic group in Afghanistan.

Abdullah’s supporters have made provocative remarks in the past week, threatening violence if their demands were not met.

Atta Mohammad Noor, the powerful governor of Balkh Province and supporter of Abdullah, posted a photo on Facebook on June 18. The photo depicted tanks making their way toward the front line during the jihad against the Soviet occupation in the 1980s. The accompanying text read: “To become president, Ashraf Ghani has to cross this border. Passing this border is impossible. A second generation of jihad is coming.”

Meanwhile, Amrullah Saleh, the country’s former spy chief and Abdullah supporter, said during an address in Kabul on June 19 that “resistance” needs to be waged against fraud.

Saleh’s National Movement, Besij-e-Melli in Dari, has also organized a sit-in protest for the past two days in Kabul. The grassroots political movement, which has adopted the color green, was inspired by the Arab Spring and Iran’s opposition Green Movement. It first emerged on the scene in 2011.

The Anti-Fraud Movement and the National Movement say they are not affiliated and say they will not join hands, at least for now.

The National Movement is hoping to organize its own mass protest on June 21.

One of the National Movement’s chief demands is the immediate suspension of the IEC’s chief electoral officer, Ziaulhaq Amarkhil, who is being investigated for possible ballot-stuffing. Amarkhil was arrested by Kabul’s police chief, General Zahir, on June 14 when he apparently left the IEC headquarters with several cars full of ballot papers.

“Some of our brothers have armed themselves because they are angry,” says Hasib Reyazi, a member of the National Movement. “This is not only our voice but the voices of people from Kandahar, Paktia, and Khost Provinces. The whole country is voicing our concerns.”