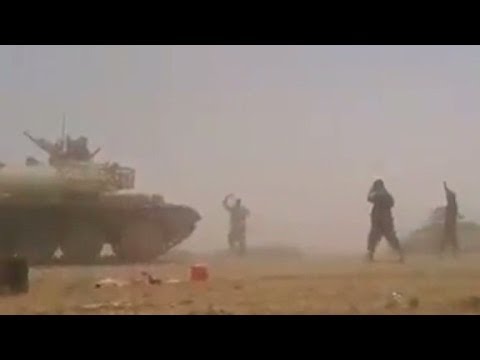 In March of 2003, we were treated to an intensive bombardment of Iraq, which the Bush White House propagandists termed “Shock and Awe.” As usual, the US Air Force practically promised us that if only they could throw down all their fancy munitions on the target country from the air, why, you might not even need those impossibly old-fashioned grunts in the US Army. We might be able to “decapitate” the nationalist, secular, state-socialist Baath regime that then ran Iraq, by killing its leader in an air strike.

Breathlessly, we were told that the US suddenly developed intelligence on Saddam’s whereabouts. The war began two days early because of this delicious possibility. The missiles were launched on a restaurant in Baghdad. Dozens of innocent diners were turned into red mist.

Saddam Hussein, of course, was never at the restaurant. Then the massive bombing campaign, 1,300 missiles, hit Baghdad, Mosul, Kirkuk. US military spokesmen insisted that the bombs were angled so as to reduce civilian casualties. But when you drop a five hundred pound bomb on a building, it creates shrapnel– the cement, the glass in the windows, go flying, into people’s skin and faces and eyes. Baath government and military buildings were targeted, in an attempt to destroy the Baath command and control.

The destruction rained down on Baghdad did nothing to forestall a war. The US and Britain still had to invade. As the troops rushed up to the capital some were surprised to see Iraqi troops discard their uniforms, put on civvies, and become guerrillas.

Lieutenant General William Scott Wallace got into trouble with Secretary of Defense Donald Rumsfeld because he revealed this development to the public: “The enemy we’re fighting is a bit different than the one we war-gamed against because of these paramilitary forces.” (The propaganda administration of Rumsfeld did not want any elements of reality escaping onto the tv screens). The US was expecting a conventional tank army. That they did destroy from the air in a great slaughter, film of which has never surfaced. But the quick transformation of elements of the Iraqi army into guerrillas and paramilitary took the US by surprise.

Some of the Iraqi military survived as guerrilla fighters. When it was reported that last week at Mosul ex-Baathists forced allied with ISIS in taking over the city from the Shiite government, what was being said was that the very force the Air Force had promised to pulverize from the air over 11 years ago not only was still there in Sunni areas but managed to participate in a rollback of the American project to install a Shiite-majority government in Iraq. The “paramilitary forces” that the US had failed to war-game against, as it concentrated on “shock and awe” from the air, had over a decade later again provoked a US political firestorm.

In the meantime, the US Air Force intensively bombed Iraq throughout the years of the occupation. We have this article from late December 2004:

“U.S. troops and warplanes killed at least 25 insurgents as they attacked an American outpost in the northern city of Mosul with a car bomb and explosives, the U.S. military said Thursday. One U.S. soldier died in hospital after the firefight.

The clash on Wednesday occurred after rebels detonated a car bomb near a U.S. outpost in the restive city. As reinforcements arrived, they came under fire by guerrillas using automatic weapons and rocket-propelled grenades, U.S. Staff Sergeant Don Dees said.

The Americans then called in an airstrike by warplanes, which attacked some 50 insurgents at the Yarmouk traffic circle, Dees said. “

The bombing campaigns targeted the resistance groups opposing the US occupation, some of which were bloodthirsty terrorists but others of whom were just… a resistance. The air strikes inevitably killed many civilians, despite US military denials. A study based on the conservative “Iraq Body Count” found that in Iraq, “46 per cent of the victims of US air strikes whose gender could be determined were female and 39 per cent were children.”

Shock and awe failed to awe the Iraqis, and all those years of air strikes on Mosul did not subdue it.

In Vietnam, the US Air Force engaged in what was called “carpet bombing,” using B-52s for wall to wall rolling strikes on the fields of the Vietnamese peasants. The Viet Cong just dug underground tunnels deep enough to escape the impact of the bombs, and hid out until the raids were over. All that carpet bombing did not prevent the US from being defeated by the Viet Cong.

Air power can be useful if it is employed in lending close air support to an attacking military force on the ground, which is itself made up of good fighters with popular support. American air power saved Kosovo from a Serbian massacre by helping repel Serbian armor and giving support to Kosovar irregulars. In Afghanistan, US air power helped the Northern Alliance win against the Taliban in fall 2001. But the Taliban were unpopular in Mazar, Herat and Kabul, and the Northern Alliance was welcome in those cities. The same tactics did not succeed in Qandahar, which is in some ways still significantly Taliban territory.

US air power alone would be unlikely to dislodge ISIS from Mosul at this point. The Sunni insurgents look more like Viet Cong (local defenders) than they do like outside attackers (Serbs, Taliban in Mazar). Where the enemy has some local support and is defending, air power has a long history of failure.