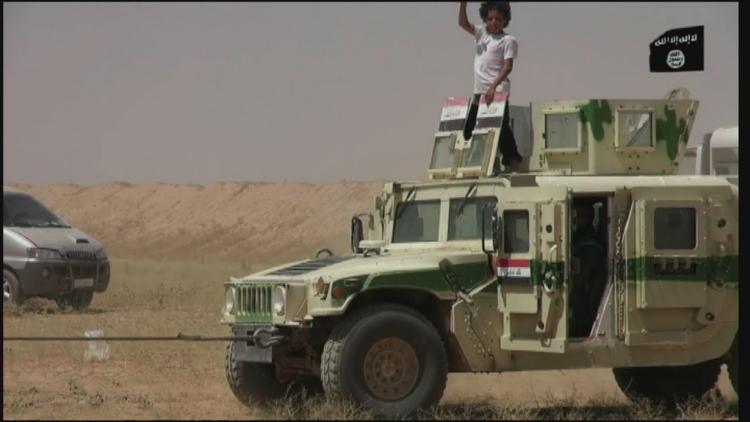 Ibrahim al-Badri, a run-of-the-mill Sunni Iraqi cleric, gained a degree from the University of Baghdad at a time when pedagogy there had collapsed because of the Saddam Hussein dictatorship and international sanctions. After 2003 he took the name Abu Bakr al-Baghdadi and turned to a vicious and psychopathic violence involving blowing up children at ice cream shops and blowing up gerbils and garden snakes at pet shops and blowing up family weddings, then coming back and blowing up the resultant funerals. This man is one of the most infamous serial killers in modern history, with the blood of thousands on his hands, before whom Jeffrey Dahmer and Ted Bundy fade into insignificance.

Al-Baghdadi leads the so-called Islamic State of Iraq and Syria (ISIS or ISIL), which today changed its name just to “the Islamic State.” And its members made a pledge of fealty to al-Baghdadi as the “caliph.” Let us please call it the “so-called Islamic State,” since it bears all the resemblance to mainstream Islam that Japan’s Om Shinrikyo (which let sarin gas into the subway in 1995) bears to Buddhism.

After the death of the Prophet Muhammad in 632 in Medina, West Arabia, the clans of Mecca favored as his successor notables of his noble clan, the Quraysh (the “Little Shark Tribe”). The first three were Abu Bakr, Omar and `Uthman.

Some clans in the neighboring city of Medina preferred a dynastic principle, wanting to see a close relative of Muhammad succeed him as his vicar. They favored Ali ibn Abi Talib, his cousin and son-in-law, i.e., the closest thing he had to a living son at the time of his death. Ali was passed over three times by the notables in Mecca but finally became the fourth caliph in 656 AD. He was, however, assassinated in 661 only five years later. Those Muslims who accepted the first four “Orthodox caliphs” gradually became known as ‘people of the tradition,’ or ahl al-sunnah, i.e., the Sunnis.

The groups that became the Shiites think of Ali as the first vicar of the Prophet, or “Imam,” and believe his office should rightfully have gone to his sons Hasan and Husain, and then to Husain’s son, and so on through the generations. Most Shiites today believe that the Twelfth Imam disappeared as a small child but will one day reveal himself again and restore the world to justice, as the Mahdi.

After Ali’s assassination, the Umayyad kings ruled (661-750), and though some scholars have found that they claimed religious charisma, they were just Arab kings. A branch of the family of the Prophet tracing itself back to his uncle Abbas began making claims to rightful rule, however, and they were popular among the new converts from among the Persians in Iran, and in 750 they made a revolution against the Umayyads. They became the Abbasid caliphate, ruling until the Mongol conquest of Baghdad in 1258.

The Abbasid caliphs gradually separated out their religious authority from secular authority, and later on rulers like the Buyids took Baghdad and gave the caliphs a stipend and limited the reach of their authority. Ira Lapidus argued that there was a de facto separation of religion and state in the Abbasid period.

After the embarrassing end of the caliphate at the hands of the Buddhist and animist Mongols, some attempts were made to revive the institution. They failed. The Mamluk state in Egypt in the medieval period maintained that a relative of the last caliph had escaped the Mongols to Cairo, and they maintained what some have called a “shadow caliphate” (Khilafah suriya) or pro forma caliphate. I don’t know of any Muslims who know the names of those supposed caliphs, or who refer to any of their rulings. I doubt they were widely recognized.

Although subsequent sultans or secular emperors sometimes were termed “caliphs” in flowery style by their courtiers, I can’t find any evidence of anyone taking that sort of thing seriously. In the 18th century Ahmad al-Damanhuri, a rector of al-Azhar Seminary in Cairo, the foremost center of Sunni learning, wrote an essay in which he was frank that the caliphate ended in 1258, that the Mamluk ‘shadow caliphate’ hadn’t amounted to much, and that the Ottomans were kings, not caliphs. The Sunni caliphate had lapsed. He said, however, that some of the Ottomans were better and more just rulers, as secular monarchs, than some of the caliphs had been. I know of no reason to think that al-Damanhuri’s views weren’t the prevailing ones on the eve of Middle Eastern modernity. {Ahmad al-Damanhuri, al-Naf` al-ghazir fi salah al-Sultan wa al-wazir, Egyptian National Library, Taymur Ijtima`, MS 34, p. 10).

Ottoman Sultan Abdulhamid II (1876-1909) was concerned about European encroachment on Ottoman and Muslim lands (white Christians conquered Muslim-ruled states of India beginning 1757, Muslim Central Asia through the 19th Century and Algeria in 1830). The Iranian diplomat Mirza Malkum Khan cabled the shah back in Tehran in 1880 that Abdulhamid had decided to declare himself a caliph so as to turn the tables and claim authority in places like British India, where 1/4 of the population was Muslim. Although the idea that the Ottoman sultan was a caliph gained some purchase in British India, I don’t think it was widely accepted. British interviews with Egyptians after they conquered that country in 1882 suggested that Egyptians didn’t see Abdulhamid as a caliph.

Abdulhamid, despite saying he was a caliph, was overthrown by a democratic revolution in 1908-1909, which instituted a constitution and a parliament and tried to reduce the sultan-caliph to a figurehead. In early 1913, Young Turk military officers, however, made a coup and sent parliament home. They unwisely took the Ottoman Empire into WW I in alliance with Austria and Germany. Mehmed V, the new sultan-caliph (now relatively powerless) used his bully pulpit to declare jihad or holy war on France, Britain and Russia. The Ottomans were nevertheless defeated (and Indian Muslim troops helped in the defeating). After the war, the British and the French divided up the Ottoman provinces among themselves. Nationalist, secular general Mustafa Kemal refused to see Anatolia or Asia Minor, the heartland of Turkish speakers, divvied up, and launched a war to stop it. He won. The Turkish state came into being. Its parliament declared itself a republic in 1923. In 1924 it abolished the caliphate.

The end of the caliphate did not matter to most Muslims. You don’t need a caliph to pray five times a day or fast Ramadan. In Egypt, Ali Abd al-Raziq, a court judge, argued in modernist fashion that no caliph is necessary. Some Egyptian clerics were uncomfortable with the idea, but they lost the argument. There was some jockeying to resurrect the caliphate in the mid-1920s, and the Egyptian king, Fuad I, threw his crown in the ring. But the fact is that none of the newly forming nation-states wanted a transnational authority like that, and no consensus could be reached, and the caliphate (such as it was, since I don’t think most Muslims bought into Abdulhamid’s project) lapsed again.

Small groups of cult-like fundamentalists ever after hoped for a restored caliphate, but it isn’t something on the minds of 99% of the world’s 1.5 billion Muslims. Sunni Islam has come sociologically to resemble Protestant Christianity, lacking a formal center and largely organized on the basis of the nation-state. Thus each Muslim-majority country has a mufti, who is the highest legal authority, giving rulings on practice for the state. Ask the muftis, who have real authority backed by Muslim states, what they think of the serial murderer, al-Baghdadi.

I remember in 2004 Usama Bin Laden issued a speech in which he complained about the calamities rained down on the Muslim world by the European Christians ‘for the past 80 years.’ He was referring to the abolition of the caliphate by Ataturk in 1924. His theory was that without a caliph Muslims were easily divided and ruled by the great powers. The flaw in that theory is that the Ottomans claimed to be caliphs toward the end of the empire but the Great Powers still divided and ruled them. It is hard to argue with military power, and fancy religious titles won’t win such power struggles. Even the original Abbasid caliphate was ended by pagan Mongol steppe warriors who had lacquered, reticulated short bows that they could fire from horseback and which could penetrate armor. (Mongols had very sophisticated fletchers).

In fact, making grandiose claims on authority was common among Muslim leaders resisting the European colonial powers Often their followers thought that such leaders had the power to deflect European bullets and cannonballs. The popular Muslim notion of a Mahdi or rightly-guided figure who will be sent by god at the last days (sometimes, it is thought, at the same time Christ returns) was invoked for anti-colonial purposes on several occasions. A Mahdi or messiah rose up against the French in Egypt in 1799. The French killed him. Another Mahdi arose in the Sudan in the 1880s. The British defeated his army, killed his successor, and then went on to rule the Sudan until 1956. Muqtada al-Sadr in Iraq created the Mahdi Army, intended as a force to support the Mahdi, who he thought was about to appear, and which took on the US and British militaries in 2004; it lost on the battlefield.

And, of course, Mulla Omar Uruzgani of Afghanistan was proclaimed “caliph” by the Taliban and al-Qaeda. Hopefully he and al-Baghdadi will end up in the same jail cell so they can drive each other crazy claiming to be the real caliph. In fact, virtually no one in the Muslim world thinks Mulla Omar is a caliph.

The Egyptian Muslim Brotherhood developed the institution of the Supreme Guide, which under President Muhammad Morsi in 2012-2013 developed theocratic aspirations. The Supreme Guide, Muhammad Badie, proved conspiratorial and controlling, and Morsi proved compliant. The vast majority of Egyptians were annoyed by this grandiosity, and they overthrew the Muslim Brotherhood government. Badie is in danger of being executed. I think that the Egyptian elite has gone too far in persecuting Muslim Brothers and branding them terrorists, mind you, and the death sentence on Badie is a human rights violation. But I’m just pointing out that calling yourself Supreme Guide and getting the loyalty of a sectarian group is no guarantee of worldly success. And the Brotherhood is way more important the the ‘Islamic State.’

This Baghdadi ‘caliphate’ thing is doomed, as well.

You want to see the future of Islam, look at the al-Nahda or Renaissance Party in Tunisia, which just successfully completed a term in office in coalition with a secular human rights-oriented party and a socialist party.

ITN: “The Islamic Caliphate is declared by Isis ”